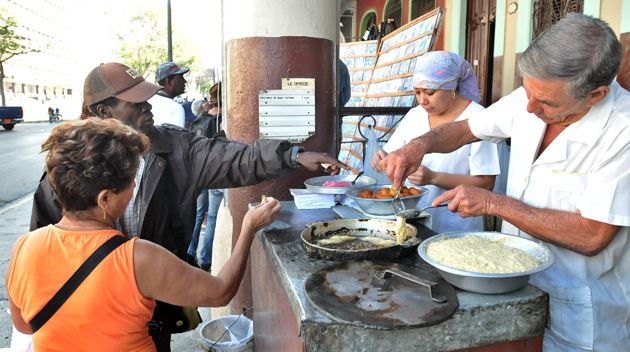 Throughout Havana there are thousands of street vendors specializing in rustic cooking. They sell fried food and heavy croquettes. Some like Ignacio prepare the coating for their fried items with wheat flour, salt and chives. Jose Antonio merely adds a commercial seasoning mix. Yoana prefers to craft hers from yams or corn meal. They are not bad if eaten hot.

Cold is another matter. A greasy packaged ball that tastes like plastic. In the capital croquettes often are not made by the vendors themselves. They usually buy them from special fish markets and then resell them for a 50% profit.

Right now only the cheapest foods can bought with the national currency. A packet of ten croquettes costs 5 pesos. They are within everyone’s budget, though no one knows with any certainty what is in them.

Some say they are made with claria* or catfish. Others claim they are prepared with fish byproducts. And one person, who is said to have worked in a place where croquettes are produced, swears they are manufactured with chicken skin. No matter. They are the gastronomic wild card of the elderly, retired people, students, tramps, the unemployed and laborers.

The pair of “mystery” croquettes that you have for breakfast are the same as those they serve your children for school snacks. They are also routinely used for lunches or other meals along with the inseparable white rice, chickpea soup or black beans, and tomato salad.

If a street vendor does not have his own covered wagon, a guy who owns some old wrecks will rent him one for 50 pesos a day. Before dawn the vendors heat the cooking oil in a big cast iron pot. When the flame is going strong, they will fry the little flour balls. They often fry hundreds of items using the same oil. They cook the croquettes over medium heat.

Some fried food vendors sell the croquettes for a peso apiece. The more clever ones offer a piece of bread with two croquettes for 5 pesos. Creole food is washed down with a soft drink for two pesos a glass. Hundreds of students and workers head to their schools or factories for a quick breakfast of fried food or croquettes.

For most Cubans a breakfast of scrambled eggs with bacon or ham, buttered toast, orange juice and cafe con leche or hot chocolate is something only for rich people, business executives or government ministers. Or it is simply an extravagance one only sees in foreign films.

In Cuba the normal breakfast consists of coffee without milk, the ration book’s allotted 80 grams of bread per capita topped with homemade mayonnaise or oil and garlic.

Fried food vendors gained notoriety in the 1990s during the bleak years of the “special period,” an era in which nutritional needs were satisfied with grapefruit skins and orange leaves. Or warm water with brown sugar, the famous “chicken soup.”

There were some lazy scoundrels who made money selling pizzas by replacing the cheese with melted Chinese preservatives. During this period people lost weight as though they were in a Finnish sauna and developed exotic illnesses like beriberi and optical neuritis.

It was then that the olive-green autocrats pulled out of their sleeves a list of concoctions developed by nutritional experts. In their laboratories they had designed foods to fool the stomach – New Zealand yam pasta, fricandel, dogmeat, meatless meat flour, Cerelac, powdered chocolate milk, and tacos, presumably Mexican, with black beans.

The father of all these inventions is Fidel Castro. An untiring nutritional researcher who at age 86 has proudly declared the moringa tree to be the food par excellence for Cubans of the future. The jewel in the crown was a ground meat product made with beef, pork or chicken by-products bound together with some 60% soy. Its official name was “extended ground meat,” but people called it “extended soy.”

It was a surprise to Havana’s butchers. At night, under cover of darkness, they poured gallons of water over containers filled with the revolting stuff. The concoction grew, according to them,without losing its essential qualities. It is perhaps the only food product developed in Cuba that approximates the biblical parable of the loaves and the fishes.

For the moment the bleak years remain in the past. But the issue of food is still the number one priority for the average Cuban.

Without McDonald’s, Burger King or KFC’s fried chicken, fried flour and croquettes made from unknown ingredients are all the rage in Havana. Of course, they cannot compare to a sandwich from Miami, a potato omelette from Madrid or a Turkish kebab from Berlin. But they are selling like crazy all throughout the city.

*Translator’s note: An invasive species of catfish, introduced into Cuba from Asia in hopes it would help alleviate food shortages.