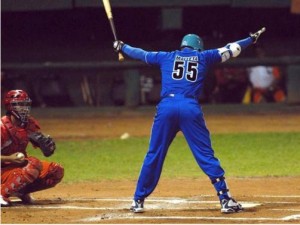 For 20 years baseball on the island has been going backwards. Apart from the more than 300 ball players that have deserted to play as professionals in different circuits of the Caribbean and the Major Leagues, the sports authorities have caused a flagrant decline in the quality of Cuban baseball.

When in 1991 the right-handed pitcher from the town of Regla, René Arocha, abandoned the gathering of the national team that was training in the United States and for a little while played in the major league. It was the beginning of a constant drip of ballplayers that jumped the puddle with the illusion of earning six figure salaries.

In Cuba, a baseball player earns a worker’s salary for playing all year round as a professional would. The absence of many of the best talents has accentuated the crisis that exists in the national pastime.

Also, the complete nonsense coming from management. In the mid 90’s, they forced more than 100 great players with outstanding performance in the national season to opt for retirement.

This ‘voluntary’ retirement continued in the first decade of the 21st century. Supposedly, it was to clear the way for new recruits to baseball. In Cuba a player of 35 years is often seen as a useless eyesore.

The statistics in any league that is respected show that it’s precisely after 30 years that a baseball player matures and has a stable performance. Another phenomenon that has lowered the standard of local baseball is that in the ranks of juveniles and cadets, many prospects jump the fence and leave for the United States.

Right now, the worrying thing is not what we’re seeing in the current Cuban season. Which is awful. If not what awaits us in the near future. Look, if in the 80’s the national classic was categorized with a Triple A status, in this winter of 2011, the national campaign shows numberous ghosts to reveal a severe crisis.

Take note. In the so-called ‘Golden Series’, the 50th after Castro took power, the collective offense of the 16 participating teams is 293. Pitching exceeds 5 earned runs per game and with teams like Metropolitan and Las Tunas are around 7 points per game.

To this nefarious pitching, add in a defense of schoolyard level. The gloves are ripped. It is fielding for 972. In a decent league, is often hitting 260, the pitchers work for 4 runs per game and fielding to 980. These numbers confirm that baseball is played today in Cuba is jungle.

Jose Dariel Abreu, Cienfuegos team’s slugger, about 6 feet tall and 260 pounds, looking like a big leaguer, is averaging a homer every 5.75 at-bats. Joan Carlos Pedroso, a black first baseman in the ninth Las Tunas usually sends the ball regularly over 500 feet, and connects a home run every 7 times at bat.

Not even Babe Ruth hit with the frequency. But the worst part of Cuban baseball is the pitching. It’s laughable. You can count on the fingers of your hands–and you might have fingers left over–the high level pitchers.

On average, the current Cuban pitchers do not exceed 85 mph. Their repertoire is complete with a mediocre slider. And counting. To this add the alarming lack of control. In Cuban baseball, pitchers usually give 5 bases on balls per game.

Then, of course, that hitters are having a field day. With 22 games remaining to conclude the regular season of 90 games, 5 rookies are collectively batting over 300.

The usual markers of a baseball game is 10 runs for 7.15 for 11 and so on. It looks like water polo. The solution of the hierarchy governing island baseball is to bring in Japanese trainers to impart accelerated courses in the backyard techniques.

One more mistake. Japanese baseball, of undubitable quality, has little to do with the idiosyncrasies of Latino baseball. I can not imagine running a Cuban pitcher running 15 miles and throwing 100 balls every day in their preparation, as is common in Asian baseball.

In general, a pitcher of that part of the world has a sporting life of seven to eight years. The baseball that we should look is closer, 90 miles to the north. With scientific training methods, a vast technical literature and careful statistical headings that include all of the games.

But the Castro brothers don’t want to open the door for the young stars to compete in the Majors. While they continue in their mistaken policies, the local ballplayers will climb aboard anything that floats with the objective of being able to play in the best league on the planet.

And the local fans are quitting going to the stadiums. They would rather see a European soccer match. That’s what’s happening.