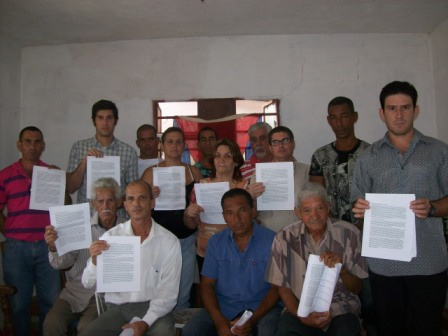 Weeks ago the Neighborhood Spokespeople sent a group of citizen demands to headquarters of the People’s Power National Assembly regarding public opinion about the measures of December 2010. These were gathered over months by the different bodies and no response has been received.

This disinterest shown by the different channels of the People’s Power with regards to the Neighborhood Spokespeople petitions led the activists to decide on a legal remedy, faced with the exhaustion of the channels established in the law.

The idea of filing a formal complaint against the People’s Power mechanism is motivated by the immediate signs and fears among officials and agents, recalling the bitter case of Vallin and the Law Society to remain silent as in the previous response.

But to repeat the dose with the spokespeople’s petitions would make no sense, to run the experiment again could be fatal to the aspirations of the General. He knows the urgency of institutional credibility and also the needs of the unicameral assembly, where abstentions and no votes could be points of departure for new processes.

So the logic is not to err again but to gain time feigning that the institutionality is a sacred act of this mechanism. Of course, that this is not the highest authority who is accountable to the spokespeople of the District, but the establishment of the base which is responsible for offering a rhetoric of little death to these people and ending the problems for the time being.

The trite ritual this Saturday was revealed when the President of the Popular Council of Punta Brava after months in limbo and without the slightest importance to the issues raised called on one of the spokesmen of the District to give an accounting of significant advances in the areas of high demand. Demands now being followed in the same path but disguised with a different political hue.