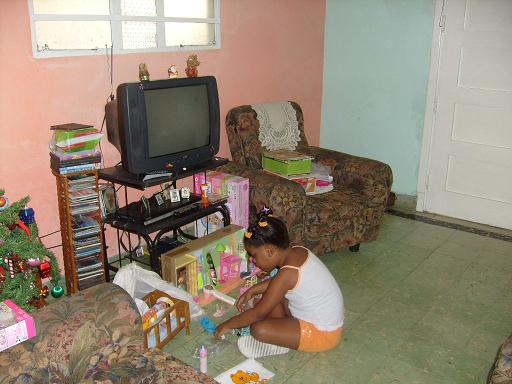 On the eve of Three Kings Day, Melanie Garcia, 7 years old, feels that the hours take years. At 5 pm she wants to go to bed, to shorten the time. Intensely she lives the hope of getting up before dawn and discovering what new toys the Three Wise Men from the East brought her.

In spite of everything, the tradition has been maintained for centuries. It’s been a dangerous crossing. Families wanting to keep the custom have fought against an atheistic state that decided to bury it five decades ago.

Fidel Castro struck the first blow to the magic world of children in the ’60s, when he distributed three toys per child by state decree. He decided to become the only Wise Man.

He even changed the months. He exchanged January for July, a month where they sold toys by the ration card. Just five days after coming down from the Sierra Maestra, he sent a message round to all segments of society.

From a war plane he dropped thousands of toys to children living on the hillsides of the eastern provinces. The idea wasn’t bad. They were kids who were dirty and full of parasites, whose only toys were chickens and pigs.

But after the altruistic gesture he sent a coded message in red: from now on, the State would appropriate tasks hitherto performed by Catholic and social institutions. Then you know what happened.

January 6 disappeared as a holiday. In his 52-year-long journey through the honey of power, Castro sought to undermine the religiosity of the population. Temples were closed. Some priests were expelled and others disparaged.

In pursuit of building the first communist society in America, many things had to be changed. And Three Kings Day was one of them: they considered it a petty bourgeois backwardness. More important than the toys, U.S. imperialism was to be buried in the dustbin of history.

Boarding schools prepared children and young people to be future soldiers of the country. The theme was “study, work and rifle.” Five decades later, the same government decided to sweep under the carpet part of its original sins.

Long ago, toys were removed from the ration card. Now they sell for hard currency, available only to families that receive remittances. These days, shopping at the Commodore Center, west of Havana, is a madhouse of parents buying toys.

The offers vary, but the prices go through the roof. A game is over $100. A bike, the same. A doll with a battery that says three sentences costs more than $60. Barbies, which you can have for $50, are piled on one part of the counter. The cheapest toy is equivalent to two months’ salary for a worker.

January 6 is just one more date to the Cuban authorities. There are no parades through the streets of the city. But if you wake up early that day, in the neighborhood you will hear the din of the little ones, finding a toy in some corner of the house

There are other happy moments for children on the island. But the Day of the Kings is the icing on the cake. If you have any doubts, just ask Melany Garcia.

From Tania Quintero: “My granddaughter Melany with the toys that the Kings brought her on January 6, 2009. See, on the left, the cradle of wood, there are still carpenters in Cuba who make them, just like 60 years ago, when I was a child. I am glad that this tradition has not been lost in a world of increasingly sophisticated electronic toys.”