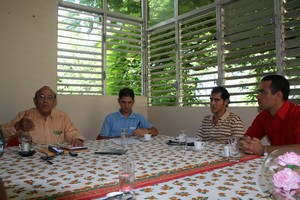 Every day Cuba is more of an island than ever. A sector of the official intelligentsia is engaged in an interesting debate on the future of the country. It’s something that’s needed. I don’t think it’s the shock troops of Cuban Intelligence, as a certain sector within the opposition insultingly suggests.

Simply something is moving. Both bloggers — we call those accepted by the government, within this movement there are many nuances — as well as figures within the national culture use new information tools to reflect their points of view.

I’m not naive. In Cuba spontaneity is rare. Certain government sectors, to counter the phenomenon of alternative bloggers, have encouraged the intellectuals who defend the irreversibility of the revolution, who with their talent, in their proposals, reports, articles and analysis, assume the need to maintain a project created by Fidel Castro in 1959.

Is good that journalists of the caliber of Reinaldo Taladrid, Rosa Miriam Elizalde and Enrique Ubieta sharpen their pencils and make known to us their keen observations.

Their works, which I sometimes do not agree with, are better and more substantial than the soporific political speeches of the island’s hierarchy. The evil background of this supposed “Battle of Ideas” is an unwillingness to accept the other side.

And it exists. They live in the same country and think differently. I would be disappointed if people who I appreciate professionally, such as Sandra Alvarez or Elaine Diaz, bloggers accepted by the government and of unquestionable quality, fall into the cliché of the official discourse, of labeling all who disagree with the Castro brothers, with the crutch of ‘agents of the empire, mercenaries or traitors.”

Any ideology or political system leads to resistance. To fail to recognize it is to deny the dialectic. Unanimity does not exist. A government cannot govern only for its supporters. In democratic societies, the various factions argue and talk to each other. In Cuba, each side is entrenched in an islet. And they fire their missiles. They read what the opposite group writes sideways. But always at hand they have the little sign that some are “puppets operated by the State ” and others, “mercenaries paid by the empire.”

If the Cuban revolution is considered a mature and consolidated project, it need not fear open and respectful debate among Cubans who think differently. Enough of monologues. There should be a dialogue.

I find it incomprehensible that journalists, analysts and foreign scholars can debate with people who advocate socialism and these intellectuals cannot even say hello to citizens whose “sin” is to not agree with the Castro brothers.

What is at stake is not to tear the system down and implement capitalism as Enrique Ubieta believes, director of La Calle del Medio, the only readable newspaper on the island.

It would be very pretentious to think that bloggers barely known in Cuba, by dint of posts that are read only by those the other side and 0.2% or less of the Cubans, will create a climate of opinion to unseat the established status quo.

Were it to happen, it would be the first blogger revolution in history. Let’s not fool ouselves. Yes, new tools such as the Internet, Twitter or Facebook have a remarkable drawing power. But only when the deterioration of a nation, its citizens’ complaints and malfunctions of the country’s economy articulate a widespread discontent.

If things in Cuba are distorted it’s simply from inefficient government management. If there is a sector of society that asks for deeper changes it is because the present does not meet their expectations.

What has devalued Marxist socialism is incompetence. It has not worked. Nowhere. And not for lack of professionals and resources. True, in the utopian communist society there is no lack of material and money is not needed. Nor is the army or the police to suppress or tough guys with State Intelligence making your life impossible.

But we must keep our feet firmly planted on the ground. And to be human, to truly evolve, we need freedom, confrontation of ideas, dialogue and to listen to the other party.

The point that most worries closed governments such as Cuba’s is information flow, and therefore they control it because they find it easier to govern. They also inconvenience people fleeing the tight state control.

I think the followers of the revolution driven by convictions. If so, they are honest citizens. So why not have a face to face dialogue?

If, in fact, the supporters of Cuban socialism have solid arguments, I do not see why they’re so afraid to discuss eye to eye, and not in virtual forums. Please Ubieta and company, show that you are free men.

Photo: Max Lexnik, journalist in exile in Miami, with bloggers from La Joven Cuba, a blog of Cuban university students. Transcription of the first part of the meeting.