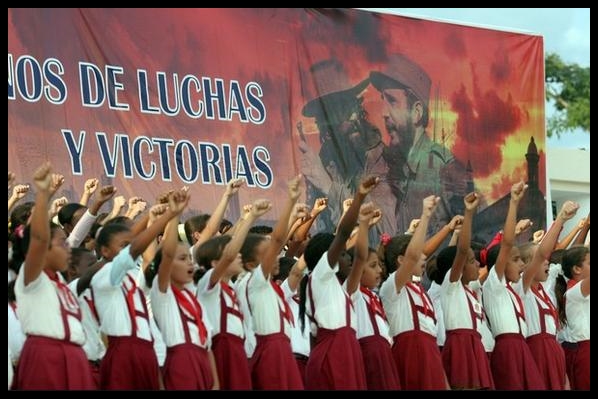 How do you explain to Mr. Herman Van Hooff, Director of the UN Regional Office of Culture for Latin America and the Caribbean for UNESCO, that Cuba lies in all its public statistics?

Director Van Hooff declared this past Wednesday, February 5, that “Cuba holds a recognized position at the world level with high indices of implementation of the objectives of education for all.” (As reported in the newspaper Granma.)

To read the official reports and be guided by them is to fall into a fraudulent game. For a full appraisal, if you want an honest one, I advise you to read the blogs and news reports of independent journalists, who by practicing ethical principles in writing the truth, are beaten, harassed and imprisoned, for writing about the prevailing daily reality in the Cuban archipelago.

Those of us who have kids can say how truthful the daily journals are, making us the unique source able to bear witness, only to take the chance — without any interest other than expressing the truth — of being put in a punishment cell: The schools lack teachers from the primary levels, the great majority of them without skill or the base of minimal knowledge indispensable for the job, to such a degree that the pupils correct the teachers’ basic spelling mistakes on the blackboard.

This began with the great fiasco of “Emerging Teachers” — luckily the last of the mega-plans of Fidel Castro, who thought that only by having the idea occur to him and his fondness for incentives for the pedagogues would the country’s grave problems in education be solved with these “teachers.”

They were a force of teenagers without a base of knowledge facing the classrooms. They committed the most brutal crimes of a human being, like killing a pupil by beating him with a chair in the basic secondary school Domingo Sarmientos, in the Havana neighborhood of Lawton, which only came to light through independent journalism.

Minors were raped, teenagers got pregnant, they committed thefts in the same schools where they were assigned, as well as  pederasty, bribery, and  fraud at levels never before seen.

I can assure the UNESCO representative that in a great part of the educational centers, which I know in Havana by witnessing these arrangements, any student who presents 5 CUC automatically passes; that the “teachers” who receive special attention, invitations and generous gifts from the parents give preference to these kids, according to the scale of the acquisitive level that they present, preventing disciplinary action by giving gifts of more money, although really the kids have been suspended. 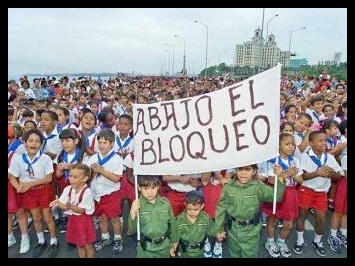 Photo: “Down with the blockade.”

Mr. Herman van Hooff, I claim it’s not a fallacy or a hoax: the actual president of Cuba, in his speech this past July 26, 2013, recognized and corroborated the abysmal education of the youngest generations, because a large part of those who went before found themselves imprisoned for various crimes, sometimes the only path taken to alleviate the general crisis, when emigration wasn’t possible for them.

Mr. van Hooff, when Fidel Castro came to power, one of his most sensationalist media slogans was, and I recognize that it was laudable, “to convert military barracks into schools.”

Today some of those schools “in the countryside” are converted into prisons, spaces of savage humiliation for those young people who lost their way toward doing good, or really the offered political circumstances suppressed in them all possibility of surmounting obstacles and improving their lives.

These schools are perfect concentration camps, centers of forced labor, cheap labor in the style of colonial slavery, with no medical attention, overcrowding and starvation. They are places where the officials teach them what they need to later exploit them, and which follow the civil tradition of bribery to receive the diploma for the courses studied, and they can receive as a benefit the reduction of two months a year.

For a climax, Mr. Van Hooff, you make this official declaration on the only days that the dictatorship used a group of kids dressed in the Pioneer uniform to repress, in a crowded public street, the political opposition, surrounding the house where they exercise the right to think freely, which heightens my attention and makes me doubt your honesty and sense of justice, since your duty, not only as a member of UNESCO but also as a human being, perhaps as a father, should be that of protesting because the kids are so young, and the event is worthy of the best times of Hitlerian fascism.

Civil servant Van Hooff, I have no reference to your ideological inclinations, but good feelings don’t have political affiliations; thus, we have to agree that if the Cuban state says publicly that “the universities are for revolutionaries,” and by having adverse opinions, different ways of thinking that don’t support the regime’s plans, students are expelled, which happens habitually, this prevents those young people from being educated. Surely, looking at the inside reality of what occurs in the country, we can agree that this is a Nazi position.

No, Mr. Herman van Hooff, in no manner can we consent to your complicity in the misrepresentation of our reality, making yourself an echo of that which isn’t true, of your appalling work as director of the so-called Regional Office, especially when stating the truth is costing us human lives, family divisions, and pain in dungeons of punishment.

You, intending no offense, repeat like a parrot that which the totalitarian regime delivers to you to read. Please! Go see the Cuban people yourself, walk their streets, earn the money that is contributed to your organization, don’t accept easy answers or a lack of impartiality, and then report what you have accomplished with what they entrusted you with. I assure you that your irresponsibility provokes major evil in Cuban society, and in our search for the dream of freedom.

If you respect the dictatorship, as you insist, prove for yourself that these statistics are true, and then the rest will respect it. In no way Mr. Van Hooff, should you be guided by those romantic dreams of the 1959 revolution, the excessive personal ambition of Fidel Castro that truncated and killed the hope of a nation, by putting into practice his dictatorial system that keeps him in power, by the mediation of his brother, Raúl Castro.

The three most important factors, health, education and sports, were flags that for years “justified” or hid the true interest of the government from outside view. The initial enthusiasm stopped, and today the hospitals resemble the catastrophe in Haiti after the devastating earthquake. In the same way follows the inefficiency of the education system and the abandonment of sports centers and attention to the athletes, so that abandoning your country and family members has become common among the most important sports professionals.

Finally, Mr. Van Hooff, you more than anyone should know that in Cuba for several decades they have imparted indoctrination, and thus this society is missing spirituality. Education is directed to the unique end of rejecting all philosophy except the Marxist one, which is nothing more than the armor which the monarchy, the Castro family, has been hiding behind for more than half a century.

Some day we’ll know how and why the dictatorship made it so easy to manipulate international institutions and manipulate them to its own vision, when the truth could be found in many reports. Let’s hope it was by from gullibility and not from what I suspect