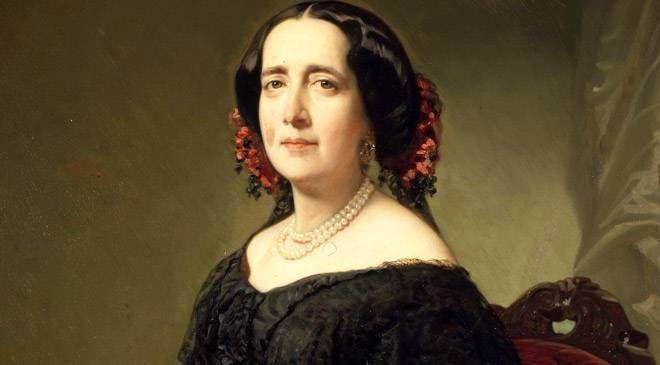 The recent declaration of the birthplace of Gertrudis Gómez de Avellaneda (Camaguey, 1814-1873) as a National Monument on the 500th anniversary of the city’s founding, originally named Villa de Santa María del Puerto del Príncipe, (today, Camagüey) awakens in me the evocation of a special woman who has always resonated in my spirit.

Tula is that great poet who once chose the pseudonym La Peregrina to publish her poems, never imagining that over 150 years later, this obscure writer would borrow her familiar name to use as the distinctive signature of my own work. Because Tula Avellaneda was my first pseudonym as citizen journalist, a personal way to hide my identity behind the name of a Cuban for whom I have great affection, admiration and respect, as if she were a close friend. The strength of her dynamism was a kind of symbolic shield in the process of exorcism against the demons of fear. Tula is, in short, the only woman for whom I secretly keep a friendly complicity not devoid of a trace of envy.

Because, you know what? I’ve always preferred the Tulas over the Marianas. The nineteenth century was rich in extraordinary Cuban women. Most of them, however, went down in history for their relationship with the wars of independence, and in particular for their link — either maternal or marital- – to men who were the protagonists of these military contests. A few were warriors themselves, so they transcended as patriots for a nation that, unfortunately, has always rendered greater worship to violence than to poetry, love, and literature.

To date, the women warriors are “Marianas” (after the Grajales saga, enjoining her youngest son to grow up to go to war for an ever bloodthirsty Motherland), but, by the same token, they were relegated to the perfect stereotype of the patriotic stoicism that offers the glory of the memory at the same time that it strips away humanity, to such an extent that I can’t recall any portrait of Mariana Grajales where she is smiling, or at least with a kind and loving facial expression. In fact, her effigy was built more on hate for the enemy than on love of any kind.

A similar fate befell on the portraits of other famous and respectable matrons of the nineteenth-century’s patriotic altar: hieratic expressions, frowns, pursed lips. Such rigid perfection that it becomes alien and distant. Accordingly, they have been stored in our memories, but not in our hearts.

Tula, on the other hand, transcended through her human essence which ran over in her literary work and in her disobedient character which defied the conventions of her time. An intense, passionate and creative life was her personal crusade, breaking gender taboos. A single mom, passionate lover, free spirit and controversial, her tempestuous character shows through even after the majestic serenity of her portraits. She never felt sufficiently loved by those she loved — although she outperformed all — never understood by her contemporaries, she was respected and feared at the same time, and often condemned by the moral values of her time, but she prevailed over adversity and was a successful woman in a world where success was an eminently masculine scepter.

Her talent as a poet, novelist and playwright was the liberating gift of femininity sentenced to containment and censorship for women of her time. That was her way of transcending and rebelling, so her legacy goes beyond the narrow confines of her Nation and of a time, and she is remembered with pleasure and nearness. Tula was (is) beautifully imperfect, therefore credible.

Now, two hundred years after her birth, few Cubans know of her life and her work, but her house in Camagüey has been officially declared a National Monument. I don’t know whether, had she ever imagined it, Tula might feel satisfaction over such a late tribute as part of her city’s half-millennium celebration. Knowing her personal genius, I suspect that when she died she knew that she had constructed her own monument with the flair of her pen and the fiber of her peculiar nature.

Either way, I appreciate the opportunity that has led me to write this poor tribute to La Peregrina, my old and eternal spiritual friend, who scored, with her strength of character and the grace of her verse, the young soul of this fan who’s already traveling through the twenty-first century and, with much less talent but with equal passion, disobeys other taboos in the Cuba of today.