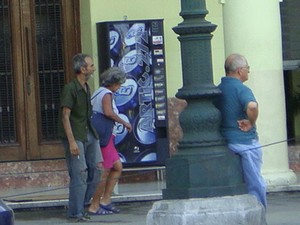 The figures are disturbing. For over 30 years the Cuban women, on average, have less than one daughter by the end of their reproductive years.An aging population without any replacements.And it is only decreasing. BecauseCuba has begun to subtract inhabitants in absolute terms.

This conclusion came as a report from the National Bureau of Statistics in 2011. Add the ages of the three strongmen of the country, both Castros and Machado Ventura, and it totals 249 years. To add more drama to the aging population, annually more than 20,000 people aged between 10 and 45 years emigrate from Cuba.

One solution the Cuban government has come up with to fight the high ages and shrinking size of the population is to raise the retirement age for women and men to 60 and 65 years respectively.

We also have the grave problem of the living quarters. Some 62% of the houses on the island are in either regular or bad state of repair. Three or four different generations have to live under the same roof.

When space is needed in the living quarters, the displaced are usually the elderly. The best option is for the grandparents to have to sleep with the grandchildren. The worst is that the family decides to put them in some run down State asylum.

There’s no worse lead up to death for an old person than to live in a State hospice. Badly treated, lack of hygiene and poor food. Already last year, more people died in Cuba than were born.

Obviously the haphazard and weak economy is not prepared to guarantee a decent life for the two million people over 60.

Today the group of Cubans older than 60 is 17.8%. It is more than the number of children ages 0 to 14 which is 17.3%. The ideal would be to promote policies to motivate women to have two or more children.

In Europe, the benefactor state usually pays a stipend to mothers with children. But the public coffers in Cuba are just about empty.

Since General Castro inherited power from his brother, the construction and social and leisure facilities for the population has dropped to almost zero. They only invest in projects that return hard currency, like tourism, or strategic projects such as petrochemicals or the transfer of water to the eastern region.

Therefore, one should not expect that at a meeting of the monotone National Parliament they will announce a cash incentive to encourage women to have more than one child. The accelerated aging in Cuba is a phenomenon that will have to be dealt with by a future government. By 2025 the Castro brothers will rest in a mausoleum or be two infirm elderly nearing the century mark.

The next president, in addition to aspiring to spectacular economic growth, will have to try to renegotiate the foreign debt and try to design a coherent society, inclusive and democratic.

All this work should be undertaken with an aging human capital. And the growing segment of women, professional or otherwise, who due to material scarcities put off forming a family.

To convince them that Cuba needs rejuvenation and more daughters would be a commendable task. We’ll see whether in ten years leaving for Florida continues to be the personal quest of many Cubans. Hopefully not.