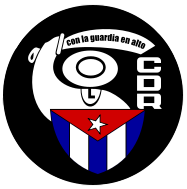 This September 28 they celebrated the fifty-second anniversary of the creation of the Committees for the Defense of the Revolution(CDR). In contrast to years past I did not see reports on Cuban television of two or three previously planned nighttime parties,”which customarily are celebrated on the 27thin “anticipation of the big day.” Normally, the national media “casually” attends these festivities in order to have broadcast images of CDR enthusiasm for the event. Instead, there was only one news report and it dealt with a daytime event in which the president of one committee spoke. His audience was a small group of passive and silent participants. There was not the usual interview with an ordinary member, who was “emotional and aroused” by theanniversary.

With the passage of years and the “permanent special period,” to which we Cubans living in this archipelago have been subjected, the festivities that were sponsored by these organizations have been replaced in the city by “a people’s cookout” featuring on an open-air caldosa* on each cuadra – the lineal space between the two corners of a block – and cheap rum for those who like alcohol. On the street where I live,in a cauldron blackened by poverty and evocative of the countryside,there was a pig’s head and two or three kinds of vegetables covered by a lot of water, all placed in the planting area in front of the house of my neighborhood’s CDR president. This time no music was heard during the very few and boring activities that took place, and the mood seemed to be more one of mourning than celebration.

This farcical institution — managed and founded decades ago to send a message of “consensus,” of a revolutionary honeymoon and a happy marriage between the citizenry and the authorities — is out of date. Almost no one expects anything positive from this organization, which has only offered interference in personal lives, surveillance, betrayal, nighttime security patrols — we never found out if they were acting in the role of police or of decoys — a lot of meetings, voluntary work brigades, rallies, marches and permanent blackmail through the use of negative reports if you did not actively participate in the tasks assigned by the organization.

After returning from a fact-finding tour of my neighborhood, I could see from my balcony the depressing sight of the few people willing to be served the “substantial” brew. They carried jugs, metal pitchers and other containers, gathering around the cauldron and, on command from a group of political warlocks with no future, conspire to annually expose their misfortunes.

*Translator’s note:Caldosais traditionally a thick broth or stew.After the Cuban revolution cooking it became a communal event in which neighbors brought whatever ingredients they had at hand. Some say this came about because of food scarcity; others believe that the change had more to do with the collective emphasis of socialism. (Source: cubaentuscon.blogspot.com)