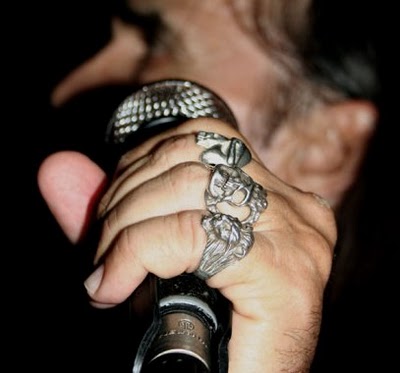 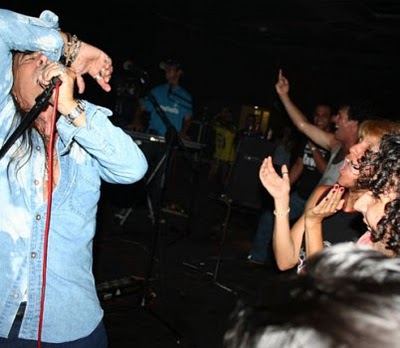 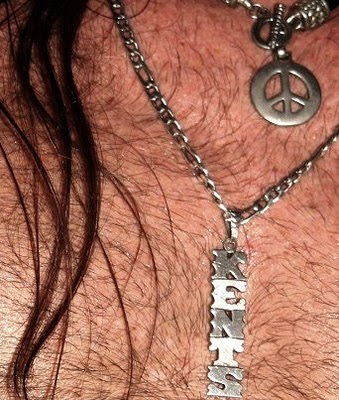 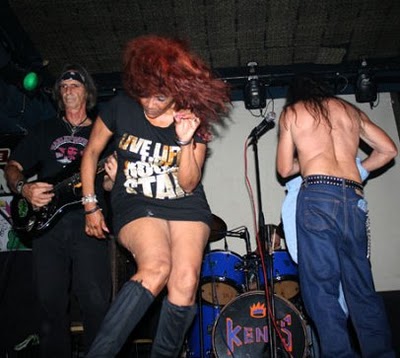 I KENT GET NO SATISFACTION

Sunday after Sunday the Kent dinosaurs occupy the stage of the National Theater, on one side of the deserted Plaza of the Revolution, in the already classic Cafe Cantante.

Thirty Cuban pesos a person. The place is cheap. It’s dark and air-conditioned: two more reasons than required to relapse, since it’s not easy to find a place to hide in Cuba, not even for a couple of hours.

So here we are, compelled by the sparse reality of another tedious afternoon in the country. We went and bought beer in hard currency. Glugglugglug yeast and hi’s and hugs and kisses on the lips at the first opportunity. We all dig you very much babe… and we paste our brains to the speakers until our memories go plfff and so we are no longer surviving in this lapsed Cuba of the zero years, we’re no longer emptying out the post-two-thousand-nada riffraff, but we are also dinosaurs of this twentieth century nailed like a psychedelic chord in our hearts.

It’s a miracle that these fifties still have so much energy. They move the atmosphere in an imitation of the aces of the sixties and seventies and a little but more. But even there we hear the drunken chatter of that sacred language, English. From the nineties to today we’re not interested in heavy metal or even alternative. Sundays are spent with the music of rock. Ladies and gentlemen, freakies of every stripe and pattern and social class: the time machine is a musical discovery of our resurrected Revolution. And, for the first time in the world socialist system: it works…! Fuck!

The fauna dance like crazy. Everyone alternating between the areíto — the sweet dances of our native non-forbears — and arockarito. Everyone flirts with everyone within the limits of the sub-hippangos of our materialist machismo. We are not but we pretend to be a commune. Sometimes and ephemeral bureaucrat usurps the Kents’ microphone and shrieks – ridiculous, laughable: the civil official gives life to the Young Communist Union and other organizations la Peña supports or allows: pushing on us the idea that without the institution a space such as this would be impossible; finally quoting a cultural slogan in the name of the Premier or his Rockvolution.

We don’t know or care about your Marxistoid rant. We don’t hear, we don’t spit. We leave him under the state because at the end of the day he earns his salary, and it’s obvious that the poor thing doesn’t even know the taste of what he utters. He must be a businessman who traffics in rum or something metabolically more beautiful and exciting. A hypocrite who takes advantage of each historical context. A nothing of the masses. In any case, this man is nuts. (Good) luck that we’re nodding and looking for a pair of sad eyes to fall in love with for the umpteenth time. Behind blue eyes.

There are the perennial little characters halfway between pathetic and pathological. The one who imitates Michael Jackson. The one who imitates one (or all three ) of the Bee Gees. And the fingernails that are neither Oz nor Ozzy, but rather the wizard Mogly who is an imitation of Tina Turner, drinking a little rough and unfortunately crowing that she is the owner of la Peña de los Kents, who no one can touch on the dance floor or in the delirium, who calls for security with a Cuban oath. And to top that, the call of truth, and the chubby goonies appear, each with their security school diploma and everything is fucked. Peace, Love and Freedom and will go out with the recycled paper in the toilet where many go to kill the desire for anything.

October 24, 2010. It’s not the first time these guys behave like what they are. Gory gorillas. I’ve seen them push people around on the stage. They have to justify their muscles and don’t understand. The Kents keep on playing as if nothing happened. The Kents don’t understand either. It seems they want to preserve their little piece of Cuba at any cost, a lot of work that costs them the contract, when none among them would defend the State, among other etceteras justifying the island lack of solidarity.

They pull them outside. And Tina Turner denounces them without proof. Or persuades them they have to talk (so typical of our organs of state security, the converse with you to convert you). And outside there they inform the young people they’re expelled from the jangling Cafe.

It all crashes down like a speeded-up tragedy. The bulky-non-identified are Counterintelligence (a word that always hits me as the opposite of intelligence, as the brute barbarism in this case beardless). You can tell them by their ridiculous haircuts and their rayon shirts. Following the confrontation with the guys and the girls taking the most uncivil initiative (they’re the Senoritas in White): assaulting the microphones to denounce the arbitrary expulsion, for the rest, lying.

Of course they turn off the audio and push them. Then get entangled in the cable and later say they were the ones who broke it. The Kents almost applaud. The guitarist, Dagoberto Pedraja, remembers the mother of a girl three decades younger than him, who didn’t know he know her but is very touched, because yeah, they know each other well before. Other Kents argue that the shit pulled by their fans has nothing to do with them, that’s what always happens with capitalism and go ahead, get them out of there, they asked for it. What began as the despotic disparagement of the Cuban false Tina turner, is now a marathon of bullying in the time of the Kents. The victims are guilty of inconveniencing their attackers. In reality, Cuba digs though never its own grave.

Some unknown takes out the American flag filled with enthusiasm for a great American band and we all tremble then to keep time with an American Band. It’s chaos. It’s too much. They call a patrol call. Point the finger of accusations. Those expelled in the first round are joined by those with the flag. The basement has me trapped. A cry remembers that Lucius Walker was also an American, and the yuma flag itself should not constitute a sin. The thing smells of politics. The police start their ritual: handcuffing and heading off to the Station at Zapata and C.

Left behind is the peanut gallery. They put on recorded music. The Kents are massively pissed off but they don’t have the balls to carry on, heads bowed to the Administration in the form of MININT. None of the public protest too much. Another shout that hopefully Human Rights will be heard (I heard but I am not Human Rights).

I know the guy handcuffed and walk behind the patrol car, but when I get there the cheeky lightbulb-saving receptionist comes on like the usual bitch (now, in the light of day, I could revise the text but she was, in effect, a bitch, and I could pull out my ID card or get the hell out of there). After-the-fact question: Why are the cops so ugly? Is it the bad lighting that makes them look cadaverous?

The truth is, ignoring the condition of the agent of public order, the officer lies to me almost with love. They haven’t arrived. They aren’t here. I go out to the Geely at top speed. I have to wait. (Wait for what if they aren’t here?) They will come soon! Pinocchio-Cape-Boy glares at me and I cross Zapata street and call the bloggers on the phone and think about twittering, as if I can disburden myself of the fact that my friend seems to have disappeared.

But that’s it. In a bit my friend appears in the lobby at the station at Zapata and C, around the time they shoot off the canon. Yes! he was there! Wanting to sue the receptionist for Non-Acceptability or perjury. They passed his ID info over the radio and he came back clean, no record (and if he’d been dirty, then what? How many times in Cuba can they make you pay for the same crime? Or is blackmail perpetual?).

We get out of there fast. I can feel the paranoia and don’t want any more of it. It was nothing. Not even a fine. A mistake: the horror always is. At least they didn’t shoot us dead in a ditch, which the Minister could justify now as a Music example.

I don’t accuse the Kents, I excise them. They are left with their poor Peña and the threats of his henchmen who aren’t going to let us come any more (you’ve got to see this, compay! Look at the oven that’s not for more prisoners). We leave them there with their complicit Made in Kentucky covers. Eating their Cafe Cantante excuse Sunday after Sunday, at one side of the deserted Plaza of the Revolution.

Of course this is not a call for a boycott. To the contrary, they are more than welcome. To charge your face when you come in but not to kick your ass on the way out. To be or not to be: that is the Kentsion!