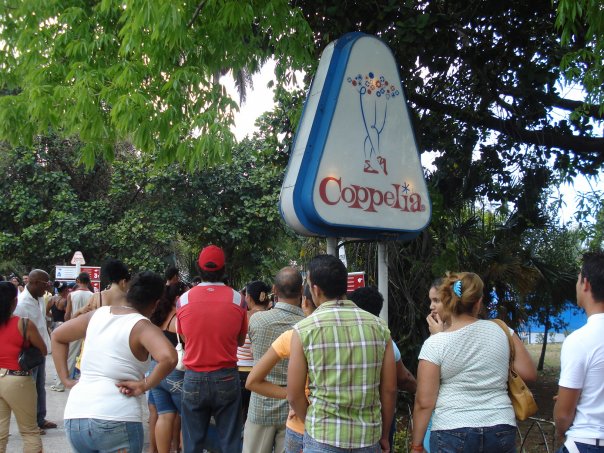 Coppelia, the most famous ice-cream parlor in Havana and in Cuba, turned 45 on June 4. Located on the corner of Calle 23 at L on the central avenue La Rampa, its architecture is one of the most beautiful and best-designed since the olive-green revolution led by Fidel Castro.

The design, by Mario Girona (1924-2008), one of the most important Cuban architects of the 20th century, was done with the collaboration of planners Rita Maria Grau and Candelario Ajuria. The structural calculation was carried out by engineers Maximiliano Isoba and Gonzalo Paz.

Girona formerly completed a successful project baptized with the indigenous name Guamá, established in 1962 in the Zapata Swamp, Bay of Pigs, Matanzas, about 140 kilometers southeast of the capital. Those 10 wooden huts in a circular motion in the manner of a Taino village (aboriginal), on the edge of a lagoon infested with crocodiles, remain one of the favorite places for tourists.

When they entrusted Mario Girona to design the gigantic ice-cream parlor, he was somewhat taken aback. In an interview done a few years ago, he emphasized, “There were no global benchmarks for such an immense ice-cream parlor.” In record time, the architect Girona and his team drew the rough sketch of Coppelia, strongly influenced by the style of the tourist complex of the Zapata Swamp. In this respect he stated: “Guamá was the starting point for the new work. To give some privacy, we designed five small spaces, a large court divided into three sections and a floor on top. We provided ample parking and lush natural vegetation, which would not intrude.”

The hospital Reina Mercedes, built in 1886, formerly was situated on this spot. The land had cost 3,000 pesos. When it was demolished in 1954, the land was worth 250,000 pesos. The idea was to erect a 50-story skyscraper, even taller than the Focsa, the tallest building on the island, with 36 floors.

But the project didn’t materialize because of the arrival of the bearded ones. Before, a recreation center called “Nocturnal” and a tourist pavilion had functioned in the ample space. In 1966, during the celebration of an international congress in the Hotel Habana Libre, situated on the opposite corner, Fidel Castro, a great lover of ice cream, decided to erect Coppelia, whose name and image – the legs of a ballerina – pay homage to one of the great performances of the National Ballet of Cuba.

When, on June 4, 1966, the Coppelia ice-cream parlor opened, it offered a menu with 26 flavors and 24 combinations. A scoop of coconut with almonds or cream cost 50 cents, a Copa Melba (vanilla ice cream with a slice of mango, strawberry syrup and marshmallow), one peso. That day they sold more than 3,000 tubs of ice cream, and during the 12 hours it was open, the line was several blocks long.

Ice cream is one of the favorite treats for Cubans of all ages and eras. The first ice-cream shop was installed in 1807. Due to a climate that averages around 30 degrees (Celsius) annually, people like to cool off with ice cream, alone or with cake, cookies and syrup. Or a milk-shake with ice.

Before the comandante took power, there were several prestigious brands of ice cream in Havana: Hatuey, Guarina, San Bernardo and El Gallito. They were sold in ice-cream parlors and cafes or in vehicles located in crowded spots in the city. “I preferred waiting for the seller ringing a bell in a cart with wheels or pulled by horses. For a peseta (20 cents) you could buy an iced coconut,” remembers Humberto, a retired man of 82 years.

Those ice creams, produced with milk in factories, competed with the artisanal fruit ones, produced by the Chinese without milk. According to Josephine, a housewife, 70, “I have never tasted ice cream as rich as the ones made by the Chinese.”

After Castro they continued to make good ice cream. The Coppelia brand was sold in the ice-cream parlor of the same name. It was very creamy and came in 20 different flavors.

With the arrival of the “Special Period,” an economic crisis that has lasted 22 years, ice cream became a luxury. And its quality diminished tremendously. In those hard years, the ice-cream parlor was open two hours a day. There were only two or three flavors, and because of a lack of milk, the ice cream was watery and tasteless.

Ice-cream resellers bought tubs of ice cream from Coppelia. And in their homes or the vicinity of hospitals and playgrounds, they sold a plastic cup of ice cream for 10 pesos. This was one of the many illegal business that existed in Havana.

With the legalization of the dollar, imported ice cream with the brand-names Word or Nestlé arrived. One Nestlé Extreme was worth 2.50 cuc (3 dollars), the 4-day salary of a worker. For hard currency you could also buy first-rate Cuban brands, like Flamingo.

Forty-five years after its opening, the ice-cream parlor Coppelia is only the shadow of its former self. Sunday, May 22, there were only three flavors: vanilla, orange-pineapple and mint. Although ice cream is not expensive, at one peso a scoop (5 cents), its quality leaves much to be desired. Of course, the long lines continue. Once, going to the “Cathedral of Ice Cream” constituted the main week-end outing for many Havana families.

Today, weary travelers, students, workers, prostitutes, pingueros, gays, transvestites and lesbians, among others swarming around the clock by the central ice-cream parlor, form a line by sheer force of habit. There are almost never the flavors you want. Like almond or moscatel. Strawberry or chocolate. 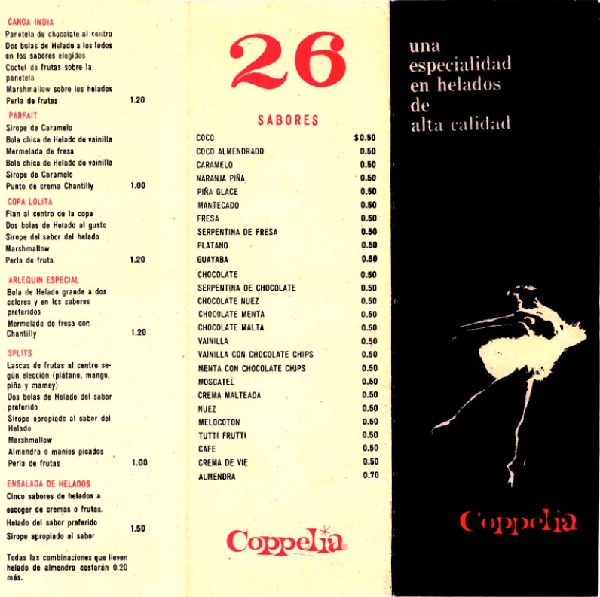