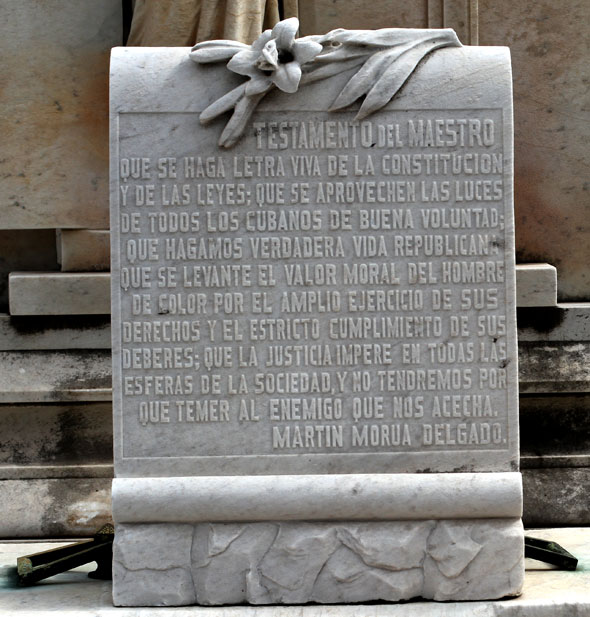 My neighbor Elisa says she is convinced that the Revolution is immutable. One reason is because of the number of youth who are in the Revolutionary Armed Forces — doing their military service — who, according to her, would give their lives before “handing over the country.” I hastened to tell her, perhaps reassuringly, that the sovereignty of Cuba has never been in danger.

I put to her the example of the Venezuelans, who have taken the long view to not to give absolute political power to the leader there. Then, in the next elections, the country will not surrender, God willing, when they vote for the opposition candidate, if that is what they want. It is a question of “Elections,” to which still they are entitled.

We no longer have the right to choose. Every time the seals applauded “Elections? What for.” And now those of us who are not supporters of the policies of my neighbor Elisa’s Party, have no one to choose from. Of course, the also doesn’t know that the Army of a country should never represent a Party, because a Party represents only one faction of Society.

We no longer have the right to choose. Every time the seals applauded “Elections? What for.” And now those of us who are not supporters of the policies of my neighbor Elisa’s Party, have no one to choose from. Of course, the also doesn’t know that the Army of a country should never represent a Party, because a Party represents only one faction of Society.

The main damage this process causes in people is the bigotry and ignorance of having sown the ideology of a single author. The worship of the leader excites the mob to violence against any manifestation of the opposition. The mobs themselves are organized and even transported to the homes of the opposition who protest only with their voices. Something as arbitrary as a leader and an exclusionary State can not bear these voices because they fear them and so try to crush them. These voices that have burned their ships rarely give up.

There is no return after believing in the human right to freedom. All these phenomena of the State trying to discredit the opposition have been practiced by other totalitarians before this one. All these totalitarians have fallen when human beings preserver for their freedom. Only God knows the keys to our Destiny.

Most disconcerting is that my neighbor Elisa thinks that the violence is justified and that the Ministry she works for is doing the right thing, seems a human being. She had always seen it as such, once I dyed her hair because she did me a favor. How treacherous our condition can be, she represents the power that crushes us with no respect, that has deprived us of our rights.

I knew she was wearing a uniform, but we also talked on other occasions, about family issues. The worst thing is to discover that we can sympathize with our enemies. I don’t call those who think differently enemies, but those who exert direct or covert violence against other Cubans.

Also, she reminded me of someone whose name I don’t remember, to defend her thesis of the importance of defending sovereignty against democracy (which is the most bizarre reasoning, like an autoimmune disease) she asked me to show her the opposition documents that weren’t testimonies. Documents versus testimonies, this is a film I’ve seen before, I think that this is something of the devil, not just human powers.
If the opposition in Cuban had the space that rightfully belongs to the, if they could visit the Cuban prisons, denounce the abuses with documentary images and not only with the value of a witness that only a totalitarian policeman would dare to underestimate. She also has told me that it is “the people” themselves alone who organize the pograms or acts of repudiation, without the intervention of the Ministry of the Interior. National Socialism in Hitler’s Germany also used supposed civilians to attack the Jews before their violence was unmasked.

Since the end of the USSR, the Castro government of the Island of Cuba has not been able to completely ignore international condemnation, so I was alarmed that they could strengthen themselves with Venezuela, Iran, Syria like in the times of the Cold War, because, like Hitler did after the Non-Aggression Pact with the Soviets, they constructed extermination camps against human beings, who would be annihilated by the “New Man,” the Aryan ideology, without weaknesses. Didn’t they do it before with the UMAP (Military Units to Aid Production — Cuba’s internal concentration camps)?

In democracies they lack the weapons to fight dictatorships, because the dictatorships, formed by weak beings, compensate with a terrible decision. If there are documentary images of the pograms, it doesn’t matter if they’re disguised as civilians, or try to be, State Security uses other civilians with whom they maintain constant communication to make it appear, before the world, that it is not the State facing off against civilians.

The fanaticism shown my the mobs, the loudspeakers, the buses that brought them, and the permit that at some point the mob has been given to unleash their violence, by those supposedly responsible for public order, the use of batons and tear gas, arresting people if they give in to the temptation to resist not only passively, and to return some of the punches, reveal that the policy is ordered from the highest levels to not yield one iota of their insecure position in the face of genuine popular aspirations.

So they cannot accept human beings as they are and need to convert them ideologies. It is not patriotism that swells the throat of my neighbor, but the tacit complicity with a dictatorship that is among the worst and most treacherous ever seen on earth.

There is a video of the invasion of the Leon Fonseca family home carried out by the mercenaries of the State. The family of Sara Marta Fonseca represents the voice of Cubans whom they have thrown into the cauldron of totalitarian violence.

Totalitarian regimes have pretended to stand as advocates for the poor because they need to confuse the masses, it is a complex mechanism.

When a society falls into it is difficult to escape, but not impossible. Once I said, quoting a prayer of Lezama’s: It’s true because it is impossible, the impossible generating infinite possibility, but there is much risk on the road.

Not everyone has faith to take such risks, like the family of Sara Marta Fonseca. God protect us.