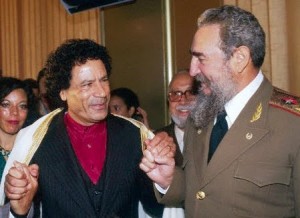 “What’s happening with Cuba, when will they rise up?” a friend from Spain asked me, as she eagerly follows the events that have shaken undemocratic regimes in North Africa. I reply that in our island disturbances can occur, but the government still retains the ability to govern as the opposition is weak and most of the population sleeps in fear, indoctrination and indifference.

According to my friend, thousands of people around the world “await the awakening of the Cubans.” I warn her how risky it is to predict insurgencies within different contexts, but she emphasizes possible comparisons and asks me “to compare the tyrants.” I limit myself to “comparing” the Libyan autocrat his Caribbean counterpart.

It is true, in less than two months riots happened from Tunisia to Yemen, from Egypt to Lebanon. Some despots boarded a plane. It remains to be seen what the Libyan Colonel Muammar Gaddafi will do. In power since 1969, he blames foreign television channels that are “working for the devil,” as if he were God. “I’m not leaving in this situation. I will die as a martyr.”

As the Libyan leader will not follow in the footsteps of Ben Ali and Mubarak, he ordered th protesters to be deterred with helicopters and fighter bombers, while hiring mercenaries and denigrating “the dogs that deliver drugs and money and distort reality.”

“I am not a president, I am the leader of the revolution” warned Gaddafi, as if such leadership turns him into a vital monarch and immunizes him against the changes demanded by the crowds who claim their rights and freedoms in ancient Phoenicia.

Colonel Qaddafi, like comandante Castro in Cuba, justifies its hold on power by blaming all the problems of his country in imperialism. Both are allied to the former Soviet Union and survived its debacle. They go so far as to appoint their heirs: Fidel Castro appointed his brother Raul in mid 2006, while Gaddafi chose his son Saif Islam, who is now trying to appease the opposition.

Gaddafi is as eccentric as his tropical counterpart, but he is pragmatic and has oil. The first came to the throne in 1959, shooting thousands of people, dismantling the Cuban economy and society, arming guerrillas in Latin America and intervening in military conflicts in Africa. The second wanted to become the scourge of Europe and the United States, supported the guerrilla movements who raised the Koran against the West and promoted terrorism by Bin Laden.

The Libyan despot dynamited discos in Berlin dynamited and brought down airplanes in flight. The Cuban tyrant committed similar atrocities, supporting by totalitarian regimes and promoting the mass exodus of the population. Both criminalize political dissent and violate the human rights of their peoples.

The popular uprising in Libya intends to shake up the medieval state restored by Gaddafi in 1969. Opponents want to build a modern, democratic state that promotes freedoms and rights. So far, Gaddafi prefers to “burn it the ground rather than surrender.” The death struggle is being waged in cities across the country.

In Cuba, Castro retains governance, but the powder keg can explode at any moment, but increased unemployment and rising prices of commodities suppress expressions of freedom, as a national despair spreads. The majority sleeps on, focused on survival and indolence, but in this island the carousel of history has always been driven by a bold and enlightened minority; this minority exists. Hopefully it will seize the moment.