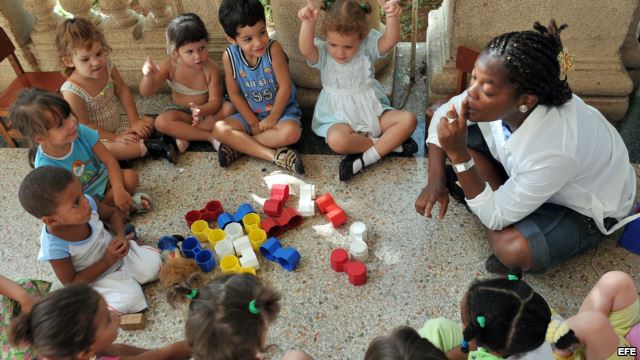 The possibility of getting a place for a child in a childcare center in Cuba has become a real search for the impossible. The small capacity in these nurseries, the bad food, and the reduction in the requirements of admission for women who work in the ministries of Public Health and Education make many see that goal as a chimera.

The childcare centers and kindergartens were implemented at the beginning of the ’60s, so that Cuban parents could work without worrying about the care of their kids. But in the last years, these educative centers have been converted into something exclusive, above all in some interior regions of the country where approximately one exists in each municipality.

Without the syndicate’s recommendation, the support of the Federation of Cuban Women and other sources that have leverage, it’s impossible to obtain a space in these places.

Mildred Sánchez, a nurse who resides in the coastal municipality of Antilla, in Holguín Province, could never put her kids in a childcare center since she had not graduated.

“The solution now are the girls who haven’t gone to university and don’t have work, so they take care of children,” says Mildred.

These youngsters “take care of children less than one year because the mothers have to work, and they go with them and take care of the babies. Here on my block live two 16-year-old girls who are taking care of babies, one has three babies in her house and the other has four,” she affirms.

The alternative of private nurseries first passed by the rigor of state inspectors,

who fined those who ran them, until the last attempts at reform included them as a mode of “self-employment.”

In the capital, an employee of these nurseries can earn a salary of almost 40 CUC a month, and, in addition, they are guaranteed a free lunch.

In Antilla, where Mildred lives, there is a childcare center, divided into two parts, “one in front of the other. They are the private homes of people who have emigrated from the country,” Mrs. Mildred Sánchez concludes.

Yanisleidis Rodríguez, a mother in Havana, is a worker and a dissident at the same time. She has a black mark against her, and it would be impossible for her to get a place in a childcare center. “Before being in this (she is referring to the opposition), I didn’t have the right, and now I have even less,” she remarked. She has two children, one who is 7 and another who is 4.

“To think that I worked in Provincial Education and even so they wouldn’t give me a place for my children. There with me were mothers who spent many years working in Education and had to pay a person to take care of a child so they could work,” she indicated.

Corruption has penetrated this sector, as Yanisleidis recounts, who asserts that mainly being a director or having a good recommendation makes it possible to obtain the precious placement for a child in these places.

The concern over enrollment for the children of Yuliet Pérez, a resident in Pinar del Río and an ex-worker at the Provincial Hospital Abel Santamaria, came up against a concrete wall.

“When I had my first girl I asked and never got a reply,” she says, and she adds that neither were there careers for educators in childcare centers, which also affected the availability of these services.

From Havana, the independent journalist Álvaro Yero Felipe denounced on the Digital Spring website that “six workers in a childcare center in the Arroyo Naranjo municipality sent a letter to the National Director of the Ministry of Education in Havana, where they accused the administration of the center of diverting food and economic resources and materials meant for the children,” said the publication.

Yero reported that the incident took place in the Luxil childcare center, located in Arroyo Naranjo, and the letter related the diversion of “resources that the government received from foreign humanitarian organizations for the children who are boarding there, under state authority because they don’t have families.”

The children are under state custody, and their principal support is the agency of security and protection, SEPSA, and they are not older than five years of age.