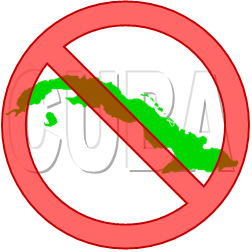 Censorship, among other things, is a moral scourge, one of the tools totalitarianism uses with devastating impact on the self-esteem of those targeted. Its practice not only should be abolished, but banned throughout the world. Thus, dictatorships are erected and sustain themselves, carving on the societies where they are in place what some call their different faces, costumes, reflections, and masks.

Totalitarian and authoritarian systems of government are the potters of this disease, and the strongmen or Caesars — ancient or modern — who introduce such arbitrary lawlessness are its sculptors. But it is to the mutant face of the censor that I am speaking of: self-censorship. It is, definitely, the same face, but with a different mask: the denigrating and simulating of the most ignominious self-muting of the metamorphosis.

In Cuba after 1959 is found the ideal substrate to enthrone it, and its crown of mud washes down over the face of democracy to the shame of the world’s democrats and Cuban society, which wants to join the free nations of the world and incorporate, adopt and internalize democratic values of justice and equality.

We don’t understand when Cuba’s leaders talk of fighting censorship and ask that be begin to eradicate self-censorship from the social fabric. This signal-suggestions infers a criticism, and this phenomenon is so deeply rooted, and logically embedded, complex, that I think the best way to combat it is to dismantle the conditions that originally gave rise to is and recognize and defend the inalienable rights of individuals in order to sow trust in society. And that would be just the beginning of a liberating process that needs time for “mental processing,” assimilation and incorporation of new patterns and paradigmatic references.

The invitation to “not censor ourselves” when they haven’t created the conditions for that to happen, seem like demagoguery to me. We all know that the authorities have almost total control over society, so any attempted to “really” combat this aberration that they established must be based on the recognition of the rights that are at the base of the entire process of personal and social liberation.

To criticize a people about exercising freedom of expression which has been penalized for decades and which has brought many of our compatriots long prison sentences until yesterday, is neither just nor realistic. Is it credible?

They accuse us, when they have totalitarian control, of the injustices they themselves have committed “because we allow them” or make us responsible when we are tied gagged and with a rope around our necks taken on foot to be lynched, and yet reproach us “because we let ourselves be taken.”

In fact, after fifty-two years in power, the authorities leave no doubt that they are the lion and people are the monkey in chains. So where does this story come from?