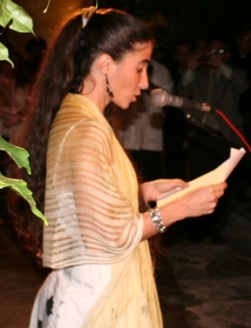 This past Friday, January 7, 2001, I had the opportunity to enjoy together with my husband an outstanding soirée. We went to the home of the ambassador of the Queen of the Netherlands, where the official presentation of the well deserved Prince Claus award was made to Yoani Sánchez. Her participating family members and friends were extremely proud of the importance of this international recognition and of the fact that it had been granted to the pioneer and most outstanding vanguard of Cuban bloggers.

In a simple but emotional ceremony, the host read some words in which he explained to those present that Prince Claus was the late husband of Princess Beatriz, the Dutch queen; and the elements that are considered to award this prize annually to different persons on the world stage. In his reading he also added the fact that her right to travel had been violated, along with that of Guillermo Fariñas (Sakharov Prize 2010 and present at this ceremony), something that unfortunately continues to be a daily practice in Cuban reality.

Yoani’s statement started by thanking the Dutch ambassador, the members of the Prince Claus Foundation, those present, including the readers, commentators and translators of her blog — something that defines her in its simplicity. She also shared with us her plans for the immediate future and invited everyone to accompany her to be part of the same, distinguishing the importance of maintaining the differences that “feed our plurality and avoid the recognized error of unanimity.”

* The photo which accompanies the present work was by courtesy of Reinaldo Escobar, Yoani’s husband.