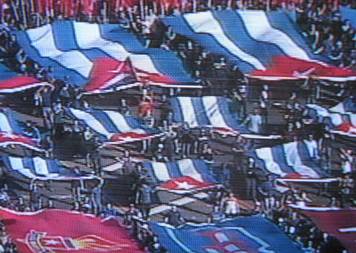 In Havana, traditionally, carnival is celebrated in the second half of February. Later they changed the date, and it has practically disappeared. However, the first of May, which was a day when workers presented their demands and requirements to the current government, for years now has become a complete carnival.

Yesterday was this year’s event. Well organized and controlled (the efficiency, unknown in other fields, is remarkable here), it took place exactly as planned: the participants were gathered at the times and places established, taken from there via the planned routes and deposited in their places, from there they formed up ranks, and they all marched, happy and combative, the placards, the banners and the allegorical objects reflected nothing incorrect (they repeated praise for the socialist model, criticisms of the empire, without forgetting to demand the release of the Cuban Five), the speech was more of the same, and, like always, the guests were friends of the government, composed principally of old and young representatives of the nostalgic international left (some 1,900 according to official figures), who once a year get to be tourists for free.

The celebration of the workers developed a rhythm of hymns, complacent chants, Cuban flags, ranks of the red, it couldn’t be any other way! They sang the Internationale in unison, with one fist held high. The return of the participants to their places of origin was realized in reverse, but with equal efficiency.

The number of participants was already known beforehand: that established by the organizers (some 500,000), with each union assigned obligatory numbers, broken down between workplaces and schools. In short, the unions here, as happened in the extinct socialist block, are governmental and don’t represent the interests of the workers, but rather those of the State.

So it happens that their leaders, who do not come from the ranks of labor, are designated officials who are put in their posts, and removed from them, according to the political expediency of the moment.

One interesting detail was the participation, for the first time, of the self-employed, organized within the unions according to their activities. It seems that if they want to keep their licenses and survive without major setbacks, they have to join the carnival.

I remember that in the former Soviet Union, workers marched combative, happy and smiling for their great successes in front of their rulers, in the morning, and in the afternoon, in the privacy of their homes, with family and friends, they drowned their sorrows and frustrations in vodka. I do not want to believe that the same thing is happening here!