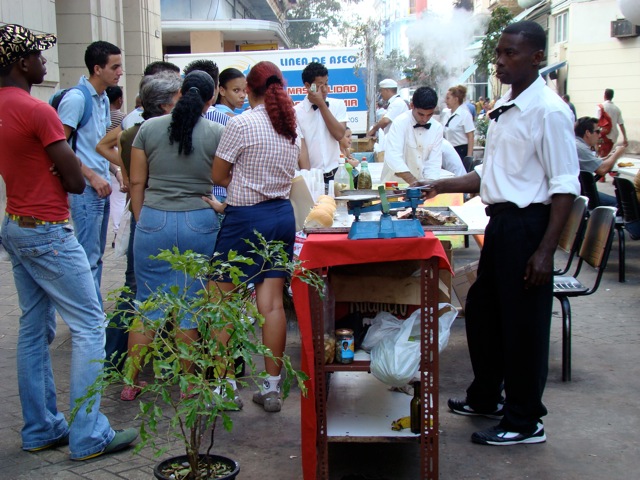 A white-skinned off-duty law enforcement officer, having a drink, justifies the Cuban police force’s racist archetype that turns a black or mixed-raced person into a presumed criminal with the old refrain he learned from his mother, “All blacks are not thieves but all thieves are black.”

The guy is not a bad person. He’s a good father, a competent policeman, and doesn’t consider himself a racist. But it was what he learned in his childhood. Racial prejudice abounds in Cuban families. Then moves into the whole society.

The Havana agent’s attitude informs the National Revolutionary Police in the days of operations and raids: of 10 citizens whom they stop in the street and ask for identification, eight are black. It is a problem of mentality.

A couple of years, a friend who worked in a foreign firm, told me that he was thinking of selling bleaching creams for the skin. I didn’t believe him. According to market research, he said, the cream would have wide acceptance among Cubans.

As I’d never seen them for sale in hard currency stores, I thought it was a hoax. In the book Afro-Cubans, historian and anthropologist Maria I. Faguagua related that in 2009 a Spanish company considered this possibility.

Several respondents, who work providing hair treatments for black women, said that these creams would sell like hotcakes. “You can think what you want. But I’ve spent 20 years straightening hair and I say that many blacks and mestizos would give anything for light skin and becoming white,” said a Havana hairdresser.

Certainly black pride in Cuba is not at its best. What blacks have gone through is a lot. It’s always good to look at history.

Since 1886, when slavery was officially abolished, blacks were left at a distinct disadvantage compared to whites. They had no property. No money. Or ancestry. And much less social recognition.

Years later, during the Republic, their decisive contribution to the struggle for independence was barely recognized. Despite these efforts, they could only get jobs as dock workers, cane cutters, or in construction.

Many black families did not quietly accept the fate of living as lower class. And some were able to climb the steep and difficult social ladder.

But they were the few. Then, as we know, Fidel Castro arrived. He decided to solve the racial differences by decrees and camps where blacks and whites mixed and became “partners”.

At the beginning it wasn’t bad. But racial prejudice in Cuba was more subtle. It was — and is — deeply entrenched in the minds of the majority. And that can not be legislated. If they really wanted to break down barriers, they needed systematic educational work over the long term, and inclusion of blacks and mulattos in power structures.

That was more difficult. It was one thing that the personal bodyguards or soldiers sent to the civil war in Angola were the color of oil, and another, for them to form a part of the status quo.

Although after 1959 blacks won spaces, and they shared with whites the carnivals, ball games, attendance at the best schools and college, then, despite all their talent, they were stuck in the mediocre group of professionals who retire without being able to scale the social or political ranks.

From time to time a black person shows up at the higher levels of the government or the Party. It’s a question of image. But blacks continue to be on the lowest rung of society.
They are, of course, the majority in prisons and in sports. Except for chess and swimming: according to old racist concepts in these areas brown people are failures.

But when they are seeking access to Alicia Alonso’s ballet company, they are regarded with suspicion. Almost apologizing, an old teacher told me: “I have nothing against blacks, but for the ballet they have anatomy problems.” (He ignored the victories in the London Ballet of Carlos Acosta, a Cuban black dancer.)

If they are active in music and sports, they are also known for getting into prostitution. Looking for something different, or because of the myth that they are good in bed, many Europeans travel to Cuba to be sexually satiated with dark skin. Cheap pleasure.

But while the prostitutes offer themselves in the clubs and nightspots of Havana for $20, some black men still look for their future in the distance, especially in Europe.

Thus, the worst of the worst in Cuba today is a woman who is both black and dissident. Ask community activist Sonia Garro. A nursing graduate with stellar grades, she personally suffers racism from some of the Creole mandarins.

One afternoon, proud to be the first professional a family whose members had engaged in lower paid occupations, with her best dress and pair of shoes,  she went to the Astral theater to pick up her diploma. At the time of taking the group photo, a provincial leader asked her to leave: “Those of your color are not good in the pictures.”

Years later, Sonia told me that her anger was such that she left without picking up her diploma. Soon, she became a dissident.

A few days before the Pope’s arrival on the island in March, the anti-riot forces of the political police entered her home as if she were a terrorist.  Using rubber bullets and excessive violence, they charged with Sonia and her husband, Ramon Alejandro Muñoz, also an opponent. They await the legal process in severe prisons. She in a women’s prison, he in a punishment cell at Combinado del Este prison because he refuses to wear the prison uniform.

Blacks in Cuba seek their destiny in the few options to succeed that they have. Their failures are triple the number of successes. A high percentage live poorly and eat worse. Patience has been drying up. And they have decided to stop being prisoners of their race. Like Sonia Garro.