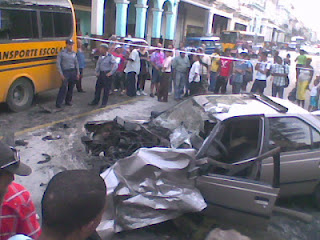 “Don’t look,” my father covered my eyes. This was invariably his reaction. This is what he did with his son Orlando Luis every time death scorched us.

I remember several terrible accidents. Manolito, black, skinny, with terrible diction and a noble heart, barely ten years old playing ball at the corner of Beales and Fonts. It was a horrendous afternoon in the eighties, the blood not erased for hours and hours, flowing along the curb, almost among the palms of my garden.

Another time by bus, across from Dolores Park, men from the telephone company climbing out of a manhole and a car ran over them, God only knows for what reason.

A girl crossing the Via Blanca, more or less at Bacuranao. The car dragged her several yards. I could smell the rubber of the brakes. They took her, unmoving. I couldn’t believe it, I still can’t believe that she died just like that, quite naturally, before my covered eyes and that mournful phrase my father’s: Don’t look …

Why didn’t he want me to look? What memory did my papá want to save me from? To postpone, perhaps, my notion of death. It was a futile attempt. Every day death haunts us more promiscuously. You will look at death with indifference … I remember a brilliant song by Polito Ibanez.

In recent weeks I saw someone fall on his head under the front tire of a P7 Bus, in the middle of a boring Sunday afternoon. More recently, I saw the sneakers of someone shot on 23rd Street at the bridge over the Almendares River. The rest of the body lay under the black nylon of the police. Blue lights flashing, cold and silent. It was late. Had they found someone to tell? For me now, there is no one to cover my eyes, either in fear or in pity.

Paradoxically, these unexpected deaths warn us, awaken us, make us wary of consensus and even of our senses, they reactivate the metabolism to take advantage of every drop of time and to not make mistakes for nothing (that symptom of apathy), it restores to us some beautiful and ephemeral sense of humanity. It is now. It is here. We live and we will defend that privilege on behalf of those who did not know.

Also, we must demand to squeeze to the maximum our existing ex-intellectuals. We can no longer drag this sensation of mental humiliation, this apathy that is killing Cuba. It would be terrible to die without knowing it in such a state of misery and meanness. Or, worse, to die knowing it and without the will to lift a finger.

I repeat, compañeros. Literally, compañeros: traveling companions. It is now. It is here. We are alive and must defend this entropic luxury that seems to violate all the laws of thermodynamics: life.

“Look,” my father should have told me. “Look early, Landy, see what can happen to us.” “Avoid this, better to know barbarity than chaos.” “Resist, survive.” “Look at how a body becomes a cadaver.” Even without an accident happening, I now say: Look at what a corpse is that still doesn’t know and continues stuttering like a Cuban body.