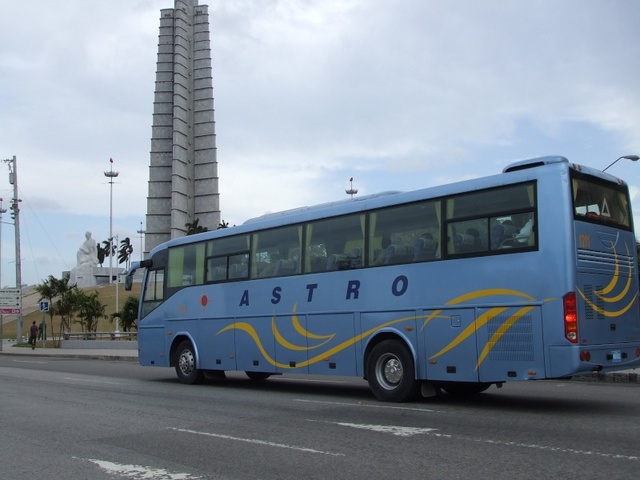 Many will think that I am referring to a method of torture made by the Chinese with the deliberate attempt to hurt, but far from that, I am speaking of the famous Yutong brand of bus made in China. Although, I am sure it was not designed to torture us, it does so with amazing efficiency, especially when the distance traveled is long. Obviously, the Chinese Yutong buses manufactured do not take into account Cuban characteristics, for if they had, the space between the seats would be greater because Cubans do not like to ride anything that crowds us especially when those around us are unknown. The seats in these buses have been the cause of more than one altercation between passengers and if someone really wanted to know what I mean by torture, one would only need travel from Villa Clara to Havana to understand, much less try a masochistic journey of more than fourteen hours from the capital to any point of the eastern part of the country.

The jokes abound among the clients of the only bus line in the nation, the ASTRO, which in spite of its name, every day loses more luster due to the fact the buses age without receiving much maintenance. The backs of the narrow seats, for example, suffer from the pockets of mesh within which to place containers of water or other possessions that we carry by hand. In many buses the curtains hang with breaks or it is impossible to close them, cording them through the clasps made for it, or riding in the hot Cuban sun, whether by day, or cold moonlight in the night passing through the windows; or you cannot see outside at all. A very bad matter for the claustrophobic. If we add the stench emerging from the bathroom added to the monotony of travel and the screens for the projection of film or music hang useless all the way. But the most uncomfortable aspect continues to be the tightness between the seats.

As I said the jokes and conjectures are many: the Chinese think that Cubans have limbs as short as theirs and we are as thin and stiff as them, that the buses were built to travel short distances, if I still carry my knee pinned in the back, that if the fat next to me almost touches the floor and the last I heard: Hey, this bus is a Chinese condemnation of torture!

During these days we were visited by friends, the anecdotes were raining down and to me, I almost used the entire tube of Bengay in the massage I gave my visitors imagining the seats located in front of the bathroom and third to the last, stiffer as it is known those don’t lean backward. If anyone has doubts about how torturing these babies are, if a foreigner will not travel the country in rented cars or on buses chartered by National ASTRO, choose instead to sit on one of the stiff (bus seats), I am certain that after that experience no one will be able give him a story of what the true reality of the life of everyday Cubans.