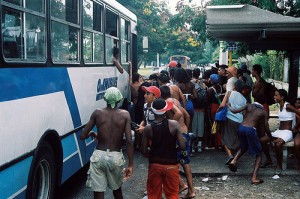 Transportation in Havana is again in a decline. It’s experiencing another crisis. Traveling inside the city limits by public bus can take two hours. If you’re lucky.

Seeing people sweating buckets under a blazing sun and trying to crowd into a small doorway of a house is really something.

It takes 40 minutes for the P-8 to come by, one of those articulated buses belonging to Metrobus, the company in charge of moving large concentrations of people in its fleet of 469 articulated buses.

The P-8 has a route that goes from the Reparto Eléctrico, in the Arroyo Naranjo municipality, up to the Pan American Village, located in the municipality of Habana del Este.

In its journey of one hour and 20 minutes it goes through the municipalities of Arroyo Naranjo, Diez de Octubre, Cerro, Centro Habana, Habana Vieja and Habana del Este.

When in late 2007 the Cuban government opened its wallet and bought 469 articulated buses in Russia, China and Belarus, the city bus service improved dramatically.

Metrobus, the company located in Nuevo Vedado, a stone’s throw from the Zoo on 26th, designed a route that covered all the important and busy roads of Havana.

There were 17 lines. And their frequency varied from 5 to 10 minutes in peak hours. Until mid-2010, with some interruptions, the system worked well.

By the last three months of the past year, bus service began to falter. At the Mulgoba terminal, where the  P-12, P-13 and P-16 buses are kept, for a route between Santiago de Las Vegas, Central Havana and Vedado, 37 out of a fleet of 70 buses were out of service, for lack of spare parts, tires and batteries.

At a session of parliament held in December 2010, the Cuban economic czar, Marino Murillo, recognized the problem and pointed out that there were no financial resources for large purchases of spare parts.

According to Murillo, the bureaucrats were to blame for the collapse of the transport service, because of their erratic calculations and poor management. He didn’t promise anything. He just affirmed that it’s possible the State might stop the tourist buses to keep the peoples’ buses rolling.

But in 2011 the service continues to be in a tailspin. This summer, when thousands of people go to the eastern beaches and the playgrounds or carnivals in Havana, the malfunction of public transport will make travel by bus crowded, and it will take people several hours to reach their destination.

In the Diez de Octubre municipality, the most populous in Havana, at any time of day the bus-stops are full of angry citizens, and between the heat and the bus delays, violence can surface.

Any stray touch on the “guagua” — as buses are called in Cuba — an accidental kick or crazy comment, can unleash verbal or physical aggression among those who are daily forced to board, as if they were expert ninjas, the Metrobus company buses.

What’s worse is that there are hardly any alternatives. In Havana there is another state company, Metropolitan Omnibus, with several hundreds of Yutong buses, manufactured in China. They have been designed to fulfill a supporting role in the scheme of urban transportation.

Their frequency should be between 25 and 40 minutes. But they normally take an hour. Or more. Therefore, the major burden of responsibility for passengers belongs to Metrobus.

When people like Sara, who’s retired, have to arrive on time, they often leave home three hours in advance. And try to maintain an Asiatic calm. Sometimes the buses don’t stop at the bus-stop. And she, with her 60 years and several extra pounds, must run 100 yards, like a Jamaican sprinter, to board the bus through the back door.

Sara sees the bright side. “It gives me some exercise. And if I get on at the back door, I don’t pay.” Bus fare costs 40 cents.

But banks and service centers don’t usually have enough change. Therefore, people pay with one peso (five cents in CUCs). Those who pay. Alejo spends 60 pesos per month to move around the city ($2.50 in CUCS).

It may seem small, but it means a third of his salary as a school custodian. A trip inside one of these buses is infuriating. Their routes are extensive. From the starting point to the end, the trip usually takes between one hour, the fastest, to an hour and a half if it crosses 10 municipalities by going around the city.

If we believe sources inside Metrobus, currently there are 227 bus-stops. And problems because of a lack of spare parts or damages after an accident. To minimize the crisis, the Havana government is taking some measures, such as using workplace vehicles in peak hours and on important routes, in an attempt to alleviate the urban transport deficit.

Since Castro came to power in January 1959, transport in Havana has been a headache.

Not even in better times, when the Communist countries of Eastern Europe and the Soviet Union existed and gave us petroleum and plumbing supplies, has Cuba had a decent transport service in its capital.

It was thought a metro would be built with the help of North Korea. But everything remained in the planning stages. Getting around the city this summer will be an ordeal. Between the heat and the bad service.

Only those who have money, thanks to remittances, working for themselves, getting good tips, having illegal businesses or stealing from their jobs, can afford the luxury of taking private taxis that for 10 or 20 pesos take you quickly to any place in the city.

About 10,000 private cars have become the best fleet of taxis in Havana. Most were made in the United States and have over 60 years of use. Their owners have had to “invent” to keep rolling. But they work. And well. In Cuba there are things that nobody can explain.