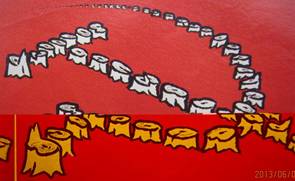 It’s worth noting that, in most of the programmatic documents of the Old and the New Left, the concept that “the workers and peasants constitute the principal movers of society, together with the participation of other of its leaders” remains unalterable. This concept that, perhaps, in the epoch of utopian socialism might be valid, owing to its being a simple, theoretical proposal without any basis in experience, today and for much time, has been totally absurd.

The nascent French bourgeoisie used the malaise of the masses to unleash and guide the French Revolution, using them as a shock force for violent confrontations, but reserving for itself the role of leading. The Russian political agitators, nominating themselves as “professional revolutionaries,” did the same thing with the workers, peasants and soldiers, unleashing the October Revolution, but reserving for themselves the exercise of power. Neither Robespierre, Danton, Marat, Desmoulins and others in the first case, nor Lenin, Trotsky and Stalin in the second, were workers or peasants. In the Cuban Revolution something else happened: None of the principal leaders was a worker or peasant; rather they belonged to the middle class and the petit bourgeoisie, being principally professionals and students. The workers and peasants simply constituted masses to be used.

If we are realists, we must accept that, in the end, Leonardo da Vinci, Pasteur, Ford, Edison, the Wright Brothers, Bill Gates and many others, to mention only a few in the field of science, have brought more to human development and society than all the workers and peasants put together in their respective countries as well as in the world. From the appropriation of fire up to the invention of the wheel, printing, the steam engine, the internal combustion motor, electricity, the use of the atom, computers, the Internet and everything that amazes us today, it’s been the talent of brilliant people who with their work and tenacity have played the role of being the true moving forces of society. The principal merit of bringing development to society belongs to them and not to generic workers and peasants. This has been repeated in medicine, the arts, architecture, transport, communications and in many other spheres of human activity.

To pretend to eternally bestow this honor on workers and peasants, without taking into account the process of continual change, in addition to being dogmatic is unreal, and forms part of the archaic concepts that still prevail in part of the thinking of the current Left. It’s about time that the hammer and sickle were replaced with the combine and programmable robotic lathes.