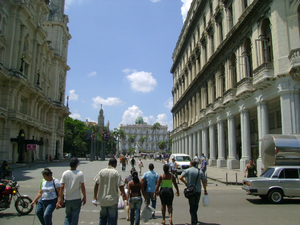 God willing, before spring of 2013 arrives, Ernesto, thirty-five years old and the owner of a small confectionery business in the Havana neighborhood ofSanto Suárez, will probably be able to travel to Madrid. He will stroll along the Plaza de Cibeles, and buy something in an outlet store or a Chinese street market. And if his brother-in-law buys him a ticket, he will sit in the south end ofSantiago Bernabeu Stadium and see Cristiano Ronaldo and the rest of the gang play. It is his lifelong dream.

If, in spite of the monstrous crisis devastating the Iberian peninsula, his sister in Vallecas* is able to advance him a few hundred euros to buy the tickets and the Spanish consulate in Havana does not deny him an exit visa at the last minute, he will send an email to his relatives and friends in Spain saying, “Meet me at Barajas Airport.”

Right now the much discussed emigration reform is the second most important topic of conversation among Cubans after the headache brought on by trying to find enough to eat every day. The desire to emigrate to find temporary work overseas to make a few decent dollars or euros, whether it be cutting down trees in a dense Canadian forest, clearing snow in Berlin or selling ice cream in Seville, plays a part in the future plans of many Cuban families.

Some are able to do it because they have relatives who were part of the first red-blooded group to reach the other side of the Florida Straits. After spending money on medical exams and waiting for the green light from US authorities, they manage to finally arrive in the sun-drenched city. Each year more than 20,000 people are able to realize their own American dream in this orderly, legal and secure way.

But not everyone in Cuba has relatives in Miami. There are other ways to enter the United States. As a result of the Cuban Adjustment Act, a bizarre federal law that grants automatic residency to any Cuban who manages to set foot on American soil, people on the island find ways to reach El Dorado. They include tales of heroic exploits such as transforming a 1950s Ford truck into a motorboat, leaving on a surf board or hiding within the landing gear of a commercial jet.

Hundreds of Cubans have lost their lives trying to escape the Communist autocracy. There are no exact figures. According to the U.S. Coast Guard one in three balseros ends up as shark bait. The Cuban Adjustment Act is like a marathon; not everyone makes it to the end. It is like a game of Russian roulette in which you could lose your raft or your life. There are stories circulating on the web of people being swindled by bands of human traffickers. Numerous countrymen have seen their hopes dashed, dying of hunger and thirst on a mountain in Colombia while trying to get to Panama or to a desert on the Mexican border.

If we add to these the regime’s absurd restrictions, which grant it the right to authorize or deny Cubans permission to leave and reenter the country, we arrive at a devastating conclusion: In the past fifty-three years we have lived under a perpetual state of siege. There is always a sense of gratitude when some of these perverse prohibitions are lifted, but GeneralRaúl Castro’s proposed reforms have the whiff of moldy cheese.

The imagination of foreign correspondents comes as a surprise, when they write headlines that starting in January of 2012, Cubans can go sightseeing. How many in Cuba will be able to do that? I assure you that they are the minority. The mandarins and their kin, those yes. They’ve already been doing it. They go to Margarita Island in Mallorca. These “tourists” are the exception.

Most Cubans who travel abroad and whose stay is longer than twenty-four months want to work hard and save money to repair their dilapidated houses, or buy new furniture and a 24-inch plasma screen TV. Only if things are going really well will they think about staying.

We Cubans cannot travel abroad because, in the first place, the money the state pays us is worthless. Even if you worked and saved for several years, it would not be enough to buy a round-trip ticket. Unlike Paco from Andalucia, John from Nebraska or Pepe from Mantilla, we can only travel if an uncle from Hialeah sends us one or two thousand dollars.

Economic dependence on relatives living in the diaspora is almost total. Any good that comes to a middle-class families in Cubans who do not receive handouts from the government, or who are not famous writers or musicians, is dependent on those who live in the “Yuma**,” from where almost all the shoddy material entering the island comes. Improvement in the quality of life for the average citizen is intimately linked to the remittances and aid sent by family and friends living in exile. The same applies to one’s ability to travel. The expenses are covered by residents on the other shore.

We have not even talked about the restrictions contemplated in the new emigration reform with respect to professionals or dissidents.For Raúl Rivero or Carlos Alberto Montaner the regime will continue to deny them permission to visit their homeland. And a telecommunications engineer’s ticket will be cancelled by a grim emigration official alleging issues of national security.

The government washes its hands like Pontius Pilate by lifting restrictions on people like Ernesto the confectioner, with his plans to travel to Madrid. Professionals and dissidents, meanwhile, remain on the black list.

*Translator’s note: A working-class neighborhood of Madrid.
**Colloquial name for the United Staes.