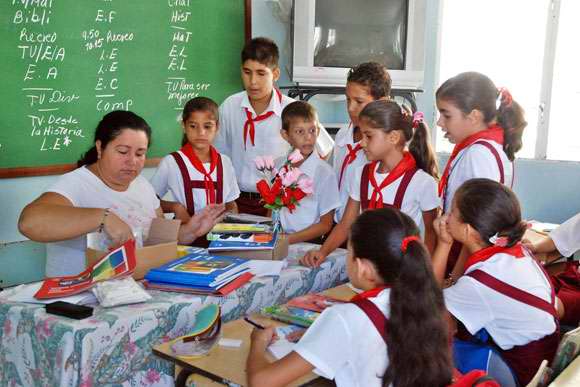 HAVANA, Cuba , December, www.cubanet.org – While the celebrations for the Day of the Educator succeeded as a cultural fact, in the Palace of Conventions at the Second Regular Session of the Eighth Legislature of the National Assembly of People’s Power, with rhetoric of “the changes are more socialism,” but they did not publicly honor the work of teachers. Nor did they envision real changes to the education sector which urgently needs attention, given the profound problems suffered in Cuban society with regards to the development of values.

It’s worth remembering that the Castro regime, from the early years of its government, transformed a secular educational system into an atheist one. From that point forward, students and teachers studied in the schools in the countryside and teaching outposts.

Since then, Cuban education has remained under the “scientific” doctrine of Marxism-Leninism, idealizing the New Man as if he were sculpted in bronze. Martí’s ideas faded from the schools, to the point where it was questionable to call the Apostle (as we refer to José Martí) our National Hero.

Decades later the dictatorship has tried to refocus the works and thoughts of the Apostle to suit the convenience of the Communist autocracy, but without retracting their errors. However, none of these measures could extinguish the secular educational doctrine of Father Felix Varela, nor the historical memory of the Cuban nation, tied to beautiful traditions.

Teacher’s Day is of special significance to the Cuban family, dignifying their role and exalting their qualities, in a way that transcends different nuances. On December 22, parents and students try to get a gift for their teacher, but most do not have the resources to do so, something that highlights the social differences. The teachers also suffer and share in the poverty of our people.

Today, the scandalous disaster of educational policy is painfully obvious. The teacher in Cuba, with the education required, barely earns $25 a month. The regime earns large sums of money from lending out scientists and teachers to other countries, but Cuban teachers do not receive the compensation they deserve.