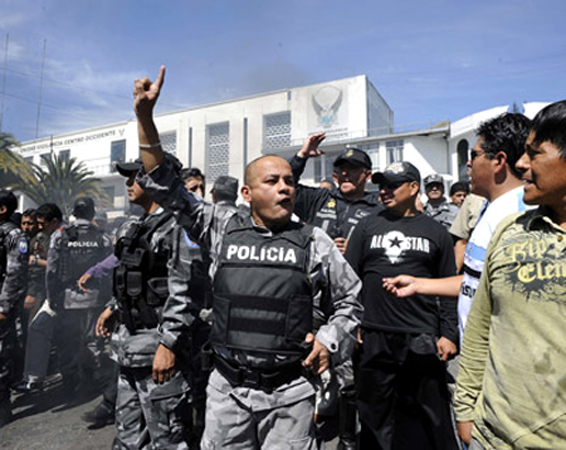 Is there any lesson Latin Americans can take from the recent appalling events in Ecuador, where a group of mutinous police, demanding the repeal of a law affecting them, kidnapped and physically assaulted the president of the Republic?

I believe so. I think that incidents of this nature have a radius of action a hundred times greater than the simple context in which they occur, and they shed a very clear light on certain practices that concern not just a handful of citizens, but an entire region.

What took place in Quito last Thursday has, in my opinion, an exact definition: embarrassing. Allow me to set aside the definitions of legality, democracy, constitutionality, because in truth, the feeling generated in me — as a television viewer and ultimately a Latin American — by this Hollywood spectacle of kidnappings, mobs, nocturnal shootings and risky rescues, was just that: a deep shame.

In the first place, what is the origin of this political riot that could evolve into a coup d’etat (although I differ with those who say that was the original objective)? It was the discontent of an important sector of the Ecuadorian national police with the passage of a Public Service Law which did away with certain benefits — salary increases and bonus rewards for years of service.

The impending loss of these benefits had already caused those affected to hold negative opinions (reaction rather than logic), and in order to discuss the new uses of the dollars saved, and the fairness of the measure, the Ecuadorean president had gone in person to the Police Headquarters in Quito.

The final outcome of the presumed dialog was physical aggression not only against a leader — who, whatever people say, enjoys wide popular support in his country — but who is also a human being who was recovering from an operation on his right knee.

The demand from the insurgents remained the same: “You abrogate this law and we’ll stop everything,” was more or less the offer of his captors.

Now, the first question that could be asked about this act of social barbarism is: What kind of confidence can Ecuador have in its institutions, after one of the most visible, and by definition the one charged with ensuring public order, engaged in such an uncivilized and violent act?

At that moment, trying to mentally weigh the impact of what I saw on television, I remembered a brief social essay by Mario Vargas Llosa. It was titled, “Why has Latin America failed?” One of the fundamental ideas that great writer (in the past also a politician) defended was that there cannot be sustainable democratic development in our region while our institutions continue to be so greatly discredited, and while the people do not really believe in them.

I subscribe to this statement one hundred percent. How can Latin Americans achieve a prosperity that is not only economic, but also social and cultural, while the institutions created to safeguard the functioning of society behave themselves, at times, like legalized gangsters?

Latin Americans cannot have confidence in a renewal process while the judges who make the laws are officials who can be bought and sold (Mexico: case in point), or puppets who distort the law whenever their government master demands it of them: See Venezuela.

How can we pretend to elevate our region to a more respectable and dignified status in the eyes of the world, if the police are more corrupt than the narcotraffickers, and common citizens often don’t know who to fear more, the criminals or the supposed agents of public order?

How can Latin Americans have even the slightest level of self-esteem, when it has been more than a practice, and in fact a tradition, that the armies overthrow the presidents (just or unjust, democratic or totalitarian) and bathe in the blood that flows in the streets of their own countries?

This was the first conclusion I came to in the new case of Ecuador: the state of health of democracy in Latin American continues critical when a vital institution like the police believes it has the right to attack the highest authority of the nation, and present its demands as it would to any headquarters colleague.

Those responsible for these institutions can perhaps be replaced, but social awareness is not so easily replaced.

Another important point to consider is the speed with which so many leaders in our region rushed to ridicule an incident of this magnitude.

Me, although I am not even remotely a politician, understand that moderation and tact — when the pieces are not yet clear on the board — are primary in this profession.

Meanwhile, two presidents whom I don’t hesitate to define as the most lamentable in Latin America today — Hugo Chavez and Evo Morales — lost no time in making themselves the laughingstock once again, this time with the crisis in Ecuador as their stage.

The first was comandante Chavez, whom I remember cynically saying to Jaime Bayly in a television interview in 1997, before his investiture as president, that should he win at the ballot box it would not “go badly” for foreign investors, that he would respect private property and freedom of expression, both so necessary in his country.

Well, this current paradigm of governmental arrogance didn’t hesitate for a second to shout that the United States was the real orchestrator of this coup, and he repeated it a few more times, in case the grinning Amaryan who administers Bolivia wasn’t listening closely to what he should say. Evo heard, of course, and repeated it like a faithful clone.

With almost the same alacrity as the rest of the denounced governments, the United States officially and in no uncertain terms denounced this act against the president of Ecuador.

Not even the Cuban government dared, this time, to accuse the Americans, at least publicly, of being behind this incident. Nor has the one principally affected, Rafael Correa, who at other times hasn’t hesitated to confront U.S. policy hand-in-hand with his allies Chavez and Evo. But those two, one as the voice and the other as his echo, were consistent in their perennial effort to be the least respected presidents in our hemisphere.

I think this act of police insubordination in Quito, still offers us material for analysis. It will come to light whether — as Rafael Correa claimed from the outset (also unwisely and without proof) — the ex-president and coup leader Lucio Gutierrez had a hand in it, or if it was simply an event coordinated by the dissatisfied police.

Partisans of both hypotheses can say what they will, but there is no clear evidence that event was limited only to discontent among its participants, nor that it was an attempted coup where Gutierrez took an active part.

But what we can already take away as a definitive lesson from the attack suffered by a president in the exercise of his mandate, on the part of the police facing the loss of some of their economic benefits, is that a great deal is still left to be accomplished in Latin America to build First World countries, not only with regards to economics, but also mentally.

A typically Cuban anecdote related that a well-known politician, during the presidency of Tomás Estrada Palma at the beginning of the Republic, could find no better way to describe Cuba’s battered civil spirit than to say, “This is a country of cafés con leche and pork rinds.”

Offensive but true: Latin American nations, with such a tradition of blood and brawls, where three coups can happen in the same country in less than a decade, where the tradition of putting dictators in power is not dead, and where in the 21st Century a president can be slapped for taking away benefits, has not ceased to be, with a few exceptions, a region of cafés con leche and pork rinds.