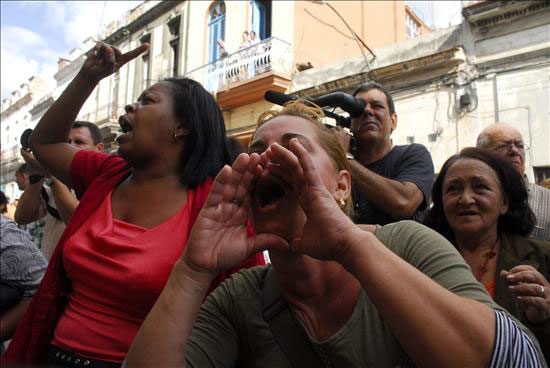 The sun beats down hard on the grey and white building located on Aguila street at the corner of Dragones, next to Chinatown in Havana. On that piece of real estate which was long ago given up by the Cuban Telephone Company, are the offices of ETESCA, the Empresa Cubana de Telecomunicaciones (the Cuban Telecommunications Company).

On his morning walk (a brief revolutionary act), the section leader chooses a group of workers to take part in the siege on Laura Pollan’s house next Saturday.  She is one of the key members of the Damas de Blanco (the Ladies in White), who this spring of 2010 have aroused fear and loathing within the agents of the government.

The marches by the Damas, who demand freedom for their imprisoned loved ones, has driven the regime of the Castro brothers to mount a permanent operation in front of Pollan’s house.

To deter the Damas, they use shock troops made up of employees from the stores and workplaces located near Laura Pollan’s house at 963 Neptuno, between Aramburu and Hospital, in Central Havana.

The story I am about to tell you happened two weeks ago.  A group of workers from ETESCA, almost all of them youth or communist party militants, were chosen to prevent the Ladies in White from leaving Pollan’s house.

In order to get out of having to participate, some of the women in the group claimed that they were sick or had family problems.  They just wanted to evade the issue.  But they are people who are prepared, with access to the Internet or illegal cable antennas in their homes.

They have seen what happens.  The offenses and the violence.  The boss gets strict:  “You all represent the organizations of the Party and the youth at the core, this isn’t a favor we are asking of you, it’s an order.”

They go without really wanting to.  For Lucrecia, a young woman recently graduated in telecommunications engineering, its an adventure of sorts.  She’ll see for the first time the “mercenaries” who make the news that she stealthily reads on the Internet.

The people who have been chosen for this task walk to Pollan’s house with feelings of anxiety.  If there’s a row, they won’t know what to do.  Rosario has never hit anyone in her life.  Much less women who demand freedom for their husbands, sons or brothers.  “If a family member of mine were being held prisoner, I would do the same thing they are doing,” she confesses.

More than hatred, they feel a certain admiration.  Some of them, the most uninformed, say that the Ladies in White are paid 20 dollars for each march.  “If that’s the way it is, some day I’ll join them,” says Elena smiling.

A dark-haired obese female, reminiscent of a Sumo Wrestler, leads the women. “She looked like a thug, with thick features, and never smiled,” remembers Lucrecia.

Other women who work in the neighborhood gather around the female employees of ETECSA.  Not a single man is around.  “What happens if there is a fight?” asks a girl.  The female soldier dressed in civilian clothing responds: “That’s our problem.” Referring to the security forces.

They are there for twelve hours sitting around the fence in front of Laura Pollan’s house.  Soldiers dressed as civilians moving about on Suzuki motorcycles constantly telling people where to go.

After three in the afternoon, when they are very hungry, some soldiers arrive with cardboard boxes containing disgusting cold black beans and rice with a boiled egg on top for the women.  Most of them protest.  “This is a mess, if all we get for participating in this shit and risking being hit is this crappy food, don’t count on me anymore” says one of the women.

An official tries to calm them down.  “Please, remember the difficult economic situation our country is experiencing.”  Just about all of the women throw the food in the garbage can.  As night falls, they mobilize.  The next day, the Damas de Blanco did not go out or do their march.

The next day all the ETESCA employees who took part in the harassment at Laura Pollán’s house complained to their bosses. “Don’t even think about asking me to go back for another act of repudiation; don’t count on me, go yourselves,” says one of them, insulted. The bosses are silent in the face of the flood of curses. They have no choice.

The government wants to sell the image that the people, acting spontaneously, are the ones who suppress the Ladies in White. Many people participate out of fear and for various considerations. Whether they are political or want to maintain that appearance. Nobody in a major company wants to be identified as “disaffected with the government.” Everything is staged. In the best Cuban style.

Translated by: Hank and Tomás A.