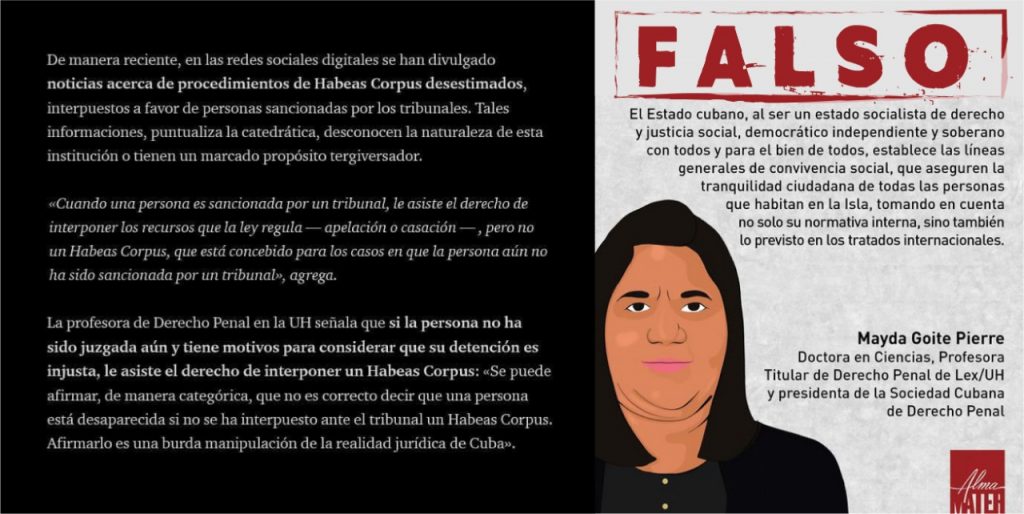 Cubalex, Laritza Diversent, 2 September 2021 — It is irresponsible (as a professional and as a teacher) for the “Doctor of Legal Sciences” Mayda Goite Pierre to give her opinion on things she doesn’t know about or hasn’t even studied. If silence is bad, a cover-up is worse; her opinions misinform the public and confuse her students.

Ms. Goite, at least take the trouble to read the International Convention against Forced Disappearance that the Cuban State signed and ratified, and is therefore obligated (erga omnes) to follow.

2. Direct intervention by state agents or others, with their consent and protection

3. Refusal to acknowledge the arrest and/or to reveal the fate or the whereabouts of the person concerned

MININT (Ministry of the Interior) agents have been committing crimes of forced disappearance before and after 11J (11 July).

Continuous or permanent nature of the enforced disappearance:

The act of disappearance and its execution

1. It begins with the deprivation of liberty of the person and the subsequent lack of information about the fate of the person;

2. It lasts as long as the person’s whereabouts are not known and the person’s identity is determined with certainty.

Once committed, the crime can be prolonged continuously or permanently until the moment when the fate or the whereabouts of the victim is established.

Forced disappearance is an illegal act that generates multiple and continuous violations of fundamental rights:

not to be arbitrarily detained,

not to be subjected to torture,

to life and to the recognition of legal personality.

Victims who suffer forced disappearance are treated contrary to inherent human dignity while in state custody.

Forced disappearance places the victim in a state of complete defenselessness and involves related crimes: the detained person is in a serious situation of vulnerability and risk of suffering irreparable damage to life and personal integrity due to the mere fact of prolonged separation and coercive isolation, which represents cruel and inhuman treatment.

Although the presentation of a Habeas Corpus petition obliges the courts to carry out judicial supervision of the actions of agents of the PNR (National Revolutionary Police) and State Security, under the guarantee of due process, there are legal obstacles and judicial practices that render this remedy ineffective.

Mrs. Goite, take the trouble to study the records that have been filed in the Provincial Court (I’m sure that you do have access) related to the requests to initiate this procedure and you will find a series of legal obstacles that make the Habeas Corpus petition ineffective, especially because they do not meet the standards that guarantee the protection of people against torture, ill-treatment, and forced disappearances, for the following reasons:

1. The law requires the petitioner for Habeas Corpus to designate “the place where the person is being deprived of it [liberty]; and the [government] authority or its agent, or the official who is maintaining” the deprivation of liberty against the person in whose favor the order of liberty is being requested. This requirement leaves people unprotected against possible forced disappearances, rendering the remedy ineffective.

2. The Criminal Procedure Law does not provide for the possibility of initiating a Habeas Corpus proceeding if a “provisional sentence or  arrest warrant” was issued in the process, which makes this remedy ineffective against arbitrary detentions.

If you follow my recommendation, you will also find judicial practices in the processing of this remedy that violate the fundamental principles that govern the judicial function, those which show the dependence on and complicity of judges with the agents of the Ministry of Interior, whom they are biased in favor of, to the detriment of the fundamental rights of detained persons.

When responding to the petitions presented, the acting judges:

1. Limit themselves to verifying that the documentation required by criminal procedural legislation was presented in the proceedings, without verifying the information provided in the request, and they only accept as valid the version of the authorities responsible for the arrest.

2. They never pronounce on the reasons for detention, violence, or use of force in arrests, incommunicado detention, forced disappearance and the right of access to defense, and they rarely report on transfers and places of detention where the person is held.

3. They almost never agree to hold an oral hearing, which is mandatory, and so they do not check for themselves the whereabouts and condition of the detained person.

4. Most of the time, they declare the petition inadequate and “improper”, arguing that the arrest took place “with all the procedural guarantees and within the established legal bounds.”

Lack of judicial control in the domestic context:

Judges evade their responsibility regarding judicial control of the actions of law enforcement officials and thereby:

1. They do not comply with the application of the law and fundamental principles of rights that govern the judicial function.

2. They favor arbitrariness, abuses of power, and violations of fundamental constitutional rights, especially the right to liberty and personal security.

3. They limit access to justice and fail to comply with the State’s international obligations regarding the prosecution of international crimes such as torture and forced disappearance, which are currently not included in [Cuban] criminal law, despite the fact that Cuba is a party to the respective international treaties.

There can be no doubt that the judges who have heard and denied the habeas corpus petitions presented as a result of 11J, are necessary cooperators in the serious human rights violations committed by agents of the Ministry of the Interior under orders from the political group that controls the State and Government, in order to guarantee their permanence in power, without political alternatives.