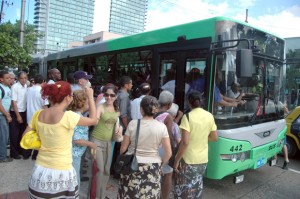 LA HABANA, Cuba, September, www.cubanet.org — With the 2013-2014 school year beginning, Havana’s public transport crisis is hard to overlook. Bus stops are already crowded with waiting passengers and the situation could become even worse in the coming weeks as students begin making increasing use of public transportation.

“After 2007, when the articulated buses came into service, the situation got a little better. Waiting time between buses was reduced to less than twenty minutes,” says Teresa, a route inspector in the Havana neighborhood Tenth of October. “But stops were still crowded and delays were longer than scheduled.”

On the Roundtable television show last July experts claimed the problem stemmed from the critical economic situation, which has led to almost half the buses serving the Cuban capital being idled.

Granma, the official newspaper of the Central Committee of the Communist Party, reported that at the last meeting of the Council of Ministers it was acknowledged that among the reasons fewer buses are in service are antiquated technology a shortage of spare parts, acts of vandalism and poor conditions in maintenance facilities and roadways.

The Havana Provincial Transport Agency announced that it will take steps to alleviate the situation. It has promised to reinforce inner-city public transportation along some routes in the capital. It is now providing the public with the well-known Russian-made “Giron” buses, which have survived three decades of marked decline in this sector. They will take the place of articulated and single-carriage buses made by the Chinese manufacturer Yutong.

Opinions indicate that transport workers and the average Cuban believe the island’s transportation system would benefit from a continued expansion of cooperatives beyond agricultural and into the urban transport sector. This includes cooperatives which would lease vehicles from the state as well as those that would offer technical assistance and vehicle repair services.

Examples of similar cooperatives are the so-called taxis ruteros. They offer more comfortable travel — some are even air-conditioned — for five pesos a ride.

Carlos, a laborer who works far from home, confesses, “I can’t afford this luxury. I have to make do with the one peso guagua. I make 315 pesos a month and, since I have to catch three guaguas to get to work, I have to watch what I spend.”

People like Carlos, who make barely ten pesos a day, cannot rely on the public transport system. If they want to avoid having what little they earn docked, they must get to work on time, which means leaving home up to three hours in advance.

In Cuba, public transport is a vital component in gauging the success of the “updating of the economic model” called for in the economic policy guidelines. This sector is almost completely funded through the state budget. This is the reason so many people blame the Cuban state for not meeting demand.