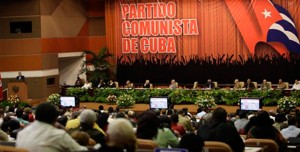 HAVANA, Cuba , September, www.cubanet.org – Out of every ten members of the Communist Youth League, when they get to the age when they should become members of the Cuban Communist Party (CCP), or, on the contrary, become politically deactivated, only two are willing to maintain their membership; and of those two, only one ends up joining the ranks of the CCP. It’s an open secret racing through Havana these days. Meanwhile, other classified information, that also passes through the gossip chain, makes it clear that the Party is down to a conga step, whether by old age or the death of its members, or the numerous requests to step down for family reunification abroad, or simply because of disappointment.

At this rate, soon the regime’s chieftains will have to order their followers to take to the streets to collect aspiring communists, just as they now stockpile little cans of beer from the trash to recycle them for industry. They should also remodel that bubbly slogan according to which men die but the Party is immortal, because although it’s not dead yet (and it just may not die on time, the Party is rotting alive.

This is a double oxymoron, I know, because in some sense if can’t die because it was born dead, nor can it rot because it was born rotten. But the fact is that its old self-image as the revolutionary vanguard of the people has been hopelessly hurled over the precipice. And despite how much they try to hide their surprise, it is a well-known secret that the chieftains are losing the very few hairs remaining on their heads realizing the way in which the number of 800,000 Cuban communists (as per Raul Castro’s own declaration in April, 2011) keeps getting smaller day by day.

Sean Penn, who has proven to be as good an actor as he is a stupid idiot in politics, said recently that in free elections in Cuba the Communist Party would win eighty percent of the vote. As soon as we stop laughing, perhaps it’s worth clarifying that, judging by the good news we hear, not even eighty percent of the remaining members would now vote for their own party, even if they do represent an insignificant number.

What’s more, if before 1959 the Communist Party earned five percent of Cubans’ votes, that percentage seems an exaggeration this days. And at the rate it’s going, it will be one as well, even in the Party nuclei.

Not that the chieftains need a party to dominate Cuba. And much less so now, when the strength of having existed so much time virtually, it is passing from a solid to a gas. However, although it no longer has any influence among the population, it continues to serve as a mask to disguise their system of monarchical power, especially to their friends and accomplices abroad, like Sean Penn, socialists from the belly button down, who insist on seeing our dictatorship as a beacon, and the people as animals in the zoo, who are attractive only when viewed from afar and behind the bars.

Certainly it is a source of embarrassment when those who, from Hollywood, or from American universities, or from their sanctums in Europe or Latin American, or even from some prestigious international organizations like the United Nations, persist in giving credit to a tyrannical edict like that which orders us, through the fifth article of the Constitution of the Republic, to see: “The Communist Party of Cuba, following José Martí and Marxist-Leninist, the organized vanguard of the Cuban nation, is the highest governing force of or our society and of the State…”

Are they really ignorant, these gentlemen, of the historic and deeply rooted lack of influence of the Party among our ordinary people? Not now, not even in what we could call its better times. Meanwhile, the more its membership expanded, the less effective and influential it was. The more it is promoted by propaganda as the vanguard of the masses, the less able it has been to attract by its virtues and examples. What the Communists here should be to the leaders of the Revolution, with regards to popular recognition and assimilation (not acclamation), has had to be paid with a fictitious existence as a political party while serving as a repressive instrument of power, more antagonistic as it becomes more omnipresent. Don’t Sean Penn and his gang know this?

Are they also unaware that always, but particularly so today, the ideas, the plans, the dogmas of the Communist Party represent the most orthodox and backward, schematic, rigid, intolerant, incontestable, sectarian, the most obsolete of our contemporary history? Do they not also know that, for most Cubans it does not and never has represented real power, but rather nothing more than the uselessness and long and tedious harangues with no substance?

I speak, of course, of the Party as an institution, as well as its representatives in government, which have little to do with much of the rank and file, usually unaware of the works of Marx, Engels, Lenin… simple ideologized game pieces, who acted and act from inertia, following orders from above, and apparently only just now, in a rush, perhaps, to reclaim their guts, having begun to think with their own heads.

José Hugo Fernández is the author, among other works, of the novels El clan de los suicidas, Los crímenes de Aurika, Las mariposas no aletean los sábados and Parábola de Belén con los Pastores, as well as the story collections La isla de los mirlos negros and Yo que fui tranvía del deseo, and the book of chronicles Siluetas contra el muro. He lives in Havana where he has worked as an independent journalist since 1993.