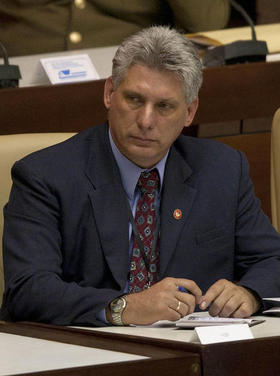 Knowing how to read between the lines is a prerequisite to understanding Cuban politics. The structure of power on the Island is short on details, such that we must interpret the silences as well as the seemingly inconsequential data. The ascension of Miguel Diaz-Canel, to the vice presidency of the Council of State has followed a well-known script, easily detected by analysts and the curious for months. His growing presence in the national media and his having accompanied Raul Castro to the Community of Latin American and Caribbean States (CELAC) Summit, already augured his ascent to the second post of the Cuban elite.

Díaz-Canel possesses characteristics that undoubtedly influenced his appointment. A man who shines very little, himself, from whom we cannot recall a single phrase of his monotonous speeches, someone who projects absolute fidelity, a good physical presence and a dose of youth (at 52), so needed by Raul Castro to show that his government is generationally renewing itself. Restrained and sober in public, he seems to know that charisma only bring problems when you are that close to the historic nomenklatura. He has skillfully passed all the tests of loyalty and tameness the General President has put in his path, before being allowed to sit in the number two seat.

Although the real power remains in the hands of the octogenarians, the biological clock has forced the Cuban regime to publicly signal who the  dauphin is. He who is among those who have survived the successive purges of past years, the last of which ended the career of vice president Carlos Lage and then foreign minister Felipe Perez Roque. The Cuban elite has chosen its successor, spurred more by the biological imperative than by real desires for renewal or reform. Time was pressing and didn’t allow for molding new candidates to choose among.

Diaz-Canel’s climb to the top was short; he started in the Cuban armed forces and then became the leader of the Young Communists Union. From there he emerged as the first secretary of the Communist Party in Holguin province, and also held the position of Minister of Higher Education. His trump card has been obedience, that ability to make his superiors believe that he is the man of continuity, not of rupture. Clearly, this could be the strategy of a chameleon who prefers to blend into his environment until he rose to a real position of power. We will have to see how he behaves when the gaze of Raul Castro is no longer upon him.

For now, Miguel Diaz-Canel awaits an uncertain journey fraught with booby-traps. It would not be the first time a dauphin believed himself indispensable and ended up accused by his own creators of having become addicted to the “honey of power.”* So he will have to be cautious, responsive to every order, and patient.

*Translator’s note: A phrase used by Fidel Castro in reference to Carlos Lage and Felipe Perez Roque when they were ousted.