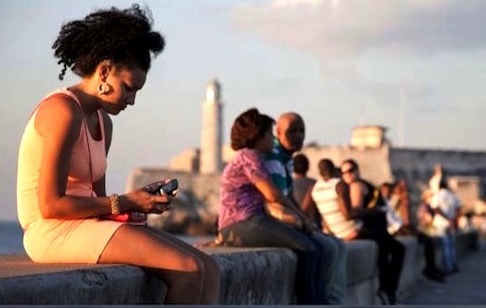 HAVANA, Cuba — The Cuba-United States confrontation increased its pitch with the publication by the daily Granma of the article, Zunzuneo: The Noise of Subversion, commenting on a report by the AP news agency about ZunZuneo and Piramideo, two text message services (SMS) accused of having illegally complied a list of telephone numbers to which it sent unsolicited messages on innocent topics like sports and culture, but which later would become subversive messages to young people, considered “susceptible to political change.”

According to Granma, the cornerstone of the ZunZuneo plan — a network that emerged in February 2010 — was to access the “data and phone numbers of Cubacel users,” the branch with the most ETECSA users.  In the same paragraph, the Communist Party daily suggests: “It is not clear to the AP how the telephone numbers were obtained although it appears to indicate that it was done in an illicit manner.”

Maybe the AP does not know that the ETECSA database — guide of mobile and fixed (residential and commercial) telephone numbers — was leaked in early 2010 to laptop and desktop computers all over the Island.  And that, immediately, promotional texts began to appear issued by Cuban artistic groups or clubs and bulk messages — unsolicited — demanding freedom for the five Cuban spies.  I remember perfectly one that said:  “To love justice is to defend the five.  End injustice!  Freedom now!”

The official ETECSA database is updated every year. The latest version that circulates in the population accounts for 60 per cent of the mobile phones, some 200,000 users, not counting the residential sector. The weight of this application in megabytes is between 200 and 450 (by design) and can be copied in any digital format.

Is it possible that ZunZuneo got 25 thousand subscribers in less than six months without the need of a database as the AP well reflects?  Why not talk about the so popular data leakage by ETECSA and the proselytizing in its unsolicited text messages?

Thanks to a friend not tied to the internal oppositon or independent journalism, I subscribed to ZunZuneo in 2010.  It was all very simple, it just required sending an SMS to a phone number outside the border and you would receive news about sports, culture or science or technology.  Also, one could subscribe on the Internet, at a time when the number of connected Cubans was barely 2.9 percent of the population.

Often senior citizens receive in Cuba promotional messages about a reggaeton concert, also the “March of the Torches Parade in Havana — The Great Country” is convened through Cubacel, as happened January 27 this year.  Is this not, perhaps, the equivalent of infringing on “the laws of privacy” as Granma says of ZunZuneo?

Nothing is said about the database leak by Cubacel, software that has generated groups of clandestine users and even phantom prepaid top-ups within the informal Cuban market.

This Thursday, the US government responded to the AP’s accusations. White House spokesman Jay Carney confirmed that his government was involved in the program and that it even had been approved in Congress. But the spokesman for the State Department, Marie Harf, denied on Thursday that the social network was the product of a secret or undercover operation. “We were trying to expand the space for Cubans to express themselves,” said Harf.For his part, White House spokesman Jay Carney denied that ZunZuneo had an undercover nature although he clarified that the US president supports efforts to expand communications in Cuba.

AP and international media that have reproduced the “scandal” of ZunZuneo should know that the ZunZuneo application never was used for any “subversive” movement in Cuba. Instead, the Cuban government used the ETECSA database to send text messages advocating the liberation of the five spies or the attendance at pro-governmental political events.

About a year ago, the ZunZuneo messages stopped. Cubans still do not communicate freely.