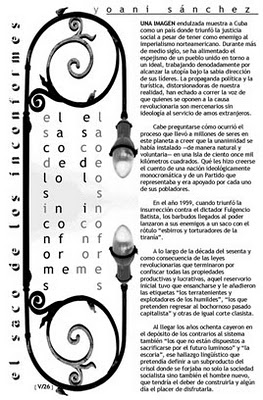 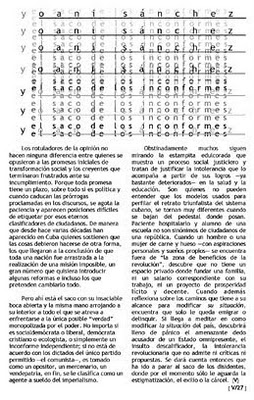 THE SACK OF THE DISSIDENTS

A sugar-coated image shows Cuba as a country where social justice triumphed, despite having North American imperialism as an enemy. For more than half a century, the country has fed the illusion of a people united in support of an ideal, working hard to develop a Utopia under the wise direction of its leaders. The political and tourist propaganda, distorting our reality, have put out the word that those who oppose the revolutionary cause are mercenaries without ideology, in the service of foreign masters.

One has to wonder how it happened, a process that led millions on this planet to believe that unanimity was installed, naturally and voluntarily, on an island of 111,000 square kilometers. What made them believe the story of a nation ideologically monochromatic and of a Party that represented and was supported by every single one of its inhabitants.

In 1959, when the insurrection against the dictator Fulgencio Batista triumphed, the bearded ones came to power, throwing their enemies into a sack labeled, “thugs and torturers of the tyranny.”

Throughout the decade of the sixties, and as a consequence of the revolutionary laws that ultimately confiscated all productive and lucrative property, that initial definition had to be expanded, adding the labels “the landowners and exploiters of the humble,” and “those who are trying to return to the shameless capitalist past,” and other similar class epitaphs.

Coming into the decade of the eighties, others who fell into the bin of those opposing the system, including “those who are not willing to sacrifice for a bright future,” and “the scum,” this linguistic discovery that tried to define a subproduct of the crucible that forged not only the socialist society but also the new man, who would have the duty to build, and one day to enjoy, the Utopia.

The labelers of opinion recognize no difference between those who opposed the early promises of social transformation, and those believers who ended up frustrated before its failure to come to pass. Because every promise has a deadline, especially if it is a political promise, and when the extensions proclaimed in the speeches expire, patience runs out and difficult-to-label positions appear in those eternally classified as citizens. So over several decades there have appeared in Cuba those who argue that things must be done another way, those who come to the conclusion that an entire nation was dragged into the realization of a mission impossible, many of whom would like to introduce some reforms, including those who would lie to change everything.

But there’s the sack with its insatiable open mouth, and the same hand throwing into it everyone who dares to confront the one possible “truth” monopolized by the powers-that-be. It doesn’t matter if it’s a Social Democrat or a Liberal, a Christian Democrat or an Environmentalist, a simply an independent non-conformist; if they don’t agree with the dictates of the only permitted party — the Communist Party — they are taken as opponents, mercenaries, traitors, in short, they are classified as agents in the pay of the imperialists.

Obstinately, many continue to look at the rosy little picture that shows a social justice process that tries to justify the intolerance that goes along with its achievements — already badly deteriorated — in health and education. They are those who cannot understand that the models used to delineate the triumphalist portrait of the Cuban system turn out very differently when they come down from the pedestal where they pose. Hospital patient and school student are not synonymous with the citizens of a republic. When a man and a woman, of flesh and blood, with their own aspirations and dreams, find themselves outside “the zone of benefits of the Revolution,” they discover they have no private space to build a family, nor wages commensurate with their work, nor any way to achieve a legal and decent prosperity.

When they also reflect on the paths within their power to change their situation, they fine only two: emigration or crime. If they come to meditate on how to change the situation of the country, they are overcome by panic at the threatening finger of the omnipresent State, the insults, the revolutionary intolerance that allows no criticism, no suggestions. Then they realize they’ve been thrown into the sack with the dissidents, where all that awaits them are stigmatization, exile, or the prison cell.