The despicable act in “Feria de Santana” was also executed against one of the most loved and respected senators, with the recognized militancy of the left.

If the repercussions of Yoani Sanchez’s coming to Brazil confirmed–according to the Brazilian press–the organization of the “acts of repudiation” by the Cuban embassy, materialized in the noisy welcome for Yoani at the Recife airport on the part of a little group in the pay of the Cuban ambassador (confirming the information in the magazine VEJA), then the attempted lynching in “Feria de Santana” by another claque brought from other cities in Bahia state, definitively settled Brazilian public opinion on the side of the frail and energetic Cuban. The villainy of “Feria de Santana” was executed also against one of the most loved and respected senators among Brazilian politicians, Eduardo Suplicy, with recognized militancy on the left, the objects of insults and disrespect from the bloodthirsty mob. What happened was an act of unacceptable intolerance, not only against an supposed “CIA agent” blogger, as they wanted to see it, but an attempt by a foreign country (the Cuban government) to define the course of internal policy South American giant.

After the public presentation in “Feria de Santana,” Bahía, Brazil, which was meant to be a showing of the Brazilian filmmaker Dado Galvão’s documentary–an objective frustrated thanks to a band of protestors paid by the Cuban embassy in Brasilia– Yoani Sanchez’s 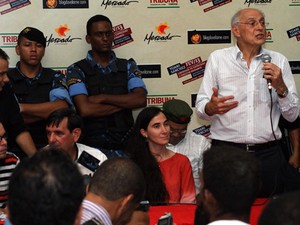 following presentations had the simple and only objective of hearing what she had to say about a wide range of topics, all focused on an island greatly loved by Brazilians of all stripes: Cuba. After that first night of intolerance, overcome by the courage of the blogger and the support of senator Suplicy, Yoani was offered dinner at the residence of one of the organizers of the activities in the city, where the Cuban blogger shared the evening with Senator Suplicy, an important participant in the acts of that day, founder and leading member of the Brazilian Labor Party, as is well-known. Yoani and Suplicy spoke at length.

The following day, Tuesday, February 19, Yoani made an appearance, in the morning, before the national and international press, attended by credentialed journalists only. At the end of the afternoon she would have a second presentation before students at a local University, that would be held with all the necessary security to guarantee the Cuban blogger’s participation in the event, without risking any physical attack. 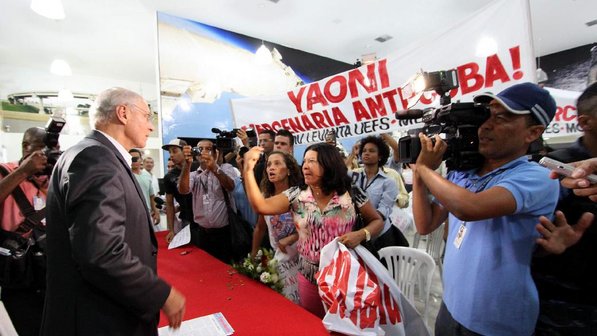 Yoani Sanchez is a frail and frugal woman. During the dinner on Monday night, February 18, and the breakfast the next day, I saw that she “didn’t eat anything.” “Yoani, eat the meat, it’s delicious,” I told her during dinner. “I don’t care for meat, it’s that I’m not used to it.” At breakfast she didn’t even try the cafe con leche. “In Cuba I just breakfast on a little coffee.” A table covered in fruit, bananas among them, didn’t even grab her attention. And confirming the lies in the dossier prepared by the Cuban political police against her, she didn’t even drink beer during dinner, “I don’t care for it.” In reality, Yoani’s physical fragility is in part a product of her own physical build, but also a product of a deficient diet, not necessarily related to the scarcity of products, something comprehensible inside Cuba, but unexplainable outside. It’s a simple lack of being used to eating. 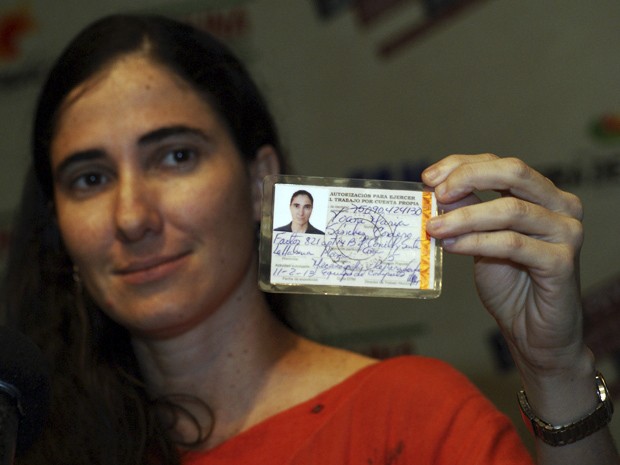 Yoani’s appearance before the press on Tuesday morning, the 19th, was normal. There were no protesters outside the auditorium where some 30-40 journalists waited to hear Yoani. The moderator of the activity requested, because there were many local and regional journalists, that the blogger’s responses be translated into Portuguese. As impromptu translator, I sat at the table with Yoani at the table on the dais, at a small local theater, where the audience consisted exclusively of journalists, videographers and photographers.

There were four themes that were repeated in almost all of Yoani’s public appearances, which also played in almost every interview she gave in Brazil: the U.S. embargo, “the 5″ spies imprisoned in the U.S., the Guantanamo naval base, and the sources financing for her long international trip. These questions, imposed by the agenda of the Cuban embassy and not by Yoani’s own, were the “main dish” of the previous day, to which was then added her alleged “membership in the American CIA,” which Yoani then dispatched with another question the rioters: “Do you believe that if the government of Cuba knows that I really ama CIA agent, I could move freely through Havana. ” 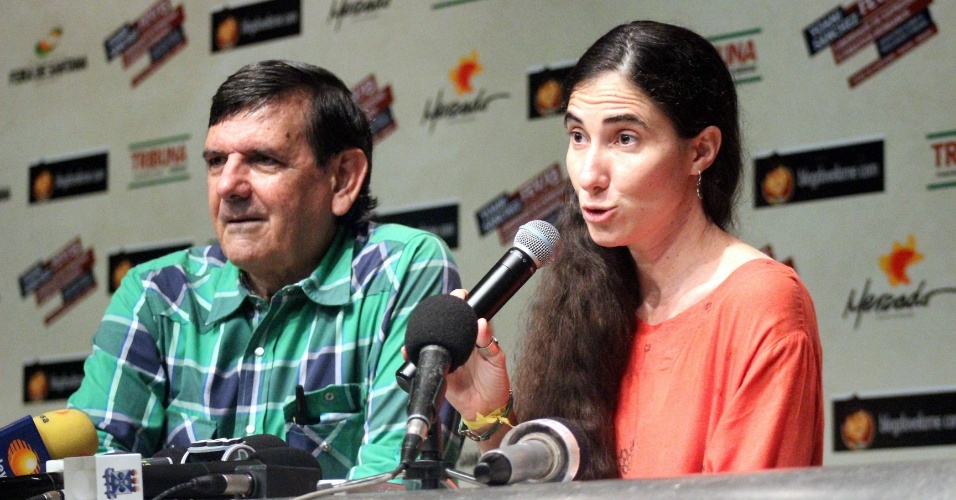 Yoani has responded on the embargo on more than 20 occasions with the following point of view: “I am against the embargo for three reasons: first, I consider it interference and detest all interference by a huge country in the affairs of a small country; second, I believe it is a ‘fossil of the cold war,’ that should be eliminated to move forward; and third, because the embargo is the savior of the Cuban government to justify its economic inefficiency, and now the complete scarcity of products and services is justified by blaming the embargo.” In the press conference she added, “The embargo is not an issue for us Cubans living on the Island; what is important inside Cuba is the embargo the government has against us, they have embargoed our freedom of expression, of association, of access to the Internet, among others.”

About “the 5” ‘Interior Ministry members’ (as Yoani qualifies) said: “let me tell you they were not 5, but 14 members of the Cuban Ministry of the Interior, U.S. prisoners inside while formed a spy network called’ Red Wasp ‘, 9 of them they made agreements with U.S. prosecutors and acknowledged their guilt, involving the five partners who would not make agreements, and therefore received longer sentences. No one is innocent.” 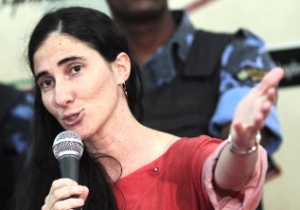 About the prison in Guantanamo Bay she said: “I am a Cuban activist who fights to defend the lack of freedoms of all kinds in Cuba; the Guantanamo prison, although it is in Cuba, is not a Cuban problem, it is American; I know that in the U.S. there are many activists fighting to close the Guantanamo prison, so they are different problems; they say there have been violations of human rights within the prison, well, I do not agree with the violation of human rights, in any place where they are violated.”

On the source of funding, she said: “My trip to Brazil was funded by a collection among Cubans living in Brazil and Brazilian friends of Dado Galvão (I am a witness to the collection, to which I put in 300 Reales, about 150 dollars), an account of which Galvão has posted transparently on his blog on the Internet.

My trip to Prague is funded by Amnesty International, because I was invited as a juror for a film festival they organized. I will go to Italy to collect an award that I had not been allowed to collect, which included–at that time–the plane ticket. From Italy I will go to Spain for the El Pais award, which also includes airfare. From Spain I go to New York, by invitation of students from two universities, which offer courses on computer science. From NY I will go to Miami to visit my sister, with airfare paid for with her money. From Miami I am going to Mexico to a meeting of the Inter American Press Association, IAPA, of which I am vice president (an office without pay, which Cuban propaganda reported erroneously) but they did pay for my ticket.

Early in the evening of Tuesday, the 19th, we prepared for another assault by the mob, at a function being held at a university. We were completely wrong. Yoani’s presentation was in a kind of sports venue, with dimensions somewhat larger than a tennis court, with an audience of two thousand college students, not to neglect the little group of 15-20 being paid by the embassy, with their posters, but not screaming, because the mass of 2,000 students present simply shut them up by whistling and a louder shout of repudiation.

Yoani and I sat on a relatively high stage, which protected us. The audience was seated in plastic chairs, with the first row a prudent distance from the platform, also for safety. It was tremendous. Yoani talked about her blog, her experience in computers, how she built a computer from old parts and how she dabbled in software to be able, herself, to mount her blog on the Internet.

Yoani and I sat on a relatively high stage, which protected us. The audience was seated in plastic chairs, with the first row a prudent distance from the platform, also for safety. It was tremendous. Yoani talked about her blog, her experience in computers, how she built a computer from old parts and how she dabbled in software to be able, herself, to mount her blog on the Internet.

In the Q&A session, several of the small group from the embassy were quick to take the floor to try to “create a crisis” for Yoani. The leader of the embassy employees asked the first question, for which he dragged out his introduction longer than necessary; really it was a harangue, with his back to Yoani and facing the audience. I, seated next to Yoani, interrupted and said to him, “What is your question, please?” He answered me something about he had to continue talking, and I said, “Look, the people here came to hear Yoani, not you.” I wanted to continue and say that his right was to ask a question with a reasonable introduction, but not to make speeches, but I couldn’t speak because the audience stood up and applauded my words telling him to ask his question. When the applause, and the repudiation of the embassy representative had died down, the young man wanted to continue his speech and the audience shut him up with a memorable booing. The question was from the same script as yesterday.

The best part was after the first three questions, asked by the small group of militants (which remained calm the whole time because of the adverse balance of forces). The rest of the questions came from students interested in learning from Yoani about Cuba, and almost always included an introduction criticizing extremists who harassed the blogger, also making references to the corruption scandals of the Brazilian leftist parties known as the mensualón [in reference to monthly payments made to legislators to vote with the ruling party]. They began to reverse the situation of Yoani, who shone brightly, answering multiple questions, always followed by a standing ovation. From that night onwards this was repeated in all public presentations.