As the morning of February 18 dawned across Brazil, the smiling photo of the Cuban Yoani Sanchez was stamped on the front page of most Brazilian newspapers of wide circulation, as well as a good share of the five thousand regional and municipal newspapers.

The simple reception prepared for the blogger by Brazilian and Cuban friends, became national news thanks to the conspiracy of the Cuban ambassador in Brasilia, the national scandal uncovered by VEJA magazine–the publication of part of the dossier full of slanders against the Cuban–and the serenity and peace of spirit, along with Yoani Sanchez’s permanent smile of and her signature long hair flowing down her body.

After giving her first three interviews in the early morning, shortly after her arrival on South American soil, and far from showing the exhaustion of her long journey from Cuba–with a stop in Panama City–the Cuban blogger received the first of a long series of displays of support from Brazilians–which were not among those organized for her arrival–many of whom hadn’t even heard of her blog before. In the VIP room provided by the airline that had brought her from Havana, she gave her first interviews, with answers that appeared on the front pages of major Brazilian newspapers and began a long saga of pulling back the veil on the Castros who, until that moment, had hidden the Cuban reality from the Brazilian public, and which turned her into a heroine.

From the VIP lounge we were taken, through the interior hallways of administrative offices of the Recife airport–for fear that the conventional hallways of the airport would be full of demonstrators paid for the by Cuban embassy–to the operations room of the airline that would take us from Recife to the city of Salvador, capital of Bahia State, the stage for the first public appearance of the famous Cuban blogger. The operations room of the Brazilian airline was little, enough for a few work tables, communication equipment and computers, where we were “treated like royalty” by the business’s operations workers, who offered us the use of their facility. Yoani, who had brought her laptop from Havana, hurried to access the Internet, surprised by the speed of the connection, navigating, rapt.

When it was nearly dawn, we were taken by the employees of the airline to the plane, but not before their asking Yoani for a rite that would be repeated endlessly throughout the geography of the South American giant, a photo with each one of the officials and workers of the airline which had treated us so well. It wasn’t necessary for us to appear in person to “check-in” to the Salvador flight. It was all resolved without our participation by the effective help of the officials of our “friendly” airline, facilitated by the fact that with internal flights the airline workers themselves can arrange the details.

Rafael Velame, a Bahia journalist and representative of the group from the city “Feria de Santana,” who had participated in Yoani’s reception in Recife and who, along with Dado Galvão, the Brazilian blogger Arlen–an internaut friend of Yoani’s–and me, had protected the Cuban blogger from the crowd paid for by the Cuban embassy, contacted the Brazilians in the Salvador airport who were waiting for us in a minibus, alerting us to the probable presence of demonstrators at the exit to the arrivals hall. As that fear materialized, the friends who were waiting for us prepared a plan to get us out of the arrival hall to the minibus via a side door, and from there took us to “Feria de Santana” a back way, figured out too late by the demonstrators, with no practical effect. We got to see, from the minibus, the protestors trooping to the door that opened our way to the city where Yoani was to offer her first public presentations.

We arrived in the city of “Feria de Santana,” an hour’s drive from Salvador, around noon and were comfortably installed. When the minibus arrived at the hotel in the little Bahia city, there was already a battalion of national and international journalists waiting for us. Yoani climbed down from the minibus and immediately that army of photographers, cameramen and reporters surrounded her. While we filled out the hotel paperwork the “Feria de Santana” friends took Yoani to a space in the hotel lobby where she was surrounded by photographers, cameramen and reporters asking her the most wide ranging questions about her blog, her life, Cuba and the Cuban embassy. From this initial close contact with the Cuban blogger, the majority of journalists and photographers formed a friendship with Yoani, and a good share of them, taking turns, traveled with us in the minibus. 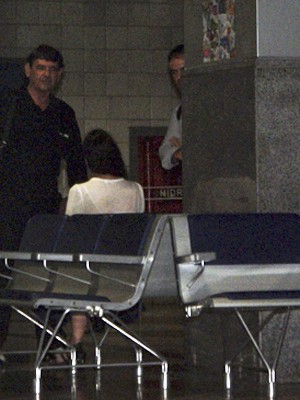 The principal activity for which Yoani had been invited to Brazil was the presentation of the documentary “Connection Cuba-Honduras,” by the Brazilian filmmaker Dado Galvão, in Bahia and specifically in the city of “Feria de Santana.” The event was programmed for 7:00 in the evening of the day of Yoani’s arrival, and was to include the participation of the Brazilian senator Eduardo Suplicy, founder of the Labor Party (PT), the party to which ex-president Lula da Silva and the current president Dilma Rousseff belong. On being advised that Senator Suplicy had arrived at the presentation hall of the documentary, we left the hotel in the minibus and headed to the first public activity scheduled during her visit.

A few yards from the presentation place, our minibus stopped and we were advised that the place had been “taken over by demonstrators” and that we’d have to wait because Senator Suplicy was trying to negotiate with the out-of-control mob, screaming aggressively, even at the senator himself. When the atmosphere calmed down, we were advised to continue to the place and get off the bus. I stood to the right of Yoani hugging her shoulders. The demonstrators, on seeing her figure–already known from the morning papers–broke out into shouts and screams. We, flanked by Brazilian friends and journalists, walked into the small gymnasium and headed to the left. I tried to protect Yoani on my left. A battalion of photographers in front of us formed part of the protective barrier, walking backwards and shooting continuously. Near the back of the gym I spied a glass door where I entered with Yoani. 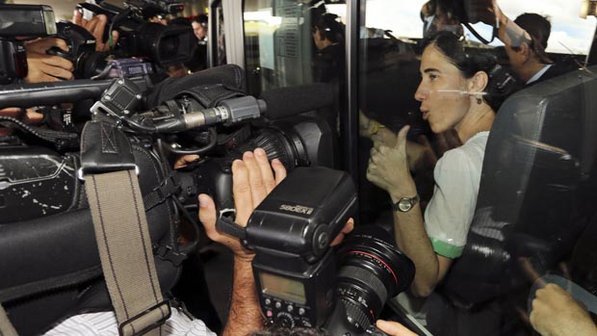 In a little room there were some journalists and photographers along with a few people, among them the local authorities. The mayor of “Feria de Santana” received Yoani with great affection and he welcomed her in those complex circumstances. We sat with our backs to the wall at a table with the mayor. Yoani answered questions about the screaming mob, saying, “I’m used to it,the first ‘act of repudiation’ I saw in my life was when I was 4-years-old, in the tenement where I was born in Havana, against our neighbor who had decided to emigrate. Then, I didn’t understand what was happening, but it was an experience that’s engraved in my mind even today.” The mayor was quite upset and confused. One of the militants of the Labor Party wearing an olive green beret with a giant red star came into the room suddenly and addressed us threateningly. “You have to come out, Senator Suplicy says to come out.” I answered in the same intimidating tone, “Yoani isn’t going to go into that room in the current conditions; it’s not safe for her.” The party member told us, “You have to go out, because the senator said to come out.” Yoani remained silent, but without showing the slightest fear. I told him, almost overcome, “If Senator Suplicy wants Yoani to come out, let him come here and tell us.” The man left the room and when he opened the door we heard the sounds of screams and curses and it was deafening.

After some time, the senator came into the room asking Yoani to come out. I explained to him that “in these circumstances we have no guarantees for her going out to confront the demonstrators.” The senator said that “they” had committed to respect the blogger. At his insistence, I said, “Senator, Yoani and I will come out the door after you, when the door opens you tell them that Yoani will only leave the room if they commit to respect her physically.” Suplicy accepted the suggestion and we walked through the door, Suplicy in front and we two behind him. The Senator made an effort, from the open door, to get the attention of the demonstrators and, yelling, got the consensus to exit.

With me hugging Yoani against the side wall to protect her from the crowds, we headed out, to almost no shouts, to a table arranged at the front of the audience. The table was improvised from several plastic tables pushed together, and we sat behind it, Senator Suplicy in the middle, on his right Yoani, I on her other side and Dado Galvão next to me. The audience consisted about 50 Brazilians interested in seeing the documentary and meeting the blogger, all seated, and about 15-20 demonstrators, all standing, shouting slogans from the early days of the Revolution. Suplicy took the floor and immediately gave the microphone to Yoani.

Yoani stood up and said that she had no fear of submitting herself to questions (alluding indirectly to her lack of fear of the demonstrators), that if this was a demonstration of democracy she was willing to accept it; she spoke about the similarities of Cubans and Brazilians, talked about her blog and other general aspects, giving the protestors the floor to ask questions. Yoani’s security was very precarious in these circumstances. There was a plastic table between her and the enraged demonstrators, standing less than a yard away, such that physical aggression would not be difficult. I asked Yoani to move her chair as far back as possible, where there were bodyguard police.

They begin with the typical charges. That Yoani was a member of the CIA, that she hadn’t expressed herself about the “blockade,” nor about the prison in Guantanamo, nor about “the 5” Cuban spies imprisoned in the USA. They asked about origins of the resources for her extensive international travel, among other things. The demonstrators–all of them–had a paper printed in color, probably by the Cuban embassy, with the written “directions” to the slogans and the accusations being made against the Cuban blogger.

Yoani answered with patience, humor and irony, all the questions and lies about her blog and her life. The more Yoani dismantled the lies of the Castro dictatorship against her, the more enraged the demonstrators became by the lack of basis for their charges against her. One of the leaders of the Roman circus wanted Yoani to sign a piece of handwritten paper for him saying that she was against the “blockade” and would ask for the release of the “the 5” Cuban spies. Yoani refused the proposal, after which we ended the meeting, with 100 points for Yoani and 0 points for the protestors. 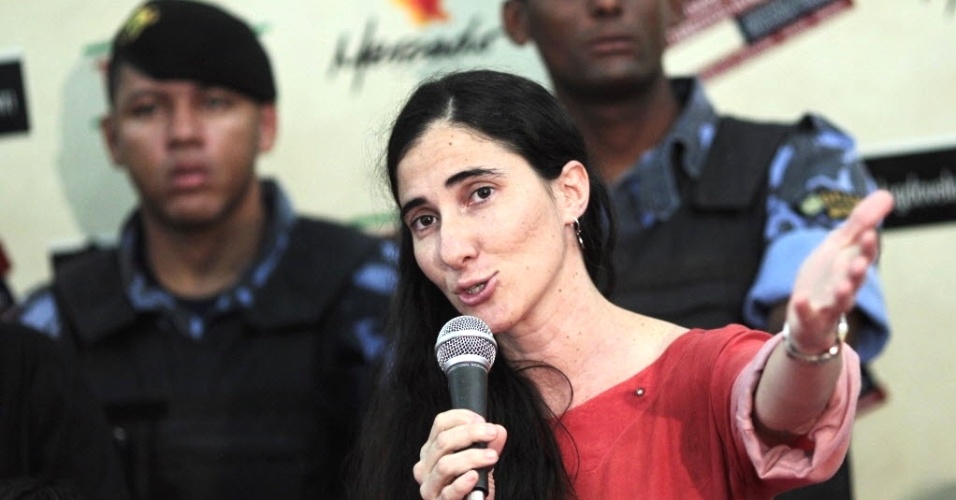 We left protected by a circle of six police bodyguards, surrounding Yoani and me, whom I kept my arms around, this time on my left side, with the sidewall as protection. As we were leaving there were screams, but no attempt to attack her, partly because of the police cordon around us and in part because of the thrashing that Yoani gave them this night. Photos and images from GOOGLE.COM.BR