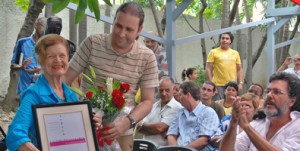 As a teenager I imagined that writers were wise, sensible, creative, focused and responsible people. For me, a poet was a chosen of God in communion with men, capable to singing to the moon, describing encounters with the stars, and shouting the word freedom before the rifles of the tyrant. With the passage of time I met several literary types and discovered the human profile of some poets and writers.

I didn’t imagine, however, that there was a trafficking in praise, a commerce in applause, and even poems and stories made to order. Perhaps in exchange for prizes, publications, trips, and positions at cultural institutions. So I thought until I read an August 14 article in the daily paper Juventud Rebelde — Rebel Youth — by José Luis Estrada Betancourt, “The Poets Are on This Side.”

Incredible but true. The writer starts with a fragment from Declaration of Love by Carilda Oliver Labra, National Literature Prize of 1997, who read this work, and continues with her Song to Fidel, in the recent fair at the Cuba Pavilion where she participated with other literary celebrities in the recital, “With Fidel and For Peace,” organized by the Cuban Writers and Artists Union (UNEAC) the previous day, on the occasion of the Island tyrant’s 84th birthday.

In reviewing the evening, the journalist set out the certainties around the peace of the figures assembled with Carilda Oliver, who came from Matanzas to receive the Youth Teacher Prize, awarded by the Asociación Hermanos Saiz and given out by Abel Prieto, Minister of Culture. The writers lists the names of the other personalities, quotes the worlds of novelist Miguel Barnet, president of UNEAC, and ends with a poetic apology by Nancy Morejón to the despot who calls for world peace after half a century of shooting off canons.

As it never rains but it pours, on Saturday night I saw on the National Television News the faces of Fernández Retamar, César López, Barnet, Carilda, Pablo A. Fernández and other scribblers with more excuses than published books, all attentive to the orders of the Caudillo, ever ready to grab a stick and frighten the sparrows.

If Carilda Oliver re-read her old Song to Fidel, Miguel Barnet repeats the pacifist chant Coma Andante, and Nancy Morejón described the fortune of being loyal to Fidel, it’s all consistent with the Juventud Rebelde reported who affirmed without blushing that “The Poets Are on This Side,” as if the island had only one shore and the mission of the rhapsodies consisted of denigrating a nation enslaved by its enlightened ringleader.

Although time has taught us that some poets sell their verses and write tributes for a crumb of power, we know that on other shores of the island’s geography there are dozens of writers without prizes nor choruses, sensitive and creative people who suffer for a geranium, discover the beauty of the rain, and challenge the campaigns of the despot who convenes the debased.