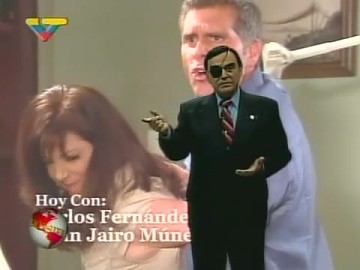 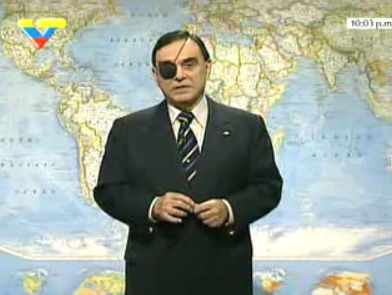 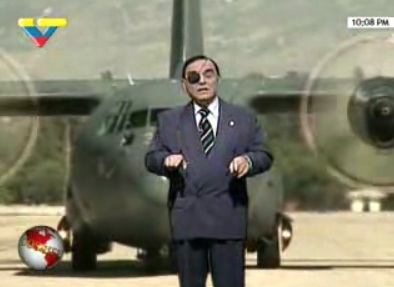 Paid or unpaid, collaborating or not collaborating with technical and artistic professionals, what’s certain is that Cuba is getting along without TeleSur. Fortunately or unfortunately, save in certain “super-authorized” offices, in Havana there is no way to tune in to this great channel whose North is the South and which is supposed to unify the new dawn in Latin America. In telecommunications, Cuba remains in a continental twilight.

But at night a small breach opens in this so-called dike of our Bolivarian brothers. On an educational channel of TVCuba, Walter Martinez appears, summarizing what we Cubans wouldn’t know how to interpret for ourselves. Like a good teacher, or better yet, a nice literacy coach, Walter Martinez unforgettably marks the screen.

Moody and with the throaty voice of a soap opera Latin lover. Enigmatic light of a Hitchcock, terrifyingly anti-hegemonic. Intimate solitude of the magister revolucionarium on the set. And a media patch over his right eye (his mono look is from the left): irresistible symptom that we traffic in pirated information that, in any other way, would never happen on the Island of the Free.

Our WWWalter appears each night with a little of this and a little of that. He doesn’t let anyone talk, but it doesn’t matter: he is the polyglot or he works with a team of translators who move easily from Farsi to Korean to Guarani.

Walter Martinez narrates with objective anti-capitalism the bombings of the day. Democracies dragged down by the Marines. Yankee bases boycotted. Diseases created by companies. Floods caused by the First World. Apocalyptic accidents.  Corrupt leaders. Misery close up. And so on and so forth from a shitty post-liberal planet.

A full hour of the Gospel According to Saint Walter. Cuba trembles at his feet, to the point where many change the channel to avoid the worst. Even the Roundtable show is more palatable, in neurotropical terms. Even the rebroadcast of the rebroadcast of some official speech.

The fact is that Walter Martinez is now our ambassador of ill-will and this deserves respect. He’s even spoken, as friend-to-friend, with the re-emergent Fidel Castro. And it wouldn’t come as a surprise of, sooner rather than later, Cuban TV assigns him his own interview program in the style of Amaury Pérez Vidal.

In my neighborhood I’m one of the few who sees, every night, this slice of censored TeleSur. I don’t do it to keep myself informed, which would be ironic, but out of sheer perversion. I have a hunch hat Walter Martinez doesn’t even see us as people, with his one surviving eye. I have the impression that Walter Martinez, in reality, spies on Cubans through the black patch of his empty socket.

He knows something Cuba is still ignorant of. And that is horrifying. It’s called the marketing of paranoia: Walter Mercado falls short faced with the predictions of Made in Martinez. In this effect hooks you on something for which there is no cure before the proletarian screen of your TV.