From the silence, the impunity, and with the same contempt for the activists who promote human rights in Cuba, the political police triggered the arrests and threats in Havana and other cities in the country, between July 10 and August 12, which coincides with the resumption of activities by ex-president Fidel Castro and the official celebration of his birthday, on Thursday, August 13.

As the press is an area where the real world and that world designed by the ideologues of power meet, it is enough to compare the newspaper Granma and the official media who display the tyrant’s need to be in the limelight on the island, with Cubanet and other pages from exile, that report the daily events from alternate sources, without censorship or half-truths.

To illustrate the repression it’s worth some examples of arrests, threats made to people in their homes and at police stations, beatings behind bars, “persuasive conversations” in offices of the “apparatus,” statements, written denunciations and unusual outbursts, like that of Colonel Samper to Alfredo Guillaume (age 82), to whom he said, “It’s not worth wasting a bullet on you, but we would save resources.”

A reported dated July 26 and signed by Joel Lázaro Carbonell Guilar, leader of the group Human Rights Free Cubans, illustrated with names and recent violations the Articles 3, 9 and 20 of the Universal Declaration of Human Rights, and Articles 9 (sub-paragraph a), 58 and 59 of the Cuban Constitution. According to the activist: “They include acts of genocide and torture against members of civil society, victims of detentions, threats, mistreatment, kidnappings on the public street and being besieged by mobs organized by the political police.” He adds that, “the events remain unpunished and the damage to the injured is not repaired.”

Yoel Lázaro Guilar refers to the cases of Lilvio Fernández Luis, leader of the Comisión Martiana, taken from his house to a cell in Villa Marista; Alfredo Fernández Silva, president of the Partido 30 de noviembre, taken by force from his home and help in a distant place for 10 hours; Juana M. Oquendo Gómez, executive of the Partido Liberal Ortodoxo, detained and threatened in front of her son, whom they detained to pressure her; and the kidnapping of the elderly man Alfredo Guillaume.

The arrests gained intensity on July 12, before the anniversary of the sinking of the tugboat 13 de Marzo (resulting in 41 deaths, including children); the days before the July 26 anniversary, celebrated in Santa Clara; the lead up to the August 5 anniversary of the Maleconazo riot in 1994; and August 12 as a gift from the Minister of the Interior to Fidel Castro on his 84th birthday (August 13). Activists calculated that there were more than 100 arrests on August 5. 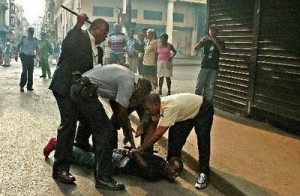 Ricardo Medina, a theologian and representative of the Liberal Catholic Church was arrested on August 4 together with the activist Hugo Damián at the Pinar del Rio bus station, where he was to greet the layman Dagoberto Valdés. He was taken by an official from State Security with Ricardo’s dossier, and freed two days later.

The arrests in July on the Malecon in Havana and on August 5 in the Park at Calzada and K in Vedado, added the names of journalists and independent librarians who enlarged the list of opponents interrogated in Santa Clara, Holguín and Guantánamo.

The siege against human rights defenders in mid-July and August coincided with the release of a dozen prisoners of conscience, and with the media role of Fidel Castro, who retakes the ideological reins of the regime and announces universal catastrophes.