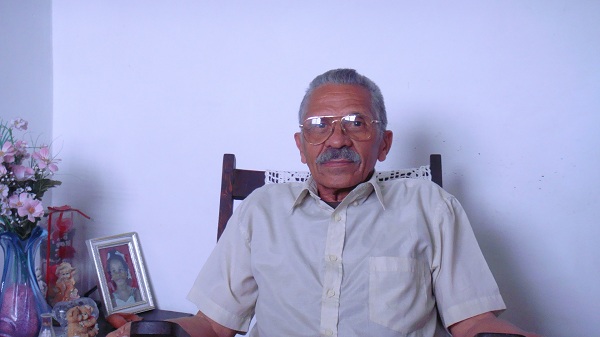 He arrived home on Saturday. After 7 years and 8 months behind the bars of a cell and the creaking of locks, the dissident economist Arnaldo Ramos Lauzurique, 68, at 6:30 in the morning of his first Sunday in freedom, sat in the park facing the modest apartment where he lives in the neighborhood of Central Havana.

He wanted to watch the sunrise, breathe the fresh air and see ordinary people carrying plastic bags for Sunday shopping. He wanted to feel like a free man. After two hours of meditation, the sun began to warm the Havana morning and the sound of children with their bats, balls, skates and soccer balls, broke through his personal spell.

Then Arnaldo Ramos began what was always his daily routine. Joining the long line to buy the official press in a tobacco shop. It is one of his hobbies. Collecting the daily papers and filing them in boxes.

“When I was arrested on 19 March 2003, it was around 9 in the morning, and State Security spent five hours demanding papers and documents,” he says sitting in a mahogany chair.

Ramos, a thin mulatto, short in stature, is well preserved. He is hyper-kinetic, with a fixed gaze and acute analysis. His apartment is furnished in a Spartan style. For the last 45 years he has been married to the doctor Lydia Lima, who is now retired. He is the father of two, with two grandchildren.

He has an extensive history as a dissident. Like other leaders of the current opposition, in the first years of the revolution he had hopes for the project of Fidel Castro. Before realizing they were applauding a fraud, Arnoldo worked in that factory of technocrats that formed the central planning board, JUCEPLAN, an institution that governed the island’s economy and ordered the number of boots, combs and toothbrushes that were to be fabricated every year.

“After graduating in economics in 1971, I started working in JUCEPLAN, with the cream of the economic gurus of Cuban socialism, like Irma Sanchez and Humberto Perez. There I lived, in its entirety, the financial lie, how to doctor the figures to coincide with the interests of Fidel Castro, who skipped all the rules and when some plan occurred to him, however crazy, he sent the draft and the agency had to carry it out to the letter.”

His first problems with the system began with the economic analysis done for the JUCEPLAN newsletter, in which there were some underhanded criticisms. “It was the era of the billions of rubles that the USSR sent us. Waste and improvisation. Burying money in imaginary projects or making purchases in the capitalist countries with super modern factories, which did not accord with the logical development of the country. I remember that in 1978, when thousands of taxicabs were purchased in Argentina, I made the report without ever having traveled to that country,” said Arnaldo, while sipping a powdered orange soft drink .

By 1987 things were already clear to Arnaldo Ramos. The economic system, including the political system, was not working. In 1991 he retired. The following year he began working with another dissident economist, Martha Beatriz Roque Cabello. Together they organized an institute of independent economists. “In 18 years in the opposition, my main contribution was theoretical: to dismantle the government’s complacent discourse and point out the real background of the supposed economic successes.”

On a leaden gray April afternoon he was sentenced to 18 years in prison for insisting in his articles, studies and investigations that the Cuban economy was heading towards the ravine.

Seven years were very hard for a person who was already 60. “Except in Holguín prison, where they beat me, I did not receive physical punishment. Harassment and verbal abuse, yes. It was also a punishment for my family, who had to travel nearly 500 miles loaded with crates, to visit me. Still, I never thought to leave my country.”

He was in two of the toughest prisons on the island. That of Holguin and Nieves Morejón, in the province of Sancti Spiritus. In the past six months, the authorities transferred him to 1580, a prison on the outskirts of Havana.

He was released on parole, a sort of legal limbo that technically allows the government to send him back to jail whenever it wants.” An official of the State Security told me I was free to engage in any activity, and they would not imprison me again. But that was a verbal commitment. There is no document that confirms that.”

Of the alleged economic reforms of the government of General Raúl Castro, the independent economist does not expect anything positive. Nor does he believe that anything important will come out of the Sixth Communist Party Congress, scheduled for April 2011.

The one thing of which he is indeed convinced is that profound changes must occur in Cuba in order to make a leap forward in the economy. And Arnaldo Ramos will be one of those voices for change. Count on it.