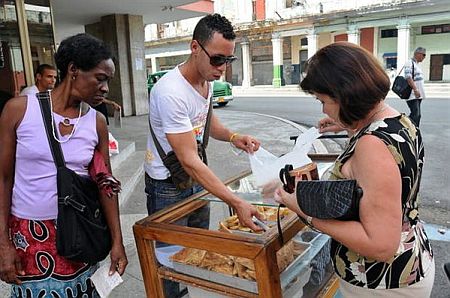 Among the many phrases repeated over and over in the streets of Cuba, there is one that masterfully summarizes the affect of individual interests. Simply saying “they stomped on my callus,” is enough to let us know that they’ve touched someone’s soft spot, a part of himself that will make him jump, protect himself and go on the offensive. However, this same person will very likely remain silent when “they stomp on the callus” of someone else. Only his own pain will cause a reaction. A primer of human behavior, but one which, in certain circumstances,  fosters the selfishness of certain social sectors.

For months now, Raul Castro has unleashed a strong campaign against illegalities which has turned into a wholesale stomping on the calluses of those who, until now, had managed to keep their “feet” well protected. Thousands of inspectors in the street, tickets for fines being handed out right and left, and a general feeling that at any moment the police might show up. Resellers, the corner vendors, families remodeling their homes, self-employed workers and farmers, are  the focus of this crackdown. No one is safe. Dressed in plain clothes or uniformed, the soldiers of this new battle reinforce the feeling of constant surveillance.

Unlike other previous raids, this one has affected virtually the entire Cuban population. To the point that people are saying “the government has declared war on the people.” A crusade that breaks a tacit social compact, fragile, yet crucial to the survival of the current system. A certain level of permissibility for corruption, for the black market, and for the diversion of State resources has been built up over decades as a mechanism for political control. Faking an ideological loyalty to the regime has been the indispensable prerequisite to embezzlement, stealing, adulterating, without serious reprisals. However, the formula of screaming “Fatherland or Death” to ward off the inspectors and the police is no longer working. The stomp on the callus reaches even the publicly declared faithful followers of the Communist Party. Though it’s worth noting, not all calluses are equal… at certain heights, no one will stomp on your feet.

With this new offensive, Raul Castro’s government faces a growing unpopularity. It’s true that looking at the penalized illegalities, they are ethically and legally unacceptable, but anyone who respected the strict Cuban penal code, literally could not survive. Tolerating a certain level of transgression — or what we call “cimarronaje,” the culture of fugitive slaves — is an inseparable part of the the apparatus of subjugation to totalitarianism. Between the rulers and the ruled an tacit accord is established that implies ceding impunity in both directions. In a country where the president himself has had to recognize that salaries are not the principal source of income, the authorities know that tightening the screws against parallel paths of survival would, over the long term, be political suicide. The unwritten contract where citizens pretend to work and the rulers pretend to pay them is in crisis. The fight against corruption and indisciplines has touched a docile, but numerically very large, political sector.

A few days ago a street vendor of desserts, until recently a faithful follower of official politics, approached a human rights activist. With little preamble he snapped, “I want to make statements…” stunning the dissident, who considered this self-employed individual the Communist Party’s man. But the excessive taxes and the constant fines had caused him to change his ideas. “I can’t stop on any corner to sell my cupcakes because the inspector say I’m a roving vendor and I have to keep moving at all times.” Part of the absurdity that prevails in every State campaign is also evident in these raids against misdeeds.

They also “stomped on the callus” of Catalina when the police demanded “the papers” for the bricks and cement with which she and her family were remodeling their home. The illegal origin of all of it led them to offer to pay the official to forget about it. Because the fight against illegalities doesn’t take into consideration that the controllers, auditors and gendarmes also need to survive. Everyone has a price. Skipping a health inspection at a fast food business costs the owner between 200 and 300 convertibles pesos. A certain Housing Institute inspector is known as “Johnny 1500” for imposing fines of that amount, with the intention that the offender will offer a “bite” of at least half. The anti-corruption crackdown creates new forms of corruption.

For now, the alarm spreads, and the warning mechanisms for possible inspections and reporting become more sophisticated. Everyone passes on the alert when “the bad guys” — which is what we call those armed with calculators, ticket books, fines and the penal code — arrive in a neighborhood or workplace. They come ready to stomp on calluses, many calluses at a time. With each stomp, however, the Castro regime could be losing a pair of feet, many feet, which they rely on.