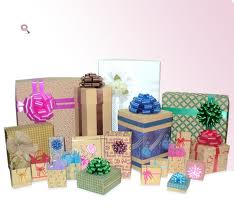 With satisfaction, I watched this week as a friend received an exquisitely wrapped gift. My friend took the package, looked at if for a moment, and tore the paper to take out the contents. Ripping wrapping paper is still a luxury, receiving a wrapped gift is a rare detail, receiving a gift…well, you can fill in the blank yourself.  But when there are gifts, most people give them in ordinary bags of those which have been substituted in many places for ones that are better for the environment, bags that blow away and get dirty, along with the little papers of pizzas or beer cans, until the night before some important anniversary of something that has to do with these past 70 years, when the “cederistas*” — the neighborhood members of the Committees for the Defense of the Revolution — sweep and clean the city and it looks decent for a few days.

Gift wrap doesn’t blow away. Wrapping paper is treasured and recycled to wrap new gifts. Here they sell a metallic paper which is very attractive but difficult to manage and very resistant which has been the solution a second time, a even a third time, for many. My mom who is from an earlier time than I, has always invented a way to make pretty wrappings in an age when without paper there were no gifts.  She saved thick catalogs of wrapping paper that measured, I don’t know, 8-1/2 by 11.  She has those allegorical papers for weddings, Christmas, births, birthdays, couples, and any other event imaginable, in addition to neutral papers and ones in solid colors.  With these little papers my mother wrapped her gifts and they looked great. The catalogs started to get thinner in an alarming way and the lean supply of second-hand paper began. Between the two we developed an efficient technique to hide the wrinkles and folds of their last mission.  It was a thing of trial and error, but we found a way to put the iron at the right temperature, and with a moist cloth in the middle, successfully press this brilliant metallic until it became more manageable.

My mother, poor thing, remained with this fixation. In 2000 she spent Christmas with her sister and nieces and nephews in California, and came back to Cuba with used papers, bows and ribbons that, there, no one understood why she wanted them. They were successful wrappings for the next year and everyone admired and thanked her for them.

It’s not just about the present. Nothing is more satisfying than receiving a gift and tearing the wrapping. Like in the movies.

*Translator’s note: The word “cederista” comes from the initials CDR. In Cuba acronyms are most likely to be pronounced as a word rather than as individual letters, similar to how Americans say “NASA” instead of “en – A – es – A.” So, for example, while Americans say “see – ay – A” for CIA,  Cubans say “seeah.”