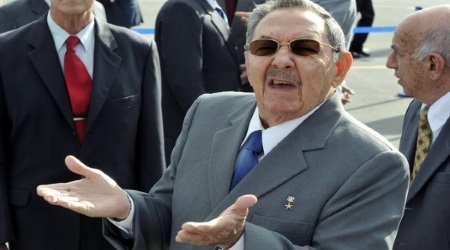 Cubanet, Rafael Alcides, Havana, 26 May 2015 – From a distance I saw them arguing. They were father and son—they could not be heard, but their animated gesticulations spoke volumes. The son, already in his 60s; the father, a captain in the Sierra, who escaped from the Party a while back, is a person I’ve always gotten along with, although we are not intimate friends. Finishing the discussion, the son was telling him, as I approached, “I will not forgive you for that.” And the captain, catching up with me, replied, “Because you’re blind.”

Unexpectedly, he asked me if I believed in the sincerity with which Obama and those people from the European Union (EU) were accepting the “skeleton deal” that Raúl had sprung on them, “unless Raúl is also partaking of those magic powders of Belarmino’s,” he remarked sadly.

As he was also on his way to the farmers market, hopeful of finding a little bunch of lettuce, at least, or a carrot, and because my columns tend to focus on the national situation not from my own viewpoint but rather from what people are saying on the street, I listened to him intently. Given his age, his “Belarmino” quip might be considered a flight of senility, but in the captain’s account, it was quite realistic.

When Belarmino would arrive at a dance, some girl would soon disappear in the darkness for a while, and so would Belarmino. A thirty-something jabao [light-skinned mixed-race man] with a gold tooth, and sporting a linen guayabera even when going down to the river to bathe, Belarmino was the proprietor of the town funeral home. The term “funeral home” here is generous, because in that little shack, nobody ever lay in state. People would come and buy the coffin—built by Belarmino himself—to take away by horse or wagon.

In the town where Belarmino was previously established, and from where he had to flee under protection from the rural police, he “damaged” fourteen teenage girls, and took to his bed everyone and their mothers for he had some magic powders that made him irresistible. In the brief time in which he resided in the captain’s town, he had no chance to use them because very soon the girls were being hidden by their parents or sent to relatives up in the hills; and a lovestricken quinceañera [a girl celebrating her 15th birthday], resisting being sent away, hanged herself. Belarmino became invisible. He was never heard from again.

Perhaps, the captain did not deny, there are in politics powders that have equal powers of seduction to those used by that Belarmino of his childhood. Why did the captain say this? He began to list the reasons:

Upon nationalization [taking possession of foreign-owned properties, businesses and industries in the Revolution’s early years], Fidel and Raúl left the Americans living in Cuba—and the priests, and most Spanish merchants, as well—without even the laces to tie their shoes. They took down God from His altar, implanted a political system that is the negation of everything that had been known in these parts, agitated the political henhouse of the region (because this America of today is not the same as in the 1950s), and now—as if none of this had taken place—suddenly, almost 60 years on, the United States gives in, the EU gives in, the Pope smiles, and Raúl continues to make demands. Besides removing Cuba from the list of state sponsors of terrorism, and reestablishing diplomatic relations, the USA now has to return the naval base in Guantánamo and lift the embargo—and maybe even indemnify it. Could this be understood?

As psychiatrists do, I responded with another question. “Where are you going with this?” And he, in psychiatric fashion, asked me if I believed in the power of Belarmino’s magic powders. He was laughing at me. In any case, for him, the situation was very clear: Whereas the super-powerful United States could impose on Cuba the “skeleton deal”—as in his straightforward way of speaking privately Raúl Roa characterized this relationship—Cuba couldn’t do the same with the US, nor with the EU. And so given that Raúl doesn’t possess anything similar to Belarmino’s magic powder, nobody here should lose hope yet. Nobody, affirmed the captain resolutely. Another thing: Hadn’t Fidel kept until the right time the secret that the Revolution was Communist?

At the farmers market there was nothing green to be found—except for some mangoes going for five pesos per pound, which were already under the effect of some evil liquid that in two hours makes them look ripe on the outside, but on the inside they are acidic and greenish, and ready for pitching into the trash 48 hours later, covered by then with a white mold resembling a sinister cobweb. The captain mourned them, recalling the mangoes of his childhood, when the best of them—the fragrant mango bizcochuelo—cost two cents, and others—including the Toledo mango—could be purchased by the bag, filled to the top, for a nickel. But he did not ask for my view on his theory regarding the Raúl-Obama-EU-Pope Francis issue. Having undergone his catharsis, what could my opinion matter to him?