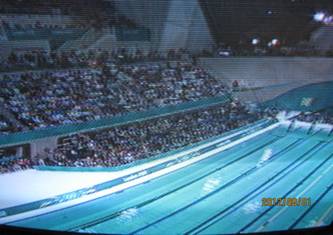 In the case of Cuba, it would all have been great had we not stuck to the old, absurd attitudes in which everything is characterized as battles and combat, or becomes an exaltation of patriotism anda display of jingo-istic nationalism. Rather than earning us respect, it makes us a laughing stock.

No sooner had the team’s flag bearer appeared than the political and ideological positions were taken. There was talk of the nefarious influence of capital, athletes who are treated as merchandise, ideological subversion by the enemy, incitements to desertion, de-ideologizing of our athletes so that they would break with the people, the revolutionary, humanistic and formative focus on sport in direct confrontation with a defiling and selfish ideal promoted by the world’s sports merchandisers, etc.

And so it continued with our sportscasters and commentators, some of whom were reminiscent of impassioned political commisars in the process of ideologizing the masses. During the opening ceremonies they displayed a lack of knowledge about the history of Great Britain (which they could have researched), which prevented them from commenting on what was taking place. Had we not been able to call upon some previous knowledge of that nation, we would not have understood the references to the English countryside, the Industrial Revolution, the health care system (a source of British pride and considered one of the best in the world), modern life, and celebrities from the arts and sciences.

At the beginning of and during the various sporting events they disproportionately focused attention and praise on the Cubans while ignoring the other athletes, even though they were more important and achieved greater results than those from here. During the competitions the Cubans had “hearts too big for their chests.” They were “men and women of steel,” they “ran on burning limbs,” they “climbed Mt. Everest without equipment,” and other such nonsense.

Their bronze medals shone like gold, the silver medals were bigger, and the gold were the most important and historic. Placing fifth, sixth, tenth, etc. were great achievements and deserved applause. In some cases our athletes had competed while sick, without being able to train adequately and without the necessary international trials. The list of excuses could have gone on forever.

Our sportscasters and commentators are not only examples of the ongoing idiocy in our media, but of intolerance run rampant. In an era of globalization, to not understand that athletes compete for the countries where they reside and of which they are citizens, and not for the countries where they were born, shows an attachment to out-of-date and absurd attitudes from the past. It is hardly surprising that a country that thinks this way should be so politically, economically and socially backward.

In the end Cuba was fifteenth in the medal count and, as the official media commentators point out, first among Latin American countries. This should not be surprising to a country that commits large resources to its most promising athletes in the hope of winning propaganda victories.

We Cubans would prefer to be first in other areas, such as agricultural and livestock production, transport services, health and education, respect for citizens’ rights, social co-existence, access to decent housing, and so on.