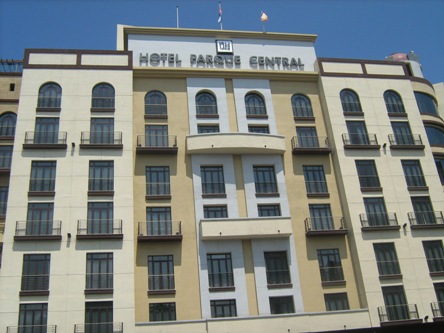 Last Tuesday, March 15th, I went to the Hotel Parque Central, in the heart of Havana. It was my intention, as in previous occasions, and until just a few days ago, to use the Internet, after getting a prepaid card at the rate of a mere 8CUC an hour for a moderately fast connection.

About this point, I’m sure that the more distrustful readers might think “Hey, this blogger is so snobbish! Why doesn’t she go to some other nearby hotels, like the Inglaterra or the Plaza, offering a somewhat cheaper, though extremely slow service?” The reasons are several, but the simplest are self-explanatory: The El Inglaterra hasn’t offered Internet service for months, and the clerk can’t give an explanation; The Plaza does not allow uploading from flash memory, which forces the user to compose while online, which makes it expensive. In both hotels there is an absolute lack of privacy, since the internet service is located only a few centimeters from each other, in spaces extremely small. Finally, neither one of these hotels allows the option to connect via Wi-Fi, which requires the use of their own equipment and keyboards, in a sad technical state, not counting other possible maladies that I prefer not to mention.

Anyway, back to the subject, I went to the protocol desk at the flashy Parque Central, where they usually sold cards, and asked for my ticket for a mere hour of information, to which the young man who “was seeing to providing service”, with his Little Red Riding Hood kind of candor, asked me tenderly if I was a guest (you really have to have a mind as thick as a coconut tree to ask an obvious Cuban national whether she is a guest at a five-star hotel in the capital, no matter how faintly those stars may shine) I smiled, condescendingly, (a lot more than a young man speaking like a trained parrot is needed for my patience to run out) and I asked him when the hotel had stopped making the service available to the public, since I had used it a couple of weeks prior, to which the little shoot responded, unperturbed and all at once, with his little mouthful chuck full of little lies, which had probably been rehearsed a thousand times: “We have very few cards and we have to guarantee the service to our guests, this is the high season and the hotel is full. Guests have been complaining about the lack of cards.” I couldn’t contain my laughter, “Oh, sure, fine! And I still hung around the almost deserted mezzanine in order to appreciate for myself the presumptive “high demand” that was eating up all those cards: obviously the guests don’t appreciate the true value of the quality of the connections at the hotel. On the railing across from me, a security employee (of the hotel?) discretely watched me. Perhaps attributing to me the inclination for begging, he feared that I would fall into the temptation of asking some hotel guest to buy the damned card for me. As if some official restriction could lead me to such a humiliation! Finally, I went somewhere else, was able to connect, send, and download the information I was seeking.

This seemingly insignificant story is testimony to the evident official intention of boycotting the already restricted Internet access to Cubans, and the complicity in it of some recognized hotel companies. I could not swear that the ban on the sale of a card is specifically directed at me: this would be easy to check by just asking another Cuban, unknown to them, to purchase it for me. The trick — no argument here — about the shortage of cards could not be more stupid, because the issue could easily be solved by simply issuing more of them in order to provide better service. Nor should it be a coincidence that the incident took place when the government media is orchestrating a campaign of misinformation and misrepresentation against “certain elements who want to subvert the order through the free flow of information”, a formulation which carries within itself a confession of guilt. It is also part of a strategy as old as it is obsolete, forcing bloggers, independent journalists and other sectors of society to benefit from Internet services, offered free and in solidarity, by some foreign friends: a chance to demonize individuals, governments and countries and feed the old rhetoric of a small country beset by external enemies.

More of the same, but, at a time when dictatorships seem to have every reason to fear the power of technologies of information, and communications at the service of much trampled civil rights.