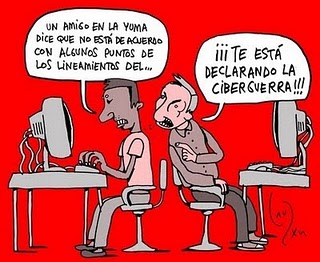 Source: Guama
1. A friend in the US said he doesn’t agree with some of the [Communist Party] Guidelines for… 2. He’s declaring cyberwar on you!!!!!!

Today we woke up to the Government’s onslaught against the Rebel Bloggers of the Island, with a two-page article in Granma titled, “Cuba’s Reasons/Special,” and the most special is the cynicism assumed at the highest level which we can’t get used to, when they assert that there “are more than 200 blogs on the Island, administered by professionals from different fields, who confront the slander, distortions, manipulations and lies of the cybermercenaries.” Not one of them could share a personal opinion that goes against the official dictation. An army of robots who think in one direction, and when they dare to step beyond the official line, we witnessed what happened with Eliécer Avila, a student leader at the University of Information Sciences (UCI), and recently another student at the same institution who was expelled for giving an interview to a blog in Spain.

In many cases there are “opportunistic professionals,” like the one who congratulated me for a post where I denounced the misery of Cuban intellectuals who make trips abroad and practically have to beg for food; he mentioned himself as an example and told me of such situations on his travels and then, the same “professional,” at the request of an official, came up with an aggressive response and wrote the exact opposite of what he had said to me that night, in front of witnesses. And yet, in my innocence, I asked a mutual friend what had happened, and with the greatest understanding he explained to me that in “tribute” he would get better work.

The journalist who gave his name to the article, made broad generalizations, confusing it with his own conduct, calling us “mercenaries.” He denies that we are independent, claiming that we act “entirely at the direction of and in the interests of Washington.” He accuses of us being backed by the United States Interest Section, where I have never even visited, nor have I had any relations with any of their officials inside or outside their offices, much less received payment or equipment for any personal interest. And they can corroborate this with their own puppet shows, their so-called national spies, who are nothing more than a part of this media show in bad taste which make a mockery of the supposed Organs of State Security.

I remind the journalist that before opening my blog I was approached by the then President of the Cuban Book Institute (ICL), Iroel Sánchez, so he could give me a cyberspace to anchor my blog, and then he asked me what the theme of the blog would be, and on learning from my own mouth that I planned to bring my point of view about the reality surrounding me, he categorically denied me any such possibility.

The digital daily Cubaencuentro gave me a space for my incursion without asking any questions about it, something I was always grateful for, but such an approach garnered the discontent of the Officials of Culture in Cuba, advised by the Political Police, and as punishment they closed my personal email account paid for monthly to the Ministry of Culture, which I thought not only was my right, but I thought worthy of my intellectual journey.

Then I was disconnected from the cultural institutions of my country. Mysteriously, soon after I was assaulted by do men who warned me: “Don’t become a counterrevolutionary.” And every outrage increased my will to blog, reaffirming my need to communicate my thoughts and ways of seeing events, and in particular focusing on national issues.

As if that wasn’t enough, they started to rain various accusations on my which, suspiciously, were not accompanied by evidence or witnesses to the acts they charged me with, on many occasions the alleged complainants didn’t even appear. It would just be a cop claiming I had raped a woman, threatened a man, hit a child with my car. Later they manipulated people very close to me, detaining for several hours my personal friends who had nothing to do with my incursion into cyberspace, with the intention of interrogating them, wanting to know if I received money from the United States Interest Section, visits from foreigners, etc, all with the greatest cynicism in trying to frighten and asphyxiate me to get me to abandon the plan to continue blogging. I even received a Prosecutor’s inquiry, over a year ago, for which the years in prison for the supposed offenses would have been more than fifty.

I recognize that every attempt to shut me down, stop me from blogging, sets off an opposite reaction. Every effort that they made just reaffirmed for me more the need to show that institutional abuse doesn’t always get its way, and that we are willing to take all the abuse and slander that they hand out. I don’t care about losing the national cultural space I had won, the “friends,” their breaking my bones, not even locking me in jail for the rest of my life. Indeed, I have already lived 44 years in this great prison they have turned our Island into.

I affirm that I am proud to be in this group of young people who say, honestly, what they think, and that I flee from those 200 revengeful “Professionals” who insisted in multiple invitations that I join them. (Today I received a message from Yoani Sánchez and Reinaldo Escobar wishing me luck because last night on television my name appeared among the list of dangerous bloggers.) It all reminds me of movies about the old west.

I’ve written several times for the opportunity to take part in the space “Cubadebate” and at least to be able to post my blog with complete freedom as I have done to date, so that this site will become a true plaza of intelligent and plural debate, to exchange points of view without aggression or disrespect. And to arrive at a national dialog that has been absent as long as I’ve been alive.

But I have to regrettably acknowledge that this would be a sign of democracy which to them, the cyberwarriors, is unknown territory.