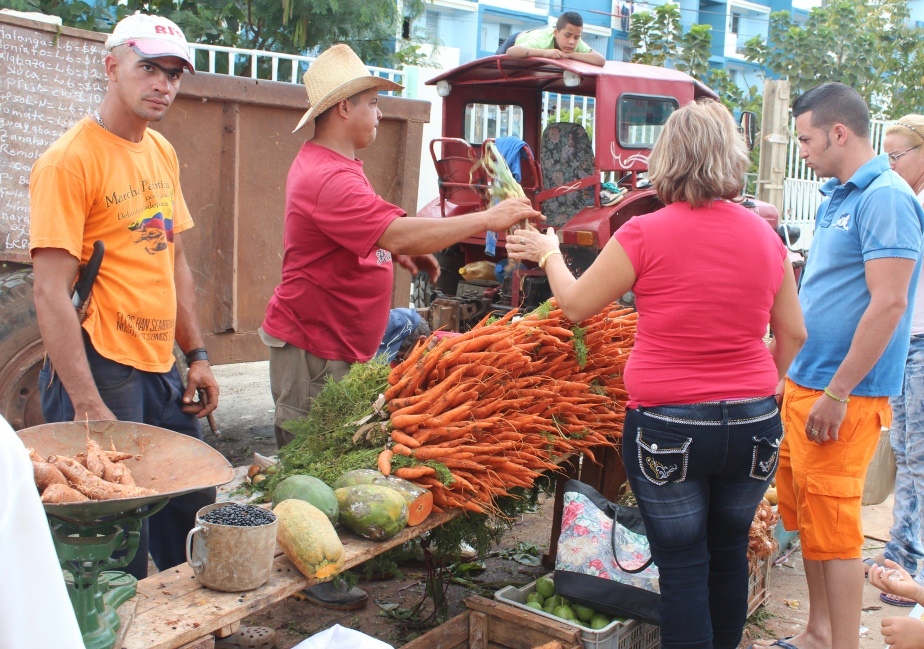 The last time I was in the farmers’ market, a couple of days ago,I saw various things on offer which I don’t recall seeing since I was a kid. It was in the mid-80’s that this market – at least in Artemisa, where I live – had its “golden age”. But the economic strategists disrupted the prosperity of the most entrepreneurial and consistent producers and they stopped right then and there, so that the ability to largely meet public demand which was the case a few years previously, was, at the beginning of the following decade, past history.

During the years following that brief period, the farming sector saw itself, most of the time, prevented from expanding its production as a result of laws which already effectively limited its productivity and threatened the results of its hard work. Up to the present day laws remain in force which give the Prosecutor’s Office the power to confiscate, without much ado, the estimated gains of a producer who is doing too well – and it is obvious what effect this has had on the enthusiasm of those who find themselves at the wrong end of this process.

Several attempts to sort this out were tried by the state — the “Food Plan” of the ’90’s included — among which the wobbly Credit and Services Cooperatives stood out — including their “stronger” variant — which never managed to guarantee a constant, stable supply for the people, as normally they were unprofitable and unviable, falling most of the time into net losses.

Along with the mismanagement of these organisations throughout the country, there also existed another enormous obstacle to produce arriving on the Cuban table: the proven inefficiency and irresponsibility of the state supply company.

The Cuban state monopolised the process of supply in a single company, and in its war against intermediaries eliminated the entire chain for transporting the harvest, leaving this activity almost exclusively in the hands of an entity which, citing lack of fuel, tires, transmissions, or whatever consumables, year after year, has left thousands and thousands of tons of food to rot in the fields.

Inevitably this had profound consequences: the markets continued to be without supplies and with prices going through the roof, production was depressed and plates waited anxiously for food which never arrived.

Now it is not about again taking on the intermediary that transports commodities from the field — because that is just one more activity, that all the producers cannot take on because their activities are so time-consuming.

In order to combat speculation they should create mechanisms that regulate, dynamically and realistically, price policies. But before that the Cuban state has a serious account pending with its people: first of all it should lead by example and adjust its irrational and hostile pricing policy perpetuated in the retail trade and not empty our pockets on collection days.

I have here an excellent first step to take in order to try to normalize everything! Only as the prices imposed by the State stop being scandalous will the peasant have an incentive to lower prices, as scandalous as those, at his stand at the market.

But apparently Raul Castro’s policy, slightly more pragmatic, has already yielded some fruit with regard to the food supply, although it has not happened with all due haste. As I am not an authorized voice, it would be worth listening to the producers’ criteria on this matter, but, judging at first glance, the circumstances today seem different, although the situation is not the same across the country and not all townships have the “privilege” of Artemisa — I have confirmed the great affluence of the regulars from the municipalities surrounding my town’s market.

To the extent that we move away from the capital, the more we look to the east, the more obvious is the deterioration in the quality of life and the greater the decline in agricultural products.

I think everything here is above all a matter of focus, the way to meet our demands could be much shorter than supposed as the example of China demonstrates: from the time Deng Xiaoping determined that the ability to hunt mice was more important than the color of the cat,very few years elapsed before there were tangible results in food production.

The same thing happened in Vietnam — looking at production schemes similar to ours — they substantially increased production when they opened the doors to the small family business.

Ah! But something happens in such cases which is fundamentally different from what happens in ours: Vietnamese producers can go abroad when they need to buy their own supplies and a Chinese businessman may, no one should be shocked by that, amass a personal fortune if he does it by legal means.

And that is what it’s about: it would be much better for the Cuban state, rather than trying to supply all our products, something that has not achieved, so it has had to authorize them to be imported directly as needed, when it has the means to do so, it would be much better to accept that “… to get rich is a duty, whenever it is done by lawful means …” Those are the words of José Julián Martí, not mine, and consistent with his thinking we should reshape our thinking so that we will no longer see all the fruit we cultivated for years with our own hands evaporate overnight.