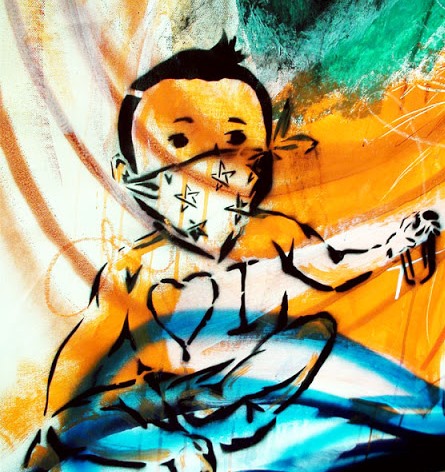 Nights in Old Havana are always loud. Each carrier rocket shakes the old rocks of the almost sunken buildings. The canals with black waters, which run across the archaic streets, light up with the gleam of oxygen and hydrogen in combustion. The water, mixed with petroleum from the old Soviet cargo boats, vibrates and flutters with every take-off. Like gigantic flares, the Protons-II rockets light up the old parts of the city with every departure. They bruise the sky of Autonomous Havana and disappear into the cosmos monopolized by the Russians.

Up there they have the space stations, the satellites with nuclear warheads, the servers for the Global Neural Network, the whole Russian way of life, as those balseros(i) in Florida say. Down here illegal immigrants sleep in the corridors at Almejeira hospital and work on the platforms in Underguater for four kopeks. All of them with the hope of getting into one of those rockets that will take them to the Romanenko station. Or any other. An entire life of sacrifice just to be like one of the Russians. Another tovarish.

But you know very well that that, more than a dream, is a fantasy. That the Russians never treat anyone like an equal. That you end up being another immigrant in another place. Another foreigner in a strange land.

You, too, became a victim of that fantasy. You lived in a city in chaos, after a hurricane sank everything and forced everybody to start shooting each other. You went up there and you never looked back.

Now the chaos is organized. There are abakuas(ii) pacifying Old Alamar, Santeros(iii) in Downtown, and Babalawos(iv) in Vedado. Investors of religious corporations in Miramar, and the FULHA that watches over the old fortress in La Cabaña. FULHA: The emergent force that tried to make use of the army, police, and government, but in the end it just ended up becoming another force fighting in the midst of anarchy. Nobody rules over Havana. There is no order in this city. But, at least, there’s less chaos.

And you came back. Not looking for order or chaos. You came back because you had no choice. Because there is no better place to be than home. And Havana, even if it’s Hell, is your home.

You came down in one of the last landing capsules left. You fell in Puertohabana Bay thanks to the good aim of your Russians tovarish. You were rescued by the Marine Cost Guard. Last time you heard anything about them, they were a FULHA special unit. Now, who knows.

The FMC speedboat zigzagged through the street of Old Sunken Havana until it arrived at the Cathedral. There, in the space station pier, they left you in the hands of some guys from Russian customs. They finished the papers and offered a boat to Underguater or Vedado. You said no.

You are now legal in Autonomous Havana. When you left, you were a mere Cuban citizen. Now, you have a Russian passport that allows you to enter and leave this city-State that you barely recognize anymore.

You look at the ocean, the sunken buildings, the layer of petroleum that moves in unison with the water.

‒Should I call you a cab, comrade?

‒A boatman that will take me to Sunken Cayo Hueso will be enough ‒you say while you give a ruble to the employee of the space station that rests over the old Cathedral‒, and don’t call me comrade. Please.

READ THE REST OF THIS STORY IN SAMPSONIA WAY MAGAZINE, HERE.