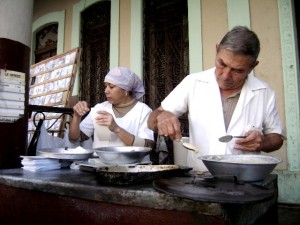 HAVANA, Cuba, 30 August 2013, www.cubanet.org – Resolution No. 32 of 7 October 2010, issued by the Ministry of Work and Social Security, relaxed private work with the approval of 181 activities of self-employment.

According to the newspaper Juventud Rebelde, on 17 August of this year, at the end of July licenses has been issued by the National Tax Administration Office (ONAT) to 436,342 people.

In a year and a half there was an increase of 110,395 Cubans who established these private micro-enterprises or contracted as workers of these small businesses. The government has directed — in the official press and satellite organizations, like the unions — that what, in reality, is private activity with owners and employees, is to be called self-employment.

At the end of July, the private businesses with major expansions were the snack bars and restaurants, cars and trucks engaged in carrying passengers and merchandise, and the renting of rooms and houses. These businesses account for 29% of the total. 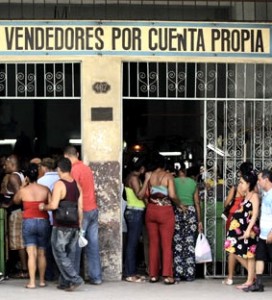 Cuba already has an incipient sector of private micro-enterprises. Of the total licenses issued by ONAT, 18% are to contract workers. Of them, 68% did not previously work for the State. Now they work as wage-earners for owners of private businesses.

The greatest number of people with licenses for self-employment are concentrated in the provinces of Havana, Matanzas, Villa Clara, Camagüey and Santiago de Cuba, which account for 65% of the licenses awarded in the country.

In the capital, at the end of July 110,000 people were engaged in private activity. In the municipalities within the capital, the greatest number of licenses were in Central Havana, with 10,479; Playa, with 9,915; Plaza, which registered 9,724; and Rancho Boyeros, which reports 9,514.

Materials on the black market

The government has not guaranteed the opening of wholesale markets so that the proprietors of these small businesses and micro-enterprises can acquire inputs to make their activities less onerous. To be able to keep their businesses open and meet their excessive tax obligations, the self-employers have not other option than to acquire resources on the black market. This means that the prices at which they sell their products and services are not within reach for the majority of Cubans, whose salaries don’t exceed 20 dollars a month.

One element that has contributed to the capitalization, expansion and sustaining of private activity in Cuba has been the sending of family remittances from abroad. In the great majority of cases, they have made it possible for locals to cover the expenses of their businesses, buying inputs under the table, or on the hard currency stores — called “Stores for Collection of Hard Currency” (TRD) — at prices with a mark-up of 250% of the actual value. 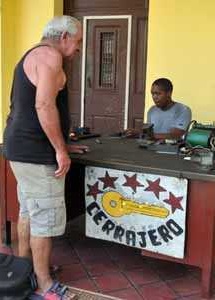 Though the government doesn’t report it, at the end of last year the remittances from Cubans living abroad, principally in the United States, totaled 2.605 billion dollars.

If this amount is added to the value of others items sent — food, medicines, appliances, clothing, shoes and trinkets of all kinds — the figure would rise to 5.105 billion dollars.

Last year, remittances to Cuba greatly exceeded the revenue from tourism (2.613 billion dollars), nickel (1.413 billion), and the sale of medicines (0.5 billion). Indeed, if the costs of each item were known, the difference might be significantly greater. 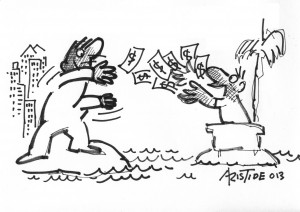 The Cuban leaders, although they remain silent, know that relaxing controls on private activity has exponentially fostered the sending of remittances. This money contributes to the financing and consolidation of private micro-enterprise in Cuba, which even with its limitations, and despite all the obstacles imposed by the State, today constitutes the only moderately successful element of the reforms.

Osmar Laffita, Holguín, 1945. Merchant marine for 20 years. In 1991 he began working in tourism and did so until 1994. In 1993 he joined the Democratic Socialist Current, and in 2007 linked to the Democratic Solidarity Party. Since then he collaborates with Cubanet and Primavera de Cuba. e-mail: ramsertgandhii@yahoo.com