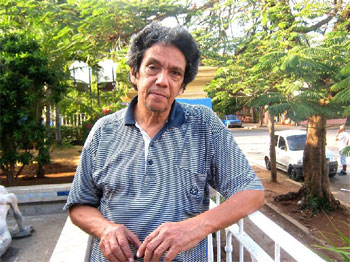 HAVANA TIMES — For months I had wanted to interview Reinaldo Escobar – the blogger and moderator of an audiovisual panel discussion project called Razones Ciudadanas. He’s also the husband of blogger Yoani Sanchez, who is currently on an international tour.

We met up at a cafe in the upscale Miramar district and before I could pose the first question, he summarized his life.

Reinaldo Escobar: I was born in Camaguey in 1947, I graduated in journalism and I took five post-graduate courses in Marxism.

At the end of my studies they wanted to kick me out of school for being smug, hyper-critical, immature, and having literary tendencies. The punishment was to send me to the Centennial Youth Column in Camagüey – not as a cane cutter though, but as a journalist. I stayed there for eighteen months.

Later I worked for the magazine Cuba Internacional, and afterwards at the Juventud Rebelde newspaper. After a year and a half, on December 18, 1988, I was told in a meeting that I couldn’t continue there or work in the field of journalism any more in Cuba. I was transferred to the National Library, where, along with others, I requested a meeting to discuss the agreements of the Fourth Party Congress. We were met with a “repudiation meeting” and I decided to leave.

Then I was an elevator mechanic and a librarian at a technological institute until 1994. That was my last government job. Then I taught Spanish to foreigners. In 2004, I founded, with other friends, the magazine Consenso, which evolved into the digital portal Desdecuba. There I learned digital journalism with Yoani, and I started my blog.

Read the rest of Part 1 here.

HAVANA TIMES – Journalist Reinaldo Escobar was booted from the official Cuban media back in 1988 but he has continued writing his critical commentaries most recently on his blog desdeaquí.

The husband of blogger Yoani Sanchez, one of the 100 most influential persons in the world according to Time magazine for 2008, is currently minding the fort while Yoani is off on a worldwide tour. The following is part two of our interview with Escobar. See part one.

HT: Why remain a Marxologist?

Reinaldo Escobar: I think that Marxism is subversive in Cuba today. The official Party policy on economics is anything but Marxist.

HT: However aren’t the economic changes taking place in the country are going in the right direction?

Reinaldo: Yes, but they are not Marxist.

HT: So Marx was wrong?

Reinaldo: At that moment in time, no, but his theories are no longer applicable. Marx said practice is criterion for evaluating truth. Practice shows these ideas do not work. My friend Victor Fowler says you have to start thinking about infeasibility being a constant feature of the socialist system.

Read the rest of Part 2 here.