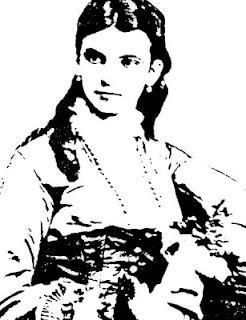 She was a Virgo of 17 years. A Latin American virgin, (not by whim is she called Maria), a vision of the succulent jungles of Guatemala, popol-vahgina* martyr of love. Signing exclusively for a twenty-something Jose Marti as no one ever on earth was going to dare, as no one ever possessed him: Tu niña… she signed, your girl.

“Tu niña,” almost the title of an unwritten novel, unwriteable. She was the daughter of a general. She was the daughter of a president. Quetzal that perhaps should have been the Eve of the then unknown Cuban nation (even of today’s unrecognizable Cuban nation). Pupil who from her desk would surrender herself open in soul and body, so that she be swallowed and later birthed by the impetuous little professor Marti. So he could split her life into a before and an after him. So he could split her dry, moist.

Maria Garcia Granados, crystallization of time and apocope of the truth. She had no need for his grandiloquent oratory. It sufficed knowing how to see him (mine him) without demagogy of adults, nor delight of the adulterated, nor the crime of adulterers (and this last Marti always was: for the extreme of calamities, between culpability and repression). Only she knew the genetic miracle to save him from himself, to stop time, with the independence of their two inconceivable hearts, that extended between the night of the thousand and one deaths that followed (still to come later).

I am certain they slept together. I am certain they did it standing up. In an incredibly lovely river scene, with an epiphanic (epiphalic) light, beneath the copious canopy like an ovary that covered the sky of the isms (enslavementism, abolitionism, autonomism, reformism, annexationism, colonialism, independentism, imperialism, republicanism, liberalism, conservationism, capitalism, syndicalism, socialism, communism).

I am certain in such a setting they fucked more alone than the first couple on earth, without violence and without anxiety, without maelstrom nor vileness (although later the archetypal Martian goodness had been no more than that: despotic dualisms where we all democratically fit, on a par that nobody fit but he, He).** It must have been a copulation in more than one asexual sense, without genders (she the girl-man who could be nailed in the center of her spiritual axis by the woman-boy who he always was): Marti and Maria “machihembrados“*** at the margin of the history of humanity as told by its so gloomy tribunes (and he ended up becoming one of the most pathetic).

I am certain it was in that same river that she would go the following spring and contract tuberculosis, when he impotently betrayed that freedom of procreating birds, in exchange for a bed of curdled milk in the intimate ill will of every matrimonial bedroom.

Marti killed her with impunity. Worse: he forced her from afar to kill herself, with his insolent diplomatic immunity. Two decadent decades later, he would repeat the same formula of Maria with the nation he invented for himself for lack of real people to love. Apostles are just that: they instigate for mere instinct to disappear afterwards. They found only to burn out and flee at the hour of truth. And instead of accomplice bodies to be contemporaries, they leave instead opportunist little poems with a rhyme of two by three, birthday prosody (memorizable by boys and girls not yet literate, if not barely the literary hope of the world), verses from the prudish to the perverse, written in the miserable middle of the night with the back turned toward their spouse out of conviction, who knows if out of convenience.

In the end, the young Jose Julian chose the word and not the person. Ideas before lives. The chronicle of his crime: his contemplation in silence, which is more cowardly than perpetrating it (the rhetoric and not the redemption). Perhaps he thought himself too grand to have something small to do (and Maria was small in spite of being so tall, little-ious, diminutivest: because “tu niña . . .” is also the promise to never grow up).

There it ended, with his epitaph he sank verse by verse like a human being light of the future.

There it ended, a no-man being opaque with his suit weightless and his baldness of calvary, in countless cadavers in cloisters of marble, than in the midst of the 21st century we continue hiding in the closet of that Revolution. Perhaps for that reason the young Marti y Perez did not merit leaving fertile decsent (he flew like Matias Perez****, in disposition and genes), paying his discursive gift of impotence with the stigma of sterility. Lovelessness with lovelessness is paid. Lovelessness with lovelessness is native land. Forgive him, Maria, for he knew all too well what he wasn’t doing.

Translator’s notes:
* Popol-Vah: an ancient Guatemalan text
**Considered to be the “Apostle of Cuban Independence” for his role in Cuba’s 19th century battle against Spanish dominion, Marti was a fervent proponent of an independent and democratic Cuba.
*** Machihembrado is the Spanish word for woodwork that is assembled using tounge-and-groove or dovetailing. The origin of the word comes from a synthesis of male and female (macho y hembra).
****Matias Perez disappeared after boarding a hot air balloon in Havana on June 28, 1856. Since then, when someone disappears, people say: “Volo como Matias Perez” (He flew away like Matias Perez).