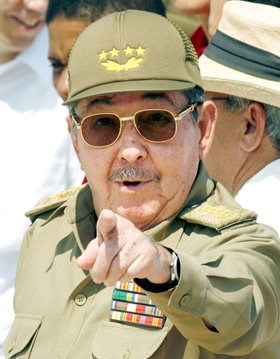 “Today marks 21 days that I haven’t taken a drink…” said a Beny Moré song we listened to back in the 50’s. And today, if my accounting doesn’t fail me, is 21 days since our general-cum-president has made an appearance. Several foreign dignitaries have passed through Havana, the rains have converted some of the country’s eastern and central villages into real disaster zones; national and foreign events worth some statement or other have occurred, and yesterday he turned 81, but the Party First Secretary does not appear.

I’m not complaining about what might be seen as a virtue, especially if we compare it to the omnipresent media style that characterized the retired brother, but the desire not to be a star has its limits, and should not give the impression that the national ship is without a helmsman.

Perhaps we will have to wait for another visit by Hugo Chavez to his Cuban medical team, or another session of the Council of Ministers to produce him, but in any event this July 26, emblematic date of the Revolutionary process, on which he will have to show his face.